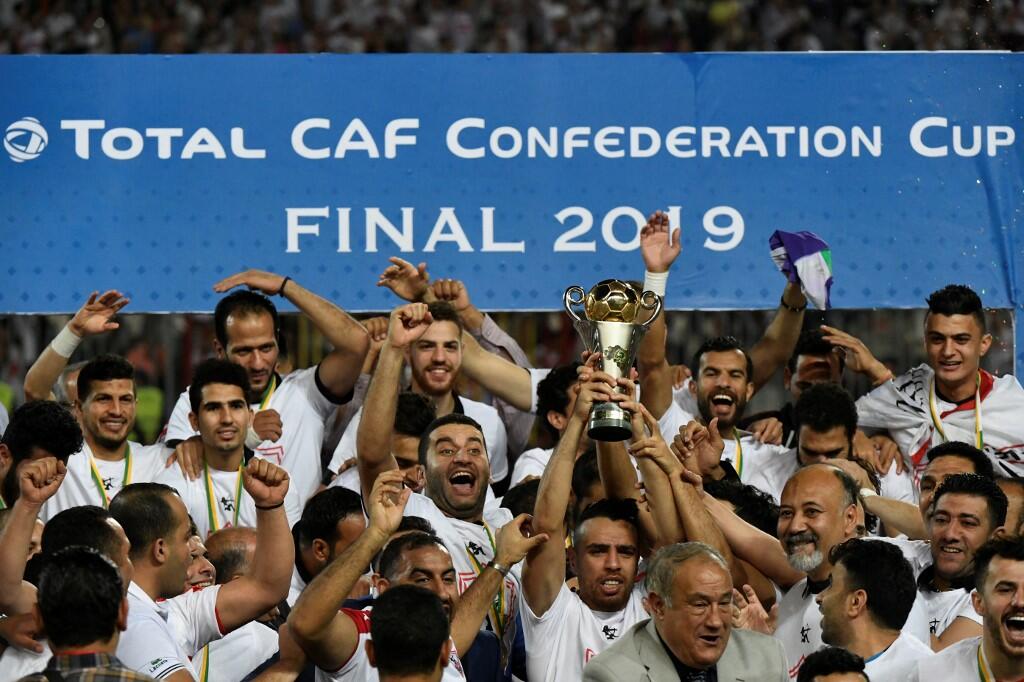 Zamalek clinched their maiden Confederation Cup title after beating Morocco’s RS Berkane 5-3 on penalties following a 1-1 aggregate draw in Alexandria on Sunday to end a 16-year wait for an African title. A penalty awarded following a VAR review was converted by set-pieces specialist Mahmoud Alaa in the second half to level the aggregate score, undoing a brave approach by Berkane.

Chances were few and far between, with Zamalek struggling to carve out openings despite their territorial dominance.

But the match was not short on drama, with Berkane having in-form winger Omar Namsaoui dismissed in stoppage time following another VAR review, with cameras showing him catching Zamalek’s Mahmoud Kahraba in the face with a flailing arm as both men tussled for the ball.

There was one last VAR intervention which could have proved crucial as the match went directly to penalties.

Hamdi Laachir fired wide in the first spot kick for Berkane and after Khalid Boutaib netted for Zamalek, the visitors had their second effort saved by keeper Mahmoud Gennesh.

However, Ethiopian referee Bamlak Weyesa was told by the video assistant referee that Gennesh had stepped off his line, ordering a replay as Ismail Mokadem netted on the second attempt.

But Zamalek converted their remaining four spot kicks, with substitute Ahmed Sayed scoring the decisive one to spark wild celebrations at the full-capacity Borg El-Arab Stadium in the Mediterranean city of Alexandria.

It’s the first time for the White Knights, who won the prestigious Champions League five times, to put their hands on the trophy of Africa’s secondary club competition, their first continental triumph since they beat Morocco’s Wydad Casablanca in the 2003 Super Cup.

They can still aim for a remarkable treble as they also compete for the Egyptian Premier League and Egypt Cup titles.

Zamalek completed a superb turnaround after their poor start to the group stage saw them collect just two points from their opening three matches.

On Sunday, Berkane took Zamalek by surprise with their bold approach in the first half, pressing their opponents high up the pitch rather than defending deep.

Although that approach could have cost them as early as the seventh minute when Zamalek’s deep-lying forward Youssef Ibrahim somehow volleyed over the bar with the goal at his mercy, they were largely comfortable at the back.

Berkane also unsettled Zamalek’s backline with their repeated long balls to burly striker Fo Doh Laba, whose tireless moves down both flanks kept the defenders on their toes.

In the sixth minute, the Togolese, who scored a last-gasp winner in the first leg, shook off his challenger on the right and sent in a low cross that eluded central defender Mahmoud Alaa and found Hamdi Laachir but he blasted it high over.

Zamalek were livelier in the second half, although they still struggled in the final third.

The opening goal came out of the blue in the 55th minute when an innocuous low shot from Ibrahim Hassan was blocked by the arm of a Berkane defender just inside the area. It was awarded a few minutes later after Kahraba and midfield linchpin Tarek Hamed repeatedly asked Weyesa to check a video replay.

A winning goal was elusive as the match was decided by the nerve-jangling shootout, handing Zamalek a title they long craved.