In a quiet alley off the noisy main street in Beirut’s Gemmayzeh neighborhood, past a quiet walled courtyard with shady trees and a gurgling... 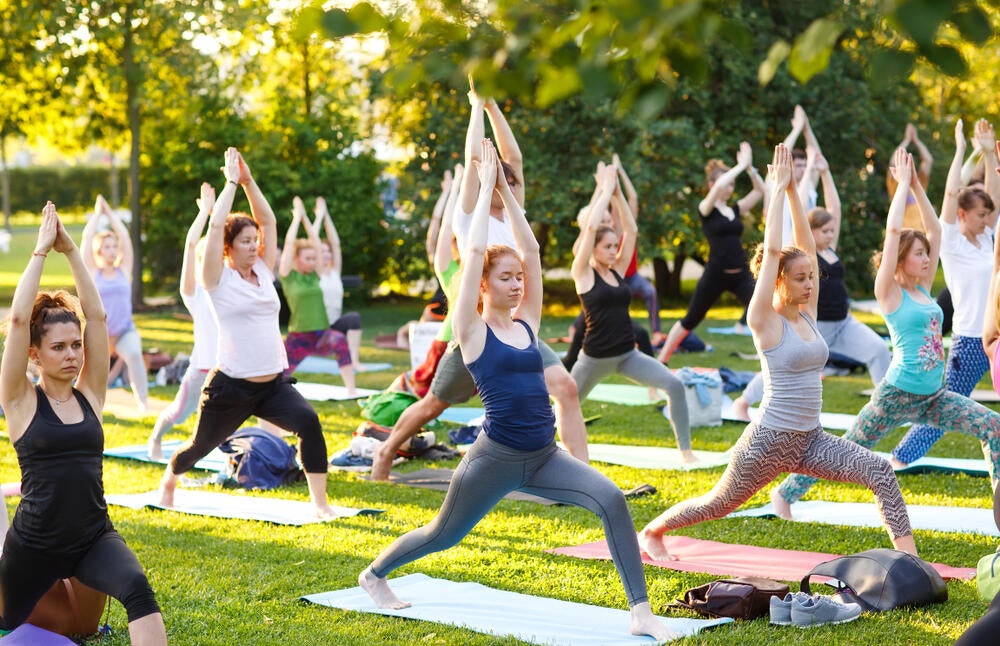 In a quiet alley off the noisy main street in Beirut’s Gemmayzeh neighborhood, past a quiet walled courtyard with shady trees and a gurgling fountain, a tucked-away door leads into an airy yoga space. Inside the studio, called Sarvam, students intone a cacophony of chants as the practice wraps up: The Sanskrit word “om” three times, followed by a sequence of the word “shanti” (peace).In recent years, an increasing number of students have come seeking relief amid the hustle and bustle of modern life. Hala Okeili, Sarvam’s founder, estimated that the number of people practicing yoga in Beirut had “easily tripled” over the past three years.

And although the growth in yoga’s popularity shows no signs of slowing, several instructors told The Daily Star that its mainstreaming still faced obstacles among people who fear that some parts of the practice – ritual chants, for instance – may be an affront to religious tradition.

Okeili herself picked up the practice after, she said, burning out as a high-power corporate lawyer in Saudi Arabia.

“I was super stressed out with my work. I had a lot of responsibilities and used to spend a lot of time behind my laptop,” she said.

Stress and back pains led her to yoga, which she said changed her entire outlook. “Yoga became my solace,” she said.

Soon she returned to her native Lebanon, and three years ago she started Sarvam from scratch.

At the time, she said, the yoga scene in Beirut looked very different from today. Beirut had only a handful of studios, and each could host no more than 12 or so students.

“When I opened the studio, I realized that people had a lot of fear,” Okeili said. “It was a strange environment for them.”

In her first year as an instructor, she said she would receive lots of calls from concerned patrons that the mantras and “oms” recited in class were Hindu prayers.

Other yoga teachers in Beirut recalled a similar sentiment surrounding the practice at the time. “A few years ago, there would always be this conversation that yoga is against religion,” said Dunia Atmeh, an instructor at Isha Yoga in Beirut’s Badaro neighborhood.

Such concerns were expressed not just on an individual level. In 2017, the Lebanese Episcopal Commission for Social Communication released a statement advising that “the spirituality of yoga is … incompatible with Christian faith.”

Marwan Khoury, a Maronite cleric, has described yoga as “a distinctly Satanic practice.”

But Okeili said that while concerned calls still came in, they had been abating in recent years. “People look at [yoga] more and more as an exercise, and they don’t care about the rest,” she said.

Now, her studio alone regularly hosts classes with 20 to 40 students, as often as four or five times a day, and similarly large-scale operations have been opening all over the city. Yoga has also spread beyond the studios into regular gyms, where many people are exposed to it totally divorced from the spiritual aspect.

That was exactly what got Nesrine Hammoud interested in the practice a year ago. After having two caesarean sections, the 44-year-old mother of two said she worried about her health a lot. “I was afraid of my body,” she said. She turned to yoga to get back into shape, and has been delighted by the results.

“Many people told me this is something bad,” she said, citing specifically objections based on religious reasons.

But for Hammoud, yoga has nothing to do with her spirituality, and is instead a great way to calm down and get some exercise.

“People in our 40s, we are the war generation,” she said.

“We have a lot of stress in our lives. We need yoga.”

Even as the religious aspect becomes less of an obstacle than it used to be, Okeili pointed out that some barriers still exist.

For one, the idea persists that yoga is “only for women” – men are much slower than women to take to the mat to pick up the practice.

She also said the idea of being somewhere at 7 a.m. “does not exist in the Lebanese mindset,” and getting people to come to early morning classes remained a challenge.

But these challenges appear unlikely to stunt yoga’s fast-growing popularity in Lebanon.

With free events and yoga festivals drawing crowds of up to 400 people and studios of all sizes sprouting up around Beirut, local instructors said they were confident about the practice’s future in the country.

“People are open to this more and more,” Atmeh said.

“And in coming years it’s going to be more. That’s what I can sense.”