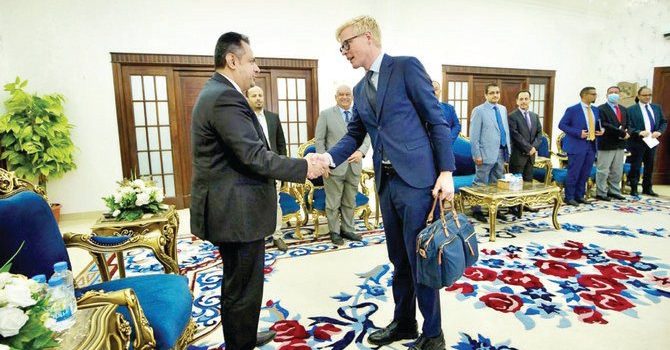 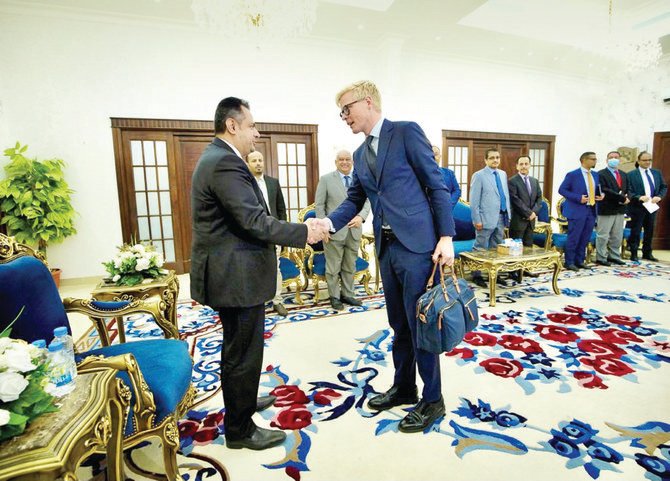 AL-MUKALLA: Yemen will enjoy peace and stability only when the Iran-backed Houthi militia stops undermining the country’s security and blackmailing the world, Yemen’s prime minister said on Tuesday.

At a meeting in Aden with new UN Yemen special envoy Hans Grundberg, Maeen Abdul Malik Saeed said the Houthis were not serious about making peace in Yemen and had moved ahead with their deadly strikes against civilians.

“Peace will not be achieved in Yemen as long as Iran insists on its aggressive blackmail against the world through its sabotage tools represented by the Houthi militia,” the prime minister said.

He also criticized the international community for not putting enough pressure on the Houthis to accept peace efforts and stop shelling residential areas, as the world did when the Yemeni government was close to seizing control of Hodeidah in 2018.

“Yemenis always compare international stands on Hodeidah with Marib. In Hodeidah, the international movement was collective and the pressures were great. But in Marib, we only see individual statements. This makes Yemenis lose confidence in the peace path,” he said.

During his visit to Aden, the UN Yemen envoy will discuss peace efforts to end the war with the Yemeni parties. His office said he welcomed the return of the prime minister to Aden and discussed with him the implementation of the Riyadh Agreement and other political developments.

Grundberg also met the leader of the separatist Southern Transitional Council, Aidarous Al-Zubaidi, and is expected to meet leaders of the main political and social forces in southern Yemen.

Hours before touching down in Aden, Grundberg urged the Yemeni parties to fully commit to achieving peace in Yemen and end the war.

“Ending the conflict and reaching a comprehensive and inclusive political solution that meets the aspirations of Yemenis should be the primary and urgent objective of all relevant actors. It is a shared responsibility that requires everyone’s full commitment to peace efforts,” Grundberg said.