AFP /Dubai Yemeni rebels yesterday called for the full withdrawal of the Saudi-led military coalition after the UAE, a key part of that coalition,... 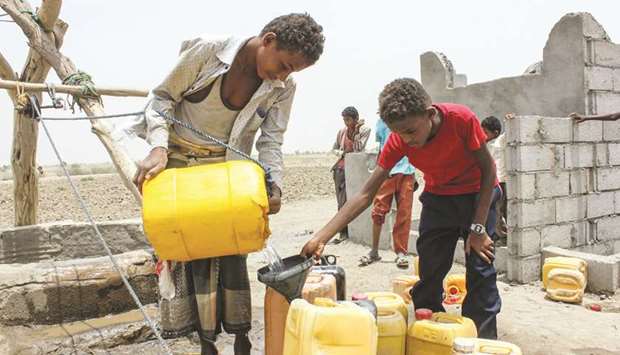 Yemeni rebels yesterday called for the full withdrawal of the Saudi-led military coalition after the UAE, a key part of that coalition, said it had begun reducing its deployment.
“We call on the aggressors to withdraw from Yemen, as the Republic of Yemen rejects aggression, siege and air embargo,” tweeted Mohamed Ali al-Huthi, head of the rebels’ Higher Revolutionary Committee and an influential political figure.
“Withdrawing from Yemen is the ideal decision that must be taken at this time,” he added.
The coalition intervened in Yemen in March 2015 to back the internationally-recognised government against the Houthi rebels, but the UAE announced on Monday that it was redeploying and reducing its troop presence in the country.
“We do have troop levels that are down for reasons that are strategic in (the Red Sea port city of) Hodeidah and reasons that are tactical” in other parts of the country, a senior UAE official, who requested anonymity, told reporters.
“It is very much to do with moving from what I would call a military-first strategy to a peace-first strategy, and this is I think what we are doing.”
The official however reiterated UAE’s commitment to the Yemeni government and the Saudi-led coalition, saying Abu Dhabi discussed redeployment with its Saudi partner “extensively”. Yemen’s rebels — who have faced persistent coalition bombing since March 2015 that has exacted a heavy civilian death toll — have stepped up missile and drone attacks across the Saudi border in recent weeks.
At least one person has been killed and 56 wounded in Saudi Arabia in three such Houthi attacks since June 12, according to Saudi authorities.
Meanwhile, a court run by Yemen’s Houthi rebels yesterday sentenced 30 academics, trade unionists and preachers to death for allegedly spying for the Saudi-led coalition, a judicial source said.
The men, among 36 defendants tried by the criminal court in the rebel-held capital Sanaa, have been in custody for at least the past year, the source said.
“The criminal court today (Tuesday) issued a verdict condemning 30 people to death on charges of spying for the aggression countries,” the source said, adding that the other six were acquitted.
He said the men were convicted of supplying the coalition with information on locations for air strikes.
Amnesty International condemned the verdicts, saying they had targeted “political opposition figures” in “sham trials”.
Among those condemned to death was Yussef al-Bawab, a 45-year-old father of five and linguistics professor, who had been “arbitrarily arrested in late 2016”, it said in a statement.
“Since the Houthi de facto authorities assumed control of the justice system in 2015, they have progressively utilised the Sanaa-based SCC (Specialised Criminal Court) to target persons they deem to be opponents or even just critics,” said Lynn Maalouf, Amnesty’s Middle East research director.