AFP /Hodeidah Representatives from Yemen’s government and Houthi rebels tasked with pulling forces out of the key port city of Hodeidah met yesterday for... 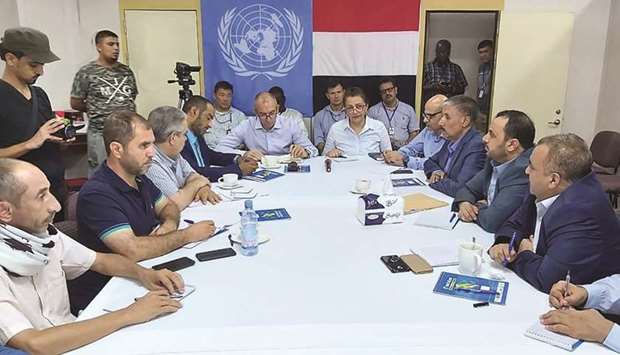 Representatives from Yemen’s government and Houthi rebels tasked with pulling forces out of the key port city of Hodeidah met yesterday for the first time in five months.
The redeployment from Hodeidah is a critical part of a ceasefire deal reached in December in Sweden that calls on the government and the Houthis to move forces away from ports and parts of city.
“The joint meeting of the redeployment coordination (committee) meeting started earlier this afternoon,” a UN official present at the meeting told AFP, adding it was set to continue today.
The last meeting was held on February 16-17, the source added.
The UN head of the committee confirmed the meeting “aboard a UN vessel on the high seas”, adding it would centre on “steps to implement” the Hodeidah pullback plan.
Led by Danish General Michael Lollesgaard, the committee established under the Sweden agreement includes representatives from the United Nations, the Yemen government and Houthi rebels.
The pullback was supposed to have taken place two weeks after the ceasefire went into force on December 18, but that deadline was missed.
In May, the UN announced the rebels had withdrawn from Hodeidah and two other nearby ports, the first practical step on the ground since the ceasefire deal.
But the government accused the militia of faking the pullout, saying it had merely handed control to its allies.
Lollesgaard confirmed in June there had been no Houthi military presence in all three ports since their withdrawal a month before.
The UN is hoping that a de-escalation in Hodeidah will allow desperately-needed food and medical aid to reach millions in need in Yemen.
The Red Sea port is the entry point for the bulk of imported goods and relief aid to Yemen, which the United Nations has described as the world’s worst humanitarian crisis.
The Yemen conflict has killed tens of thousands of people since the Saudi-led military coalition intervened in support of the beleaguered government in March 2015, according to the World Health Organisation.
The fighting has also displaced millions and left 24.1mn — more than two-thirds of the population — in need of aid.