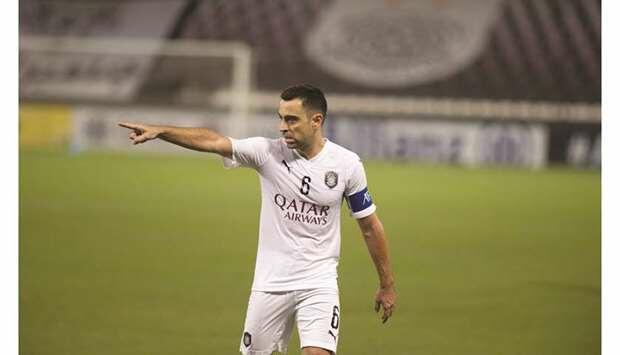 Al Sadd captain Xavi Hernandez will be hoping for a perfect end to his illustrious footballing career today, when he leads his team out in the Amir Cup final against Al Duhail at the newly-built Al Wakrah Stadium.

While there will be a lot of attention towards the opening of the new World Cup venue, Xavi’s focus will be on bidding farewell by winning another title with Al Sadd. Ahead of his retirement, Xavi spoke to club’s official website, where he shared his experiences in Qatar over the past four years. Excerpts

Q: How do you rate your experience with Al Sadd during the past four years?
I rate my time here in Qatar very highly. It was one of the best decisions of my life to come here. My family and I, we are very comfortable here.

My children are like Qatari because they were born here. We are very happy and grateful to live here. Everyone offers us respect.

I want to thank my big family at Al Sadd, all my friends on the team, the management, the staff – everyone worked hard and they ensured that I was very happy throughout these last four years. Once again, I am happy to have come here and as I said, it is one of the best decisions of my life.

Q: What are your final goals before retiring?
We are delighted to reach the final of the Amir Cup. We will try to end the season in the best way possible by winning the title. It will be the ideal ending to the season, in the presence of His Highness the Amir and playing at the Al Wakrah Stadium, one of the venues of the World Cup. As the captain of the team, I hope I get the honour of lifting the trophy. This is one of the most important tournaments in Qatar and we want to grab this great opportunity.

We will play a Duhail team that has a number of good players. It will be a tough game, but we have trained hard during this past week and I am very excited for the opportunity to win the last title of my life as a footballer at one of the 2022 World Cup pitches. We want to put smiles on the faces of our fans because they certainly deserve it.

Q: At the end of your career with Al Sadd, which is the title you wanted to win the most?
I won all the domestic titles here, the league, Amir Cup, Qatar Cup and the Sheikh Jassim Cup. I wanted to win the AFC Champions League. We had an excellent team and we were the better side in the semi-final against Persepolis but this is football. All the titles I won with Sadd are important but I hoped to win the Champions League title as well, and we were close to doing it.

Q: Who will be Xavi’s successor in football?
I don’t like comparisons in football. There are many excellent midfielders today, some of them are superstars, such as Busquets, Modric, Kroos and Verratti. Many others are there as well, but I don’t really like comparisons and I don’t want to miss out on any name. I think there will be better players than me, because football is like life, there is always renewal.

Q: What will your final message be and to whom?
My final message is to say thanks to everyone. My time as a player was great, ever since I was a child. I did not expect to reach this level in my career. I played at Barcelona and Al Sadd, and I achieved all my dreams with them.

I want to thank Qatar, Al Sadd Club and everyone in Qatar. You will always be in my heart.