MAJURO, MARSHALL ISLANDS (AFP) – Pacific islands that were key World War II battlegrounds but largely neglected for the past 30 years are now... 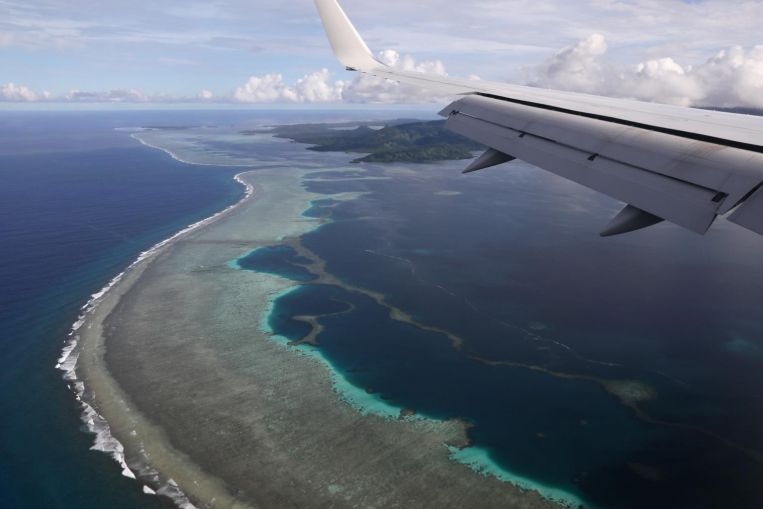 MAJURO, MARSHALL ISLANDS (AFP) – Pacific islands that were key World War II battlegrounds but largely neglected for the past 30 years are now back in the spotlight as China challenges traditional US supremacy in the region.

Palau, the Federated States of Micronesia and the Marshall Islands, whose territories stretch thousands of kilometres across the Pacific, have been the recipients of largesse by Washington, Tokyo and other allied powers, but otherwise mostly ignored in recent decades.

However, increasing competition between China and the US has dramatically altered the landscape, elevating the island nations beyond even their Cold War visibility when they were the site of strategic outposts and 1950s atom bomb tests.

In recent years Washington’s attention was focused elsewhere and US funding grants to the three nations were slated to end in 2023.

China was quick to spot the opportunity to woo new diplomatic allies and look for strategic advantage in the vast region, analysts said.

“Reductions in development assistance, and redirections as to where that assistance is given have created a vacuum which China has been able to fill, particularly in addressing stated needs of Pacific island countries in relation to infrastructure,” said Pacific politics specialist Tess Newton Cain, a visiting fellow at the Australian National University.

Washington and its allies have only recently woken up to the challenge, with US Secretary of State Mike Pompeo and Japan’s Foreign Minister Taro Kono making unprecedented visits to the region, taking their cheque books with them.

“Recognition of the strategic value of the three north Pacific nations has re-emerged given the tensions between China and the United States and its allies,” said Mr David Hanlon, a retired University of Hawaii professor of Pacific Islands, Micronesia and ethnographic history.

“The recent increase in Chinese commercial activity, diplomatic initiatives, territorial disputes, and expansionist ambitions – real or imagined – in the larger Asia-Pacific region have challenged the notion of the Pacific as an American lake.”

In a sign that Washington is looking to re-engage with the region, Mr Pompeo announced the start of negotiations with the three island nations to extend the US funding grants due to end in 2023.

Japan’s Mr Kono has also unveiled multi-million dollar support for a hospital ship, disaster management centres, a new water reservoir for the Marshalls along with fisheries and maritime enforcement support.

Japan wants to “increase support to countries in the region for a free and open Indo-Pacific,” Mr Kono said as he wrapped up a four-nation swing that also took in Fiji.

Mr Pompeo’s funding announcement came two weeks after China deposited US$2 million (S$2.77 million) into Micronesia’s trust fund – a fund the US had said only the previous week was unlikely to produce sufficient interest to maintain the Micronesian government’s financial stability.

Palau, the Federated States of Micronesia and the Marshall Islands have treaties with Washington known as Compacts of Free Association.

The soon-expiring funding agreements under these treaties were established to capitalise trust funds in an effort to wean the islands off direct US federal funding after decades of largesse from Washington.

Mr Pompeo however confirmed the United States would not allow a financial opening for China in the US-affiliated islands.

“We want to help nations of the Indo-Pacific to continue their decades’ long rise and maintain their sovereignty both in the political and economic spheres,” he said as he announced discussions to extend the US funding beyond its long-planned end in 2023.

Tokyo’s pledge of increased aid to the Pacific also reflects the fact “this region is gaining importance more than ever”, said Mr Naoaki Kamoshida, an assistant press secretary for Japan’s foreign ministry.

And Japan would work with any country that “shares our values and vision”.

The US move to extend funding “indicates the leverage that diplomatic tensions have provided the three Pacific states”, Mr Hanlon said.

And Ms Cain said it was evident Washington wanted to reassert itself with the three states with support from key allies.

“Part of the rhetoric around this is to stress that the US and Japan, along with Taiwan, Australia, and New Zealand, are democratic countries who share key values with the countries of the Pacific,” she said.