Working with Pedro Martinez, Tyler Thornburg ready to prove himself to Red Sox 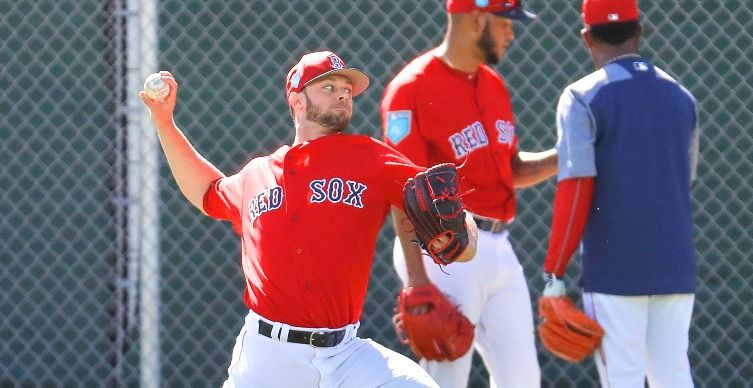 FORT MYERS, Fla.  – The Red Sox are banking on their internal bullpen options to step up and get the job done in 2019. That means without Craig Kimbrel and Joe Kelly shoring up the back end of the ‘pen, opportunity knocks for guys such as Tyler Thornburg.

It’s been a long road back to normalcy for the right-hander. Thornburg missed all of the 2017 season with thoracic outlet syndrome and simply wasn’t the player Boston traded for when he returned in 2018. He’s happy to be starting the spring off with a clean slate.

“Being like a regular player is actually really fun,” Thornburg told reporters at JetBlue Park. “You know, it’s nice not being in the whole rehab stage, having to hold back in certain areas, and come to the park every day and you know, enjoy it. Not worrying about the two or three hours I have to do to make my arm good enough to throw. It just makes it a lot more fun, honestly.”

Thornburg was dominant in 2016 with the Brewers, when he was last 100-percent healthy. That season, he posted a 2.15 ERA and 0.94 WHIP while earning 13 saves. He’s spent the offseason working on being able to prove this year that he still has that same kind of stuff.

“Obviously it’s not just the fans [to prove it to],” he continued. “It’s the players, the coaches, the front office people that yeah, they know what I can do, they’ve given me the opportunity, things like that. So yeah, definitely looking forward to actually showing people how I can actually pitch.”

Thornburg certainly is getting the proper guidance in order to get him back to his 2016 self. He talked about what it’s been like to have the great Pedro Martinez giving him tips.

“Weird. It’s one of those things where you kind of just want to hand him the ball,” Thornburg joked. “No I mean it’s really cool.

“The guy obviously did incredible things while he was playing, so any time he opens his mouth, you really want to listen. So, I mean he gave me really good pointers when I was on the mound yesterday. Definitely some things that, you know, I want to think about going forward, all that good stuff. It’s awesome just to have him there, and have him give you some ideas on things.”

But no matter how many pointers Thornburg gets from Martinez, the real key to bouncing back will be patience.

“Yeah, I feel like maybe a couple years into being in the big leagues I kind of had to learn that [patience],” Thornburg said. “That you always have your ups and downs regardless, but especially these last couple years. I think if I hadn’t started being that way early on, the last few years would have been even tougher. But I’m really looking forward to this year after all the downs.”

Red Sox president of baseball operations Dave Dombrowski mentioned Thornburg’s name when talking about closer candidates for this season. Is that on Thornburg’s mind this spring?

Click here to download the new MyTeams App by NBC Sports! Receive comprehensive coverage of your teams and stream the Celtics easily on your device.