With Israel in Limbo, Benny Gantz Vows to Seek a ‘Peace Within’ 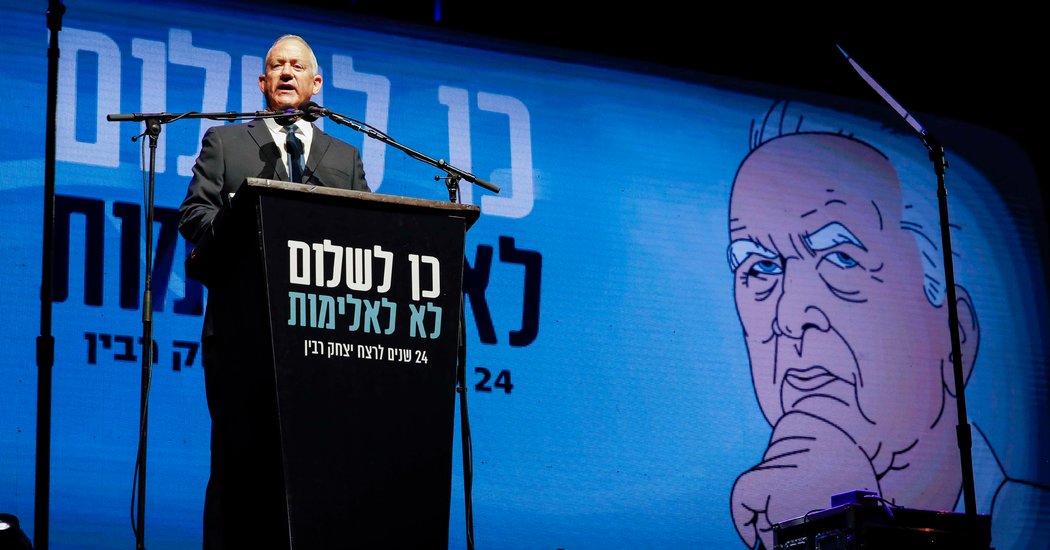 Benny Gantz, the former army chief whose party narrowly defeated that of Prime Minister Benjamin Netanyahu, is trying to form a government and drive Mr. Netanyahu from office for the first time in a decade. The prime minister, clinging to power, hopes Mr. Gantz will fail, forcing a third election that few in Israel want.

Nothing important can get done until the country resolves the question of who will lead it. And weighty decisions about Israel’s future await — on national security, with rockets from Gaza landing in the South and tensions with Hezbollah cranking up in the North; on how religious the Jewish state should be and who should be exempt from serving in its army; and on how to address other problems, including teeming hospitals, overcrowded classrooms and gridlocked highways.

But in some ways, Israel also seems stuck in the past.

On Saturday, around 25,000 people flocked to a central plaza facing Tel Aviv City Hall to remember Yitzhak Rabin, the prime minister who sought to make peace with the Palestinians and who was assassinated by a Jewish extremist who believed he was justly executing a traitor.

The annual event functions partly as a somber reunion for what remains of the Israeli left. It is held on the same square, now named for Mr. Rabin, where he was gunned down in 1995 after addressing a huge and adoring crowd in support of the Oslo Accords, the first formal agreements between Israel and the Palestine Liberation Organization.

Throughout the night, parents brought their children to the precise spot behind City Hall where Mr. Rabin was shot. Perhaps the most impressive of several markers there is in the form of dislodged stones, as if the ground had erupted and was frozen in the act of consuming him.

On Rabin Square, Peace Now had a kiosk, while Israel’s communists had a booth, and banners that had seen better days called for an end to the occupation. T-shirt-wearing adherents from different leftist groups buttonholed one another and everyone else, hoping for new recruits to the cause.

The speeches each year recall Mr. Rabin’s drive for peace and give lip service, at least, to the goal of a future settlement.

But there was a distinct focus on something else this time. In a tent erected by the Labor Party, an exhibit showed the slogans and images that right-wing opponents of the peace process had used to whip up anger against Mr. Rabin. One depicted him in a Gestapo uniform. Another dressed him as Yasir Arafat.

A third doctored a famous photograph of Mr. Rabin reaching to shake the hand of Mr. Arafat, the leader of the P.L.O., at the White House, to make it look as if Mr. Rabin were handing Mr. Arafat an M-16 rifle.

Others showed the leader of the right-wing opposition at the time, at the forefront of the crowds of protesters against Mr. Rabin: a much younger Benjamin Netanyahu.

A film now in theaters, “Incitement,” which is Israel’s candidate for a foreign-language Academy Award, retells the story of Mr. Rabin’s assassination from the point of view of the gunman, Yigal Amir. It portrays him not as a madman, but as a rational actor convinced that he was doing the right thing under Jewish law.

The film also shows the carnage of Palestinian suicide bombings that made many Israelis turn against the Oslo process. And it shows the gunman consulting several right-wing rabbis about whether Mr. Rabin deserved to die, none of them bluntly declaring that to kill him would be wrong.

The director, Yaron Zilberman, said in an interview that his film was a cautionary tale, relevant to today’s Israel.

Snir Berkovitch, 49, was at Saturday’s rally, as he is every November, with his daughters and their mother, formerly his wife. They had driven from near Haifa, an hour up the coast.

“I was here the night he was murdered,” Mr. Berkovitch said. “I think the situation in Israel today is pretty much the same. People who are against peace are trying to scare us all the time, against the Arabs, that we can lose the state. You need strong leadership, like Yitzhak Rabin. Hopefully, Benny Gantz can be that strong.”

A few steps away, Guy Moses, 29, and Asaf Shiri, 30, stood watching the speeches and songs. “The last 10 years there hasn’t been as much hope as there is today,” said Mr. Moses, a music producer.

Mr. Shiri, who works in finance, said people were impatient to replace Mr. Netanyahu, largely because of how much he had been inciting Israelis to vilify one another.

“Most of the anger toward the current government, it’s not about policy,” he said. “It’s about how in the last few years, if you talk about peace in Israel, they mark you as a traitor — you’re against the country. And if anyone on the other side’s a human being, or you understand that it’s complex, then you’re a traitor because you understand there are human beings on the other side.”

During both of this year’s election campaigns, Mr. Netanyahu has explicitly played on anti-Arab fears. After a bit of a hiatus, he reverted to form on Thursday, after Mr. Gantz released a photograph of himself sitting down for coalition talks with the leaders of the predominantly Arab Joint List, Ayman Odeh and Ahmad Tibi.

On Twitter, Mr. Netanyahu twinned the Gantz photograph with a picture of himself surrounded by Israeli soldiers. “Interesting what each of them did today,” he wrote.

Still, Mr. Gantz, a centrist from the new Blue and White party who is aligned with the much smaller left, is in the driver’s seat for now, even if the road ahead looks treacherous. He at least has some options, even if none is fail-safe or ideal.

And even a third election appears unlikely to end in an improved result for Mr. Netanyahu. The trend line is negative for his Likud party, and polls also suggest that many voters would blame him for pushing the country to a third ballot.

Mr. Gantz, a former army chief of staff, as was Mr. Rabin, has subtly reached for the assassinated leader’s mantle since first becoming a candidate for prime minister early this year. But it’s a measure of how much public discourse and expectations have changed in a quarter-century that merely uttering the word “peace” qualifies as reaching for Mr. Rabin’s mantle.

With the spotlight on him on Saturday night as he spoke at the memorial, Mr. Gantz focused on a different kind of peace process — not with the Palestinians, which seems hopelessly far off — but among Israelis, before anyone burns what few bridges remain between left and right.

“Partisanship has turned us into strangers,” Mr. Gantz said. “And hatred has once again become a dangerous weapon for politicians who know no boundaries.”

He did not mention Mr. Netanyahu’s name. It was not necessary.

But Mr. Gantz also said that no one, and no party, held a monopoly on incitement. There were leftists who “mock and criticize those who worship the graves of sages,” just as there were those at the other end of the spectrum who praise the perpetrators of attacks on Palestinians or “revere the heinous murderers of children,” he said.

“It is the duty of leaders from the left, center and right to put an end to those whose mouths cannot stop on their own and whose words nourish the flight of the bullets which will be used in the next murder,” Mr. Gantz added.

He vowed that, if he does become prime minister, he will return to Rabin Square in November 2020, this time alongside the leader of the opposition, whoever that might be, and “express a message of hope and internal reconciliation.”

“We are setting out on the most important fight,” he said, “the fight for peace within.”