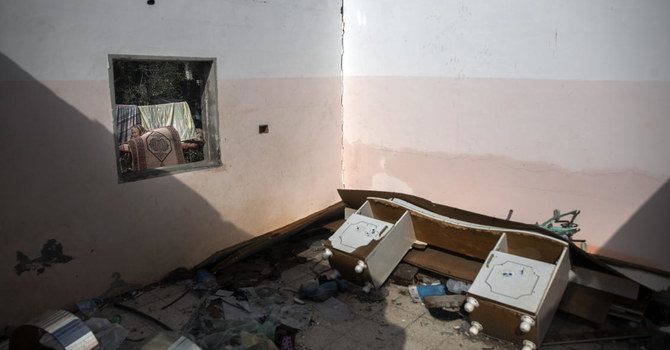 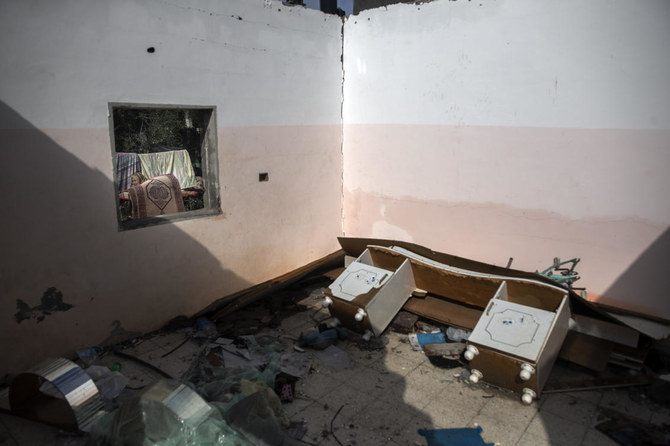 BEIT LAHIYA, Gaza Strip: The first rainstorm of winter sent water pouring into Ghalia Al-Attar’s house through cracks in the walls and tin roof, as the widow, her children and grandchildren spread buckets across the floor.

Their home was among tens of thousands that were damaged during the 11-day Gaza war in May between Israel and the Palestinian militant group Hamas, which rules the isolated and impoverished territory. Hundreds of homes were completely destroyed, and reconstruction efforts have yet to get off the ground.
Families like the Al-Attar’s have patched things up as best they can, but winter in the seaside territory brings chilly nights and periodic rainstorms.

“I have never seen a night worse than that,” Al-Attar said the next day, as she and her relatives spread blankets and mattresses on ropes to dry.

The farming town of Beit Lahiya, near the frontier with Israel, was hit by Israeli airstrikes during the war. Several surrounding homes were damaged, and trees were gashed by shrapnel.

Israel says it only took aim at military targets and made every effort to spare civilians, but of the more than 250 people killed in Gaza, more than half were civilians, according to the UN Thirteen people were killed on the Israeli side.

According to the United Nations, some 56,000 homes across Gaza were damaged in the conflict, and over 2,100 others were either completely destroyed or damaged so heavily they are uninhabitable. Israel launched hundreds of airstrikes during the war, often into populated areas where it said Hamas was staging attacks, as Gaza militants fired thousands of rockets at Israel.

Gaza has endured four wars and a punishing Israeli-Egyptian blockade since 2007, when Hamas seized power from rival Palestinian forces. Israel says the blockade is needed to keep the militants from rearming, while critics view it as a form of collective punishment.
Naji Sarhan, an official with the Hamas-run Housing Ministry, says residents need $170 million to rebuild, but so far only $13 million has been disbursed. That’s covered some repairs, but the funds aren’t deemed sufficient to cover the rebuilding of homes that were destroyed. The World Bank, which helps coordinate international aid to Gaza, has provided similar estimates on what is needed to rebuild.
“Donor countries are tired,” Sarhan said. “There are houses that were destroyed three times. In each war, this or that house is destroyed, then rebuilt, then destroyed.”

Many families whose homes suffered only minor or moderate damage have remained in them, often because they cannot afford other lodging. But after months without repairs, and with the arrival of rainy weather, the cracks are widening.

Qatar, which is the main donor to Gaza and a political ally of Hamas, has allocated $50 million for rebuilding and repairing homes. Egypt has pledged $500 million for infrastructure and housing, but it’s unclear how much of that funding has materialized. Sarhan said Hamas officials are in talks with Qatar to increase its contribution.
Israel has eased the blockade as part of an informal cease-fire brokered by Egypt and is issuing 10,000 permits for Palestinians in Gaza to work in Israel, mainly in construction and menial labor. That will provide a vital influx of cash to Gaza, where unemployment hovers around 50 percent. Building materials are allowed in for those who can afford them.

The morning after the rainstorm, some homes in Beit Lahiya were still flooded. Ali Al-Attar, a cousin who married and moved into his own place in January, waded through foot-deep (30-centimeters) water as he carried his furniture out and moved it into his parents’ house. He tried to salvage wet carpets that stank from the brackish water.
“We hope to rebuild this house and make it good, but I cannot,” Ghalia said.