What will Turkey do next? This is the question every party in Syria is pondering as they try to peer into the inner workings... 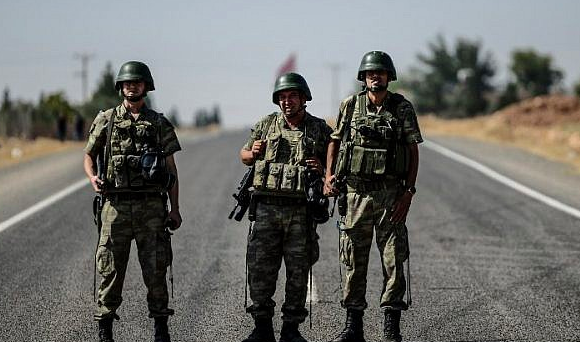 What will Turkey do next? This is the question every party in Syria is pondering as they try to peer into the inner workings of President Recep Tayyip Erdogan’s mind. Will Turkish armed forces venture further into their neighboring country and invade northeast Syria, as the Turkish President routinely threatens?

Only last month, the Turkish military presence on the border was beefed up. As yet, however, Turkey, wary of upsetting Washington, has not invaded because of the presence of US forces.

Let us not forget Turkish forces have already invaded Syria multiple times. The media typically ignores the areas under an overt Turkish occupation that began back three years ago. How often have you heard politicians refer to the need to end the Turkish occupation of northern Syria?

Turkey’s demands are clear: It wants a safe zone in northern Syria free from armed Kurdish groups, principally the People’s Protection Forces (YPG), which is the core component of the Syrian Defense Forces (SDF), numbering about 60,000 fighters. Turkey fears a Kurdish state or entity under the control of YPG, which it views as part of the Kurdistan Workers’ Party (PKK), and a terrorist group.

Turkey’s whole approach has increasingly shifted from one of opposition to the Syrian regime, which lasted from 2011 to 2015, back to its traditional anti-Kurdish policy. This is why Turkey’s Syrian opposition allies in Idlib fear that Ankara might sacrifice Idlib in favor of the northeast.

Hostility to Syrian Kurds was most noticeable in Operation Olive Branch, a Turkish military operation in Afrin. Turkish troops and their proxy Syrian forces were accused of widespread looting and destruction of Kurdish property, which was a worrying precedent for Syrian Kurds elsewhere.

If Turkey invades further, how will the Kurdish-dominated Syrian Defense Forces (SDF) react? Will its forces be recalled, for example, from other areas in the Euphrates Valley, such as Deir Ezzor, leaving people there exposed to attacks by Daesh or the Syrian regime? Many are fearful of this scenario.

Turkey wants to establish a safe zone that it controls and operates. The YPG wants an international zone in which Turkish forces are absent. The Syrian regime wants all territory restored. The US and Russia, who are the most influential external actors, face tough choices as to who to disappoint.

Turkey is trying to pile on the pressure by warning that it will not permit the establishment of a safe zone to be delayed by talks with the US. The differences between Ankara and Washington are far from insignificant, despite the signing of a vague deal last week that included plans to set up a joint operations center to oversee any safe zone “as soon as possible.”

These are not two allies working in lockstep. The US backs the SDF, which Turkey considers a terrorist group. Turkey wants a 32 km-deep, 460 km-long safe zone, which would extend more than twice as far into Syrian territory as the US would like. Turkey demands overall control of the zone. The US has proposed moving YPG heavy weapons out of the zone but this is not enough for Ankara.

Concerns are growing about Turkish plans to re-engineer the demography of northeast Syria. The fear is that Turkey is serious in its plans to relocate 700,000 Syrian Arab refugees to Kurdish areas in an attempt to change the ethnic make-up of the region.

A complicating factor is that Daesh is far from defeated, despite US boasts to the contrary. Its fighters are dispersed across Syria and Iraq and its chains of command reconstituted. It especially threatens Arab dominated areas under SDF control. Instability only increases the chance of a reinvigorated insurgency by Daesh this year.

What is far from clear is how this scenario will affect the thinking in Ankara. Turkish forces could be exposed to Daesh attacks in a way that currently they are not. Erdogan will certainly not want the US to ramp up its support for the SDF. Meanwhile, prior experience is not likely to give the US military much confidence about Turkish intentions regarding Daesh, as for years Turkey turned a blind eye to Islamist fighters crossing its borders into Syria. Many believe Turkey still fears the Kurds more than Daesh.

Turkey’s strategy has to be understood in the context of a variety of factors, not least the ever-changing, flip-flopping position of the US. Some in the US administration want to leave Syria, while some want to work with the SDF to keep the Syrian regime and Iran at bay, especially from oil-rich zones. Others back some sort of arrangement with the Syrian regime as an option. Trust in Turkish intentions, according to a US administration insider, is “not high.”

US President Donald Trump on Dec. 19, 2018, announced that all 2,000 US troops in Syria would be withdrawn. In a telephone conversation with Erdogan, he reportedly said: “You know what? It’s yours. I’m leaving.” Frenetic internal lobbying within the administration in Washington over the following two months led to an agreement that a 200 strong force would remain in the northeast. Turkey has not been impressed by what it sees as stalling by the administration in Washington.

The US military presence is insurance against a winner-takes-all onslaught in the region involving Turkey, the Syrian regime, Kurdish groups and Daesh remnants. US forces have acted as a buffer, thwarting the ambitions of both the Turks and the Syrian regime. However, all of them are aware that the US might not stay the course, especially with Trump occupying the White House.

Chris Doyle is director of the London-based Council for Arab-British Understanding.