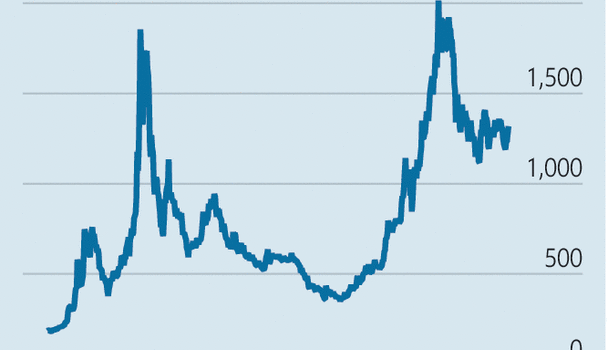 When trouble strikes, where should you hide? The case for gold

Print edition | Finance and economics Feb 16th 2019 IMAGINE YOU have an assignation in New York. You have not been told where you...

IMAGINE YOU have an assignation in New York. You have not been told where you should meet the other person and she has not been told where to meet you. You have no understanding of where to find her or where she might usually be found. She is as ignorant of you. You cannot communicate. You must somehow guess how to find each other and make those guesses coincide. Where should you go? And at what time of day?

A good answer is Grand Central Station at noon. That was the response of the majority asked by Thomas Schelling, a game theorist and Nobel prizewinner in economics, in experiments reported “The Strategy of Conflict”, published in 1960. People are often able to act tacitly in concert if they know that others are trying to do the same, said Schelling. Most situations throw up a clue, a “focal point”, around which to co-ordinate, even if it takes imagination as much as logic to find it.

Now imagine the world economy goes into a tailspin. There is panic selling of risky assets. Where should you seek safety? Cash is the most liquid asset; but which kind? The dollar is a natural focal point. Yet America’s fiscal indiscipline and its sizeable current-account deficit might give pause. Other currencies have their faults, too. There is one other destination you might consider, if only because others are starting to think the same way. And that is gold.

A lot of people respond to this suggestion by backing away gently while claiming an urgent appointment elsewhere. Gold keeps some strange company. Ardent gold bugs seem to know a lot about firearms, the best places with access to fresh water and the best ways to preserve food. And what, after all, are its merits? It is supposed to be an inflation hedge. Yet there is not much of that to hedge against. Inflation barely threatens the standard rich-world target of 2%. And after gaining $100 an ounce recently, gold is hardly cheap by past standards, in inflation-adjusted terms (see chart). 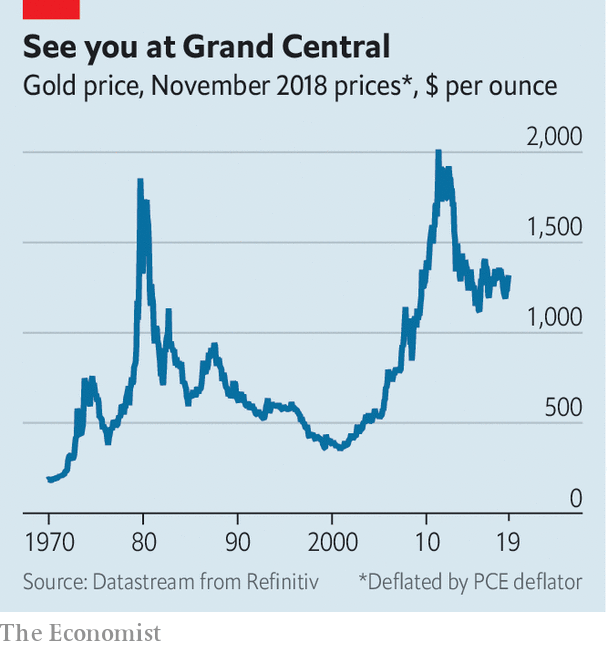 Consider the alternatives, though. The euro is flawed. It has no unique sovereign issuer to stand behind it. And the yuan is not a currency you can trade easily. The yen, admittedly, is a good bolthole. Japan’s net foreign assets—what Japan’s residents own abroad minus what they owe to foreigners—are worth $3trn, or 60% of annual GDP. In a crisis, some of that capital comes home, pushing up the yen. Those seeking safety follow suit. The Swiss franc has similar appeal. Still, there is a downside. Past form suggests both countries are likely to cap a rise in their currencies by printing more of them. Short-term interest rates have been negative for years in Japan, Switzerland and the euro area, in part to deter currency strength. By contrast gold’s yield—zero—seems almost racy.

And the dollar? As a global currency it has no peers. During the last big crisis, in 2008, the dollar rallied. There had been lots of global borrowing in greenbacks. So when trouble struck, there was a scramble for dollar liquidity. The world still has a large short position on the dollar, in that there has been heavy borrowing in the currency beyond America’s shores. Yet the world is also long dollar assets. America’s listed firms make up the bulk of global stockmarket indices. Its government-bond market has swollen to 100% of GDP. And the dollar still accounts for the bulk of official reserves.

Tellingly, the managers of those rainy-day funds seem a mite concerned that they are crammed into the same spot. The share of dollars in the $10.7trn of reserves reported to the IMF has dropped from over 65% when Donald Trump was elected president to below 62% in the latest figures. This may in part be a response to growing political risks. The dollar’s central role in global trade and finance allows America to impose financial sanctions to great effect. It has been doing so with greater frequency, so Russia, for instance, has drastically cut the dollar share of its reserves, to 22%, while raising the shares of euros and yuan. Russia has been a big buyer of gold, too. In that, it is not alone. Net purchases of gold by central banks rose by 74% last year to the highest since 1971, the year the dollar’s peg to the gold price broke.

Now, as then, there are growing concerns that the dollar is a crowded trade. It is as if there are so many people in Grand Central Station that it is impossible to find the person you’re supposed to meet there—or if you do find them, you cannot fight your way out without mishap. It is why gold is starting to appeal again as a spot to converge upon. You would have to mix with some strange people there. But can you really say that you would never visit?