What to know about vitamin K-2

Vitamin K is an essential vitamin that supports blood clotting and healthy bones. It occurs in two forms, K-1 and K-2. Vitamin K-1 is...

Vitamin K-1 is the primary form, and it mainly comes from leafy green vegetables. Vitamin K-2 occurs in animal proteins and fermented foods. The bacteria in the human gut also produce small quantities of K-2.

In this article, we discuss vitamin K-2, its functions, and how it differs from K-1. We also describe dietary sources, health benefits, the recommended daily intake, deficiency symptoms, and supplements. 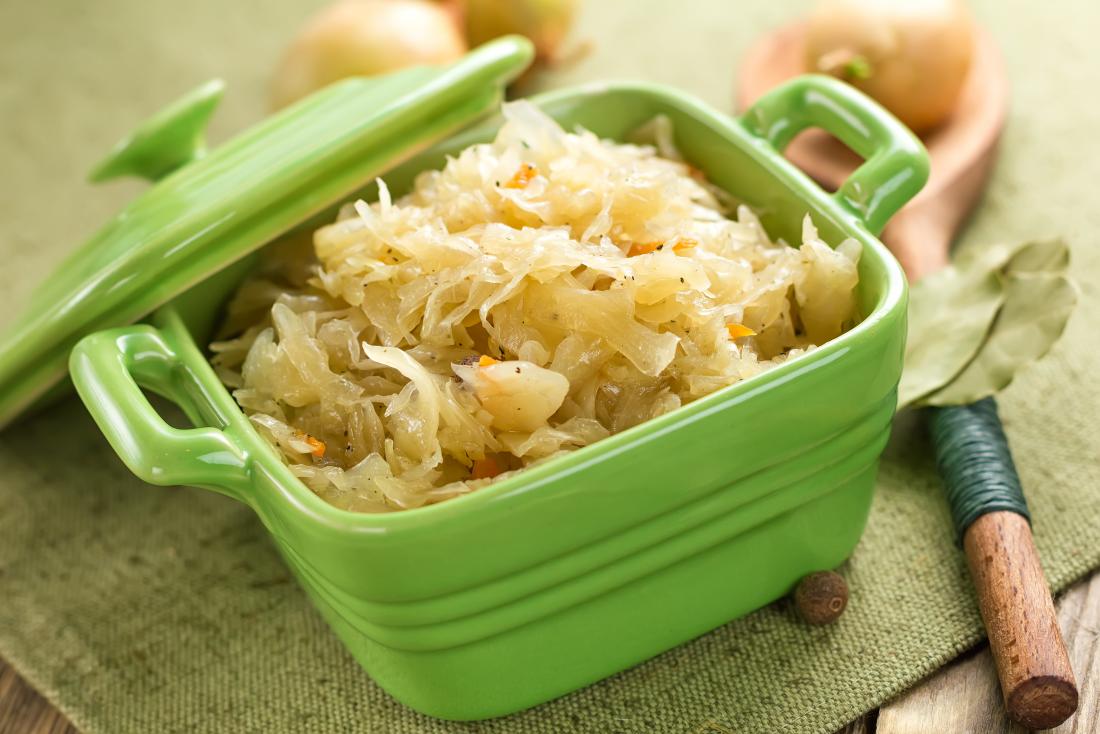 Sauerkraut is a good dietary source of vitamin K-2.

Vitamin K refers to a family of fat-soluble vitamins that the body needs to produce a protein called prothrombin, which promotes blood clotting and regulates bone metabolism.

Vitamin K-1 is primarily involved in blood coagulation. K-2 may have a more diverse range of functions in the body.

In a long-term study involving 36,629 participants, researchers observed an association

between high intakes of vitamin K-2 and a reduced risk of developing peripheral arterial disease (PAD), particularly in people with high blood pressure. However, the authors concluded that K-1 had no effect on PAD risk.

Vitamin K has antioxidant properties. It protects cellular membranes from damage due to excess free radicals, in a process known as peroxidation. Blood thinning medication, such as warfarin, can lower the antioxidative potential of vitamin K.

Vitamins K-1 and K-2 have different chemical structures. Both types have a phytyl side chain, but K-2 also has isoprenoid side chains.

K-2 has several subtypes, called menaquinones (MKs), which scientists have numbered MK-4 through MK-13, based on the length of their side chains.

K-1 is the primary form of the vitamin, and it is mainly present in leafy green vegetables. However, the body has difficulty absorbing vitamin K-1 from plants.

According to a 2019 review, research suggests that the body absorbs 10 times more vitamin K-2, in the form of MK-7, than vitamin K-1.

Vitamin K is fat-soluble, so eating dietary fats, such as butter or plant oils, may enhance the body’s absorption of vitamin K-1 from plants.

The body stores vitamins K-1 and K-2 differently. K-1 accumulates in the liver, heart, and pancreas. K-2 occurs in high concentrations in the brain and kidneys. 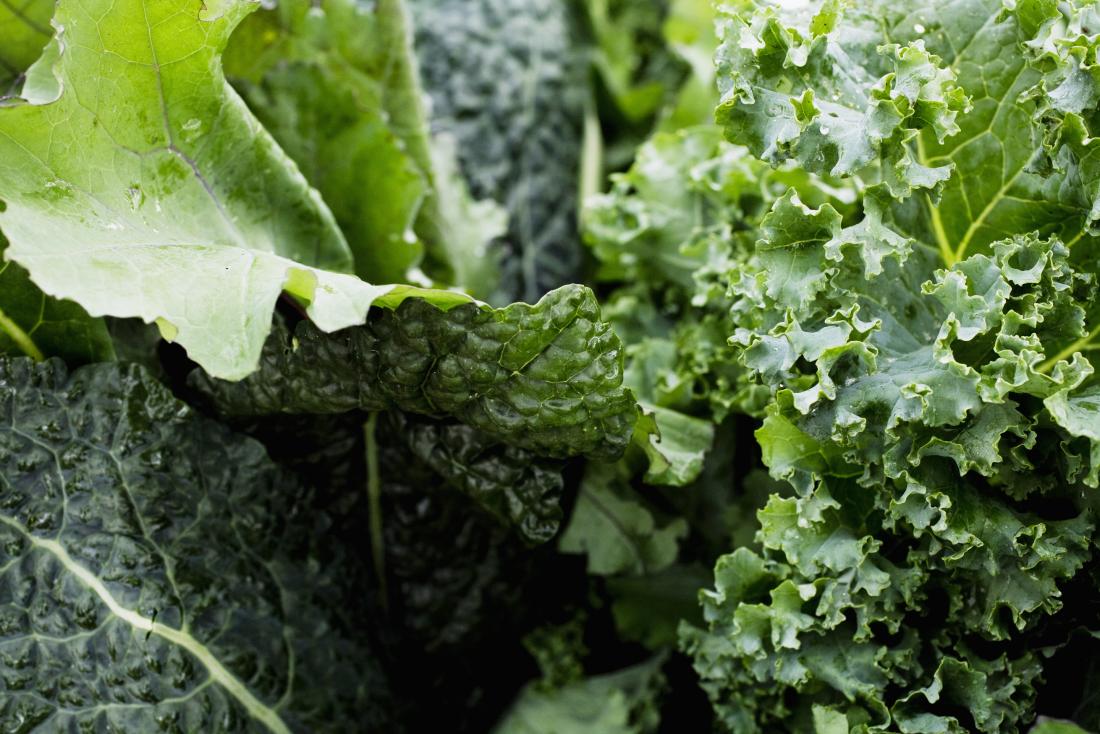 Several foods are rich in vitamin K-1, and vitamin K-2 is much less common. Bacteria in the gut can convert some K-1 into K-2.

Fermented foods are a good source of vitamin K-2.

Also, because it is fat-soluble, organ meats and high-fat dairy products contain fairly substantial quantities of vitamin K-2. Conversely, lean meats, such as poultry, are not good sources of K-2.

Dietary sources of vitamin K-1 include:

Dietary sources of vitamin K-2 include:

In addition to its crucial role in blood clotting and wound healing, vitamin K-2 has a number of other health benefits. We discuss some of these below.

According to a 2015 review article, K-2 activates a protein that prevents calcium deposits from forming in the walls of blood vessels. The author cited findings suggesting that a diet high in natural vitamin K2 may decrease the risk of coronary heart disease.

A 2019 study investigated the effects of taking MK-4 supplements in 29 postmenopausal females who had experienced hip or vertebral compression fractures.

The researchers concluded that taking 5 milligrams of an MK-4 supplement daily reduced the levels of undercarboxylated osteocalcin to that “typical of healthy, premenopausal women.”

A 2016 study investigated the effects of vitamin K-2 in rats with metabolic syndrome, high blood glucose levels and symptoms of anxiety, depression, and memory deficit.

After 10 weeks, treatment with vitamin K had normalized blood glucose and reduced symptoms of anxiety and depression. However, it did not improve memory deficit in the rats.

Vitamin K-2 has antioxidant properties that may help protect against cancer. In addition, findings suggest that K-2 may suppress genetic processes that lead to tumor growth.

According to a 2018 study, vitamin K-2 that scientists had modified with a sialic acid-cholesterol conjugate significantly suppressed tumor growth in mouse cells.

The Office of Dietary Supplements (ODS) recommend a daily intake of 120 micrograms (mcg) of vitamin K for adult males and 90 mcg for adult females. There is no specific recommendation for vitamin K-2.

A severe deficiency increases the time it takes for the blood to clot, making a person more prone to bruising and bleeding and increasing the risk of hemorrhage.

A deficiency of the vitamin can also reduce bone mineralization, which can lead to osteoporosis.

Certain medications can affect vitamin K levels in the body. For example, long courses of antibiotics can kill the gut bacteria that produce vitamin K. Some cholesterol-lowering medications can also interfere with the body’s ability to absorb vitamin K.

Blood thinners, such as warfarin, can interact dangerously with the vitamin. It is important for people taking these medications to consume the same amount of dietary vitamin K each day and to speak to a doctor before taking supplements or making dietary changes. 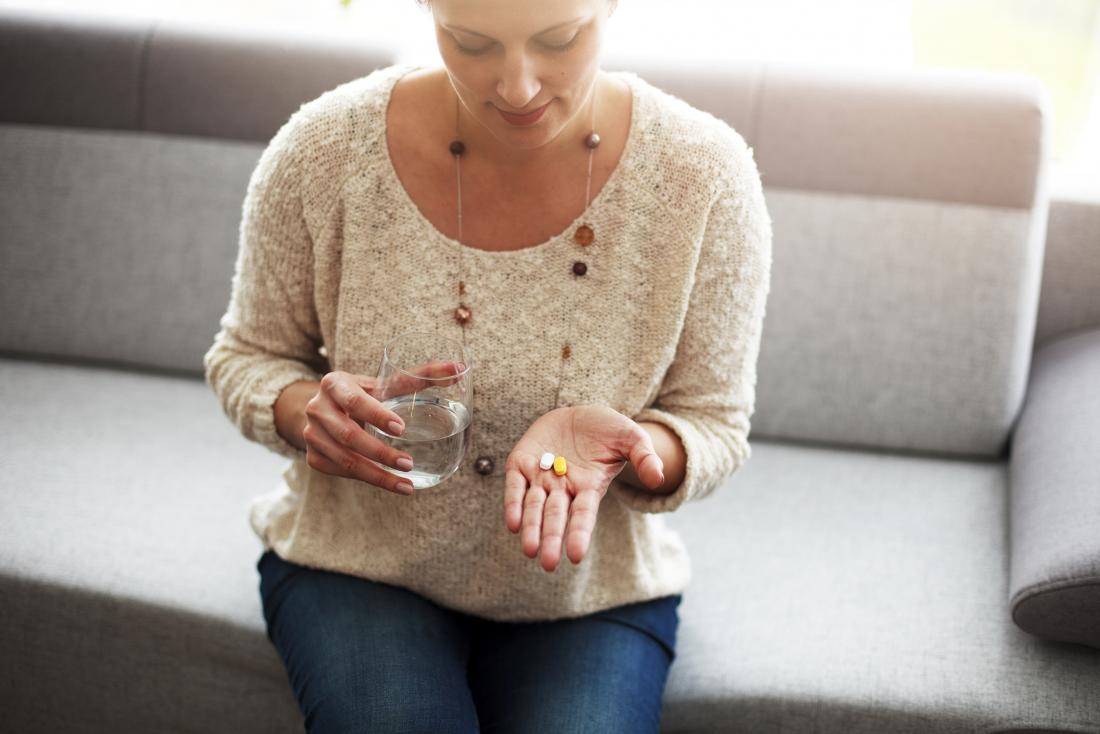 While the ODS report that vitamin K deficiency is very rare and that most people are getting enough of the vitamin from their diet, anyone at risk of a deficiency may wish to consider dietary supplements.

Many multivitamins contain both forms of vitamin K. A person can also purchase vitamin K as a standalone supplement or in combination with specific nutrients, such as vitamin D, calcium, or magnesium.

The types of vitamin K commonly available in dietary supplements include:

The concentrations of K-1 and K-2 vary, depending on the supplement. Always check the nutrition label before purchasing supplements.

Vitamin K can interact with some drugs, especially blood thinners, so it is important for people taking prescription medications to speak to their doctor before using a dietary supplement.

A variety of vitamin K supplements are available to purchase online.

There are two main forms of vitamin K: vitamin K-1 and vitamin K-2.

K-1 primarily occurs in leafy green vegetables, and it is the main dietary source of vitamin K. However, the body absorbs K-2 more readily, particularly the K-2 subtype MK-7.

Good sources of vitamin K-2 include fermented foods, organ meats, and dairy products. Fermented soybeans, such as natto, are an especially rich source of vitamin K-2. Bacteria that live in the human gut also produce small quantities of K-2.

Both forms of vitamin K are essential for blood clotting and bone health. However, vitamin K-2 may also protect against certain forms of cancer and heart disease.

Vitamin K deficiency is very rare and most people get enough of this vitamin from their diet. Some gastrointestinal conditions can increase the risk of a deficiency. However, people with these conditions should speak to their doctor before taking a dietary supplement.