What does the color of period blood mean?

The color of a person’s period blood can relay vital health information. For example, orange or grey blood can sometimes indicate a vaginal infection....

During menstruation, the body sheds tissue and blood from the uterus through the vagina. This bloody discharge can vary from bright red to dark brown or black depending on how old it is.

Blood that stays in the uterus long enough will react with oxygen (oxidize). Blood that has had time to oxidize appears darker.

Hormonal changes and health conditions can also affect the color and texture of period blood.

In this article, we present a period blood chart and discuss what the different colors of period blood can mean. We also cover color changes during a period, what clots mean, and when to see a doctor. 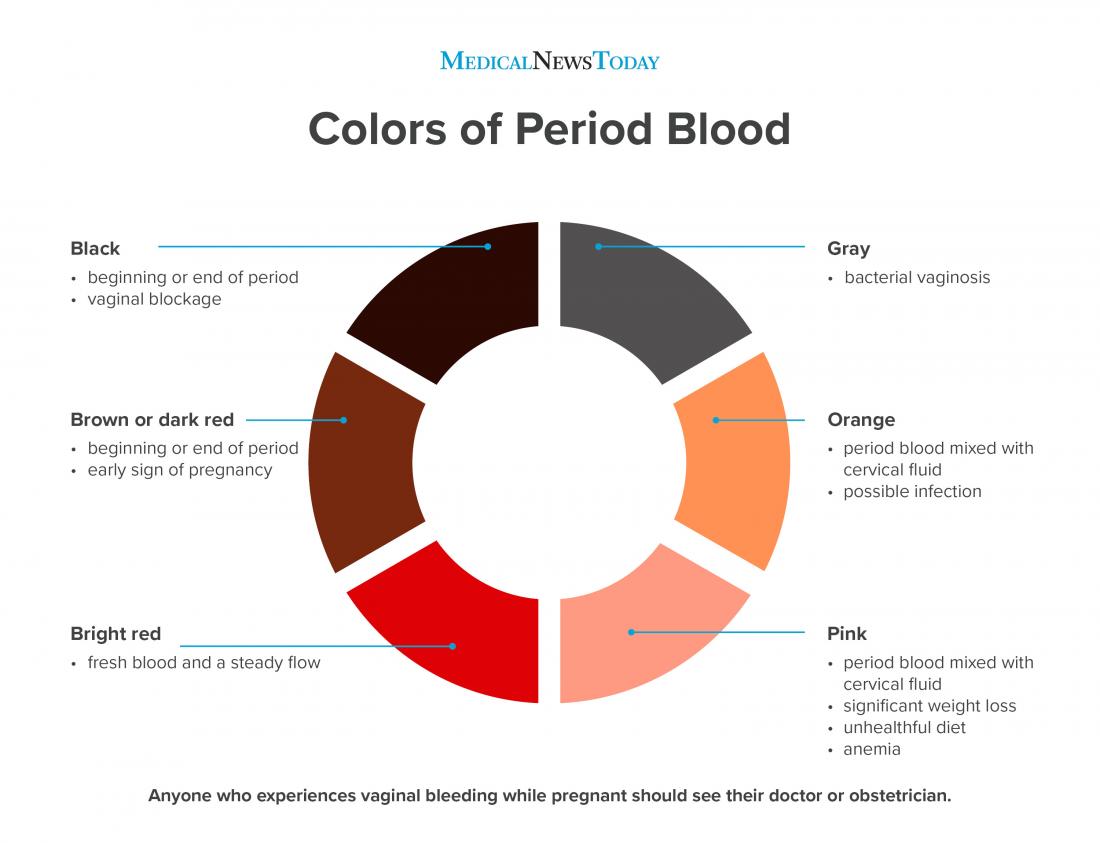 Black blood can appear at the beginning or end of a person’s period. The color is typically a sign of old blood or blood that has taken longer to leave the uterus and has had time to oxidize, first turning brown or dark red and then eventually becoming black.

Black blood can sometimes also indicate a blockage inside a person’s vagina. Other symptoms of a vaginal blockage can include:

Brown blood or spotting can sometimes also be an early sign of pregnancy that doctors refer to as implantation bleeding.

Brown discharge or spotting during pregnancy can indicate a miscarriage or an ectopic pregnancy, which is when the fertilized egg implants in a fallopian tube instead of the uterus.

It is important for women who experience spotting or vaginal bleeding during pregnancy to speak to their doctor or obstetrician.

Dark red or brown vaginal discharge that occurs after giving birth is called lochia, or postpartum bleeding. Lochia is not a cause for concern and is the body’s way of expelling excess blood and tissue from the uterus.

Lochia typically begins with bright red blood and then transitions to a darker shade as the flow decreases. Over time, the discharge will then become lighter in both color and amount.

The duration of lochia varies from person to person, but it usually passes within the first few months after delivery. Women who experience very heavy bleeding after giving birth should see a doctor.

Bright red blood indicates fresh blood and a steady flow. A period may start with bright red bleeding and darken towards the end of the period. Some people may find that their blood stays bright red throughout their period.

Unusual spotting or bleeding between menstrual cycles may be a sign of a sexually transmitted infection, such as chlamydia or gonorrhea. Growths in the uterine lining, called polyps or fibroids, can also cause unusually heavy bleeding.

Pink blood or spotting can occur when period blood mixes with cervical fluid.

Using hormonal birth control can lower estrogen levels in the body, which can lead to a lighter flow with a pinkish hue during periods.

Sexual intercourse can create small tears in the vagina or the cervix. Blood from these tears can mix with vaginal fluids and exit a person’s body as pink discharge.

Other causes of pink period blood can include:

During pregnancy, pink discharge that contains tissue and occurs alongside cramps may indicate a miscarriage. It is important for women who experience vaginal bleeding while pregnant to see their doctor or obstetrician.

Blood that mixes with cervical fluid can also appear orange.

Orange blood or discharge often indicates an infection, such as bacterial vaginosis or trichomoniasis. People with orange blood should check for other telltale symptoms, such as vaginal itching, discomfort, and foul-smelling discharge.

Although orange period blood or discharge does not always indicate an infection, it is a good idea for a person to see a doctor or gynecologist for an evaluation.

Gray discharge is usually a sign of bacterial vaginosis, a condition that occurs due to an imbalance between beneficial and harmful bacteria in the vagina.

Other symptoms of bacterial vaginosis include:

During the later stages of pregnancy, gray discharge containing clots can indicate a miscarriage. Women who experience bleeding during pregnancy should see their doctor or obstetrician.

Color change during a period

Blood can change in color and texture from month to month or even during a single period.

Hormonal changes, as well as a person’s diet, lifestyle, age, and environment, can all cause variations in period blood.

Period blood can vary from bright red to dark brown according to changes in flow. Infections, pregnancy, and, in rare cases, cervical cancer, can cause unusual blood color or irregular bleeding.

People who experience unusually long or heavy periods may require an appointment with a doctor. 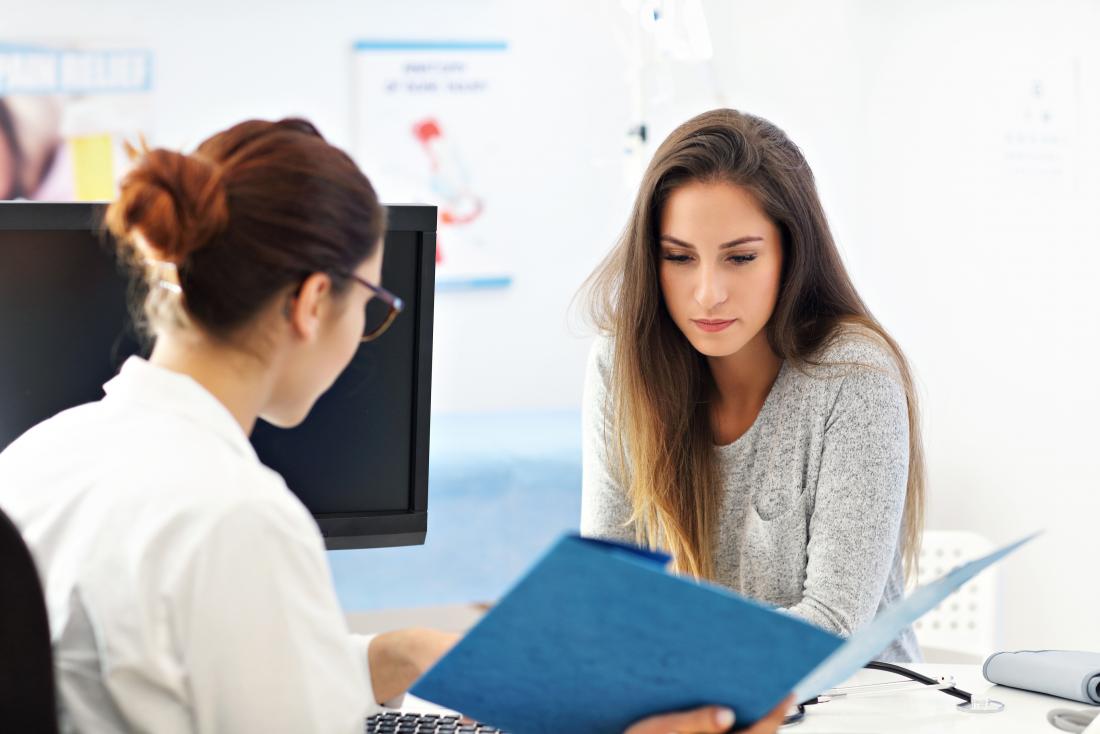 A person should see a doctor if they have bleeding that requires a tampon or pad change after less than 2 hours.

Healthy period blood can contain visible pieces of the uterine lining. These small pieces of tissue, or clots, in the blood are not a cause for concern.

However, very heavy bleeding or large clots can be a sign of menorrhagia. According to the Centers for Disease Control and Prevention (CDC), menorrhagia is when a person has unusually heavy menstrual bleeding or periods that last for more than 7 days.

The CDC recommend seeing a doctor if a person has one of the following:

The CDC also list the following as causes of menorrhagia:

Without treatment, menorrhagia can lead to complications, such as anemia or chronic fatigue.

It is advisable for people to consult a doctor or gynecologist for any of the following symptoms:

Anyone who is pregnant and notices any bleeding or unusual vaginal discharge should speak with their doctor or obstetrician.

The color and consistency of period blood can provide useful information about a person’s overall health.

However, everyone’s period is different, and blood can change color and consistency during a period and from month to month. So it essential for people to learn what is normal for them.

Healthy period blood typically varies from bright red to dark brown or black. Blood or discharge that is orange or grey may indicate an infection. Women who experience bleeding during pregnancy should see a doctor or obstetrician for an evaluation.