Warriors clinch top seed in West with win over Clippers 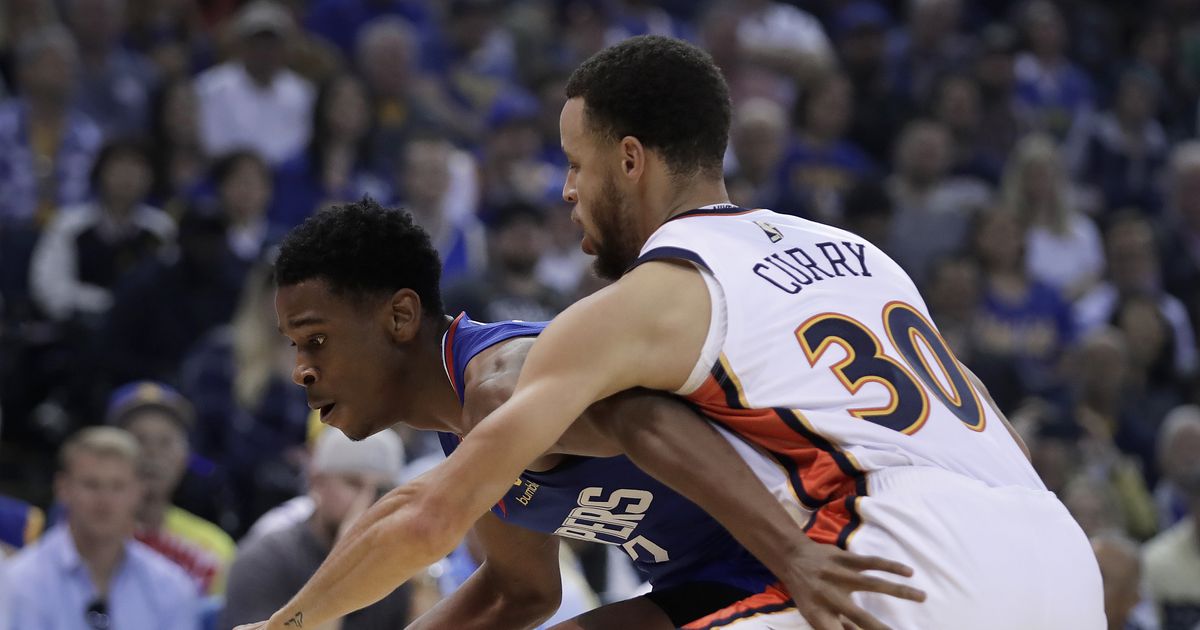 OAKLAND, Calif. (AP) — Soaking in the franchise’s nostalgia of yesteryear, Stephen Curry scored 27 points and helped the Golden State Warriors clinch the Western Conference’s top seed with a win in their final regular-season game at Oracle Arena, beating the Los Angeles Clippers 131-104 on Sunday night for a fifth straight victory.

Kevin Durant added 16 points and seven assists, making six of seven field goals, as the Warriors players opted to honor the past by sporting throwback white “We Believe” jerseys worn during the 2007 playoff run that snapped a 12-year postseason drought.

A banner commemorating 47 years at Oracle was unveiled afterward and it will move across the bay to hang inside new Chase Center in San Francisco where the Warriors will play next season.

“Let me just say that for 47 years, Warriors fans have stuck with us through thick and thin,” coach Steve Kerr told fans moments after the final buzzer, also thanking the arena staff. “Let’s be honest, most of those years have been a little thin.”

Landry Shamet scored 17 points with five 3-pointers for a Clippers team still missing Patrick Beverley because of a right hip pointer. Los Angeles dropped into a seventh-place tie with San Antonio in the Western Conference by losing its third straight. Now, the Clippers play the Jazz in the regular-season finale Wednesday and with various scenarios very well could be returning to Oracle next weekend for Game 1 in the first round of the playoffs.

Even with the playoffs around the corner, this was a night of celebrating the end of a nearly five-decade run in the arena.

“Are they not going to make the playoffs?” Clippers coach Doc Rivers quipped. “I hope they don’t make it. That would be phenomenal. I’m just saying, it would be.”

The Warriors beat the Clippers for the 16th time in the last 18 matchups and 15th in 17 at home.

Golden State made 10 of its first 13 shots — Durant hitting his initial four and Curry starting 3 for 3. Curry wound up just 3 for 10 from deep.

“Since it’s not really the last game here, I know it’s a ceremonial final game, I didn’t get too sentimental or emotional or anything because hopefully we will be coming back here and playing a lot more games in the next couple months,” Kerr said. “I’ll probably hold off onto the emotion until it actually happens.”

Kerr narrated an appreciation video to fans and the arena on a night old favorites such as Sleepy Floyd, Rick Barry, Adonal Foyle and Marreese Speights were on hand for the festivities.

The Oakland Symphony performed at halftime as more highlights played.

Clippers: Rivers would like to play the Warriors in the playoffs, just not in the first round. “If you want to win, you’ve got to play somebody at some point. We’re not dodging,” Rivers said. “I just want to be healthy and playing great in the playoffs. Do we want to play the Warriors in the playoffs? Yes. Do we want to do it in the first round? Probably not, but you’ve got to take it when you get it.” … Los Angeles is 0-4 without Beverley, who missed his third straight game. … All five starters reached double figures.

Warriors: A tribute to Al Attles was shown on the big screen during a first-quarter timeout for his selection into the Naismith Basketball Hall of Fame. Attles, a former player, coach, general manager with the Warriors and current ambassador, hasn’t been well enough to attend games this season but received an ovation. … Cousins received his third foul 6:49 before halftime on a debatable charge. … Shaun Livingston, who had been questionable with a bruised left knee, made all four of his shots in 13 minutes. … Every Warriors player scored. … Andre Iguodala sat out with a sore left toe. … Golden State finished 30-11 at home and 19-7 against the Western Conference.

Warriors: At New Orleans on Tuesday to start a back-to-back to conclude the season at Memphis on Wednesday.