The men’s shot put was one of the highest quality events across the athletics programme last season and six of the seven throwers who...

The men’s shot put was one of the highest quality events across the athletics programme last season and six of the seven throwers who surpassed the 22-metre line will be competing in the Doha Diamond League – the first stage of the IAAF Diamond League 2019 – on 3 May. 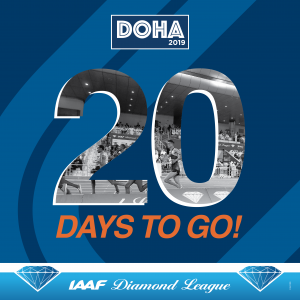 The event came to a climax in the Zurich Diamond League where reigning world indoor and outdoor champion Tom Walsh from New Zealand reached out to a second-round effort of 22.60m to eclipse the Diamond League record by four centimetres.

“Breaking the Diamond League record in Zurich to win the Diamond League title was one of the highlights of my season. Of course, I have very high expectations this year as well and I have been pleased with my performances so far in 2019,” said Walsh.

Walsh holds the world outdoor lead with 21.91m from the Australian Championships where he participated as a guest but the calibre of the field is such that a throw in excess of this mark could be needed to secure victory and maximum points next month.

“I expect a very tough competition in the Khalifa International Stadium on 3 May and I think I will have to throw over 22 metres to take the win,” said Walsh. “I feel ready and I’m sure we will put on another great show for the crowd in Doha.”

His principal rival will be the reigning Olympic champion Ryan Crouser from the United States who threw 22.53m last year. They competed against each other nine times in 2018 with Crouser leading their head-to-head 5-4.

“This will be my first time in Doha and I am excited to throw in the Khalifa International Stadium. My two indoor competitions went very well and I am ready to put out some big throws outdoors,” said Crouser, who threw 22.33m in his first competition of the season at the Millrose Games in New York.

The line-up also features 2017 Diamond League champion Darrell Hill from the United States – who finished second to Walsh in Zurich last year with 22.40m – and Darlan Romani from Brazil who improved his South American record to 22.00m in 2018.

The European challenge is headed by reigning European indoor and outdoor champion Michal Haratyk and world indoor bronze medallist Tomas Stanek who both set national records last season. Haratyk set an outright Polish record of 22.08m while Stanek improved the Czech record to 22.17m during the indoor season.
And adding even more depth to an already illustrious line-up are the two throwers who preceded Walsh as world outdoor champion: 2015 champion

and 2017 silver medallist Joe Kovacs from the United States and 2011 and 2013 champion David Storl from Germany.

“This will be my first international competition of the season and I know it will be another tough battle against a strong group of throwers including Daniel and Christoph who I have competed against many times in the past,” said Gudzius.

“I am also looking forward to making my debut in the Khalifa International Stadium where I will be defending my world title later this season.”

Gudzius defeated Stahl for the world title by just two centimetres in London in 2017. They will be joined by the bronze medallist from that competition Mason Finley from the United States and Olympic silver medallist Piotr Malachowski from Poland.

Bulgaria’s Mirela Demireva ended Mariya Lasitskene’s 45-competition win streak in the Rabat Diamond League last July and the reigning Olympic and European silver medallist will be honing in on the second Diamond League win of her career in the high jump in Doha.

“I was sorry that I could not perform during the indoor season but I am looking forward to testing my shape against a strong group of jumpers at the Khalifa International Stadium,” said Demireva.

The line-up also includes Elena Vallortigara from Italy who fulfilled the promise she showed as a teenager a decade ago by improving her lifetime best from 1.91m to 2.02m last year. Former European indoor champion Airine Palsyte from Lithuania and Ukraine’s Kateryna Tabashnyk, who cleared 1.99m during the indoor season, should also feature as well.

But the established names could be displaced by the precocious Yaroslava Mahuchikh from Ukraine who makes her debut in the Doha Diamond League at the age of 17. Mahuchikh is the reigning world and European U18 champion
and made headlines during the indoor season when she equalled the world indoor U20 record of 1.99m.

Tickets for the Doha Diamond League are available at:
https://www.q-tickets.com/qoc/eventdetails.aspx?k1=nkN8dD2wwvc=