Kfoury, who has been active for more than 25 years and has 17 albums, won Best Arabic Male Singer at the Arab Nation Music... 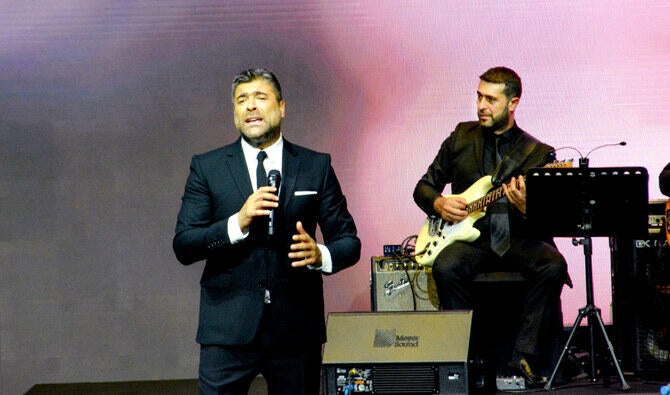 Kfoury, who has been active for more than 25 years and has 17 albums, won Best Arabic Male Singer at the Arab Nation Music Awards in 2017.

He gained popularity in 1996 after releasing the song “Min Habibi Ana,” a duet with Lebanese pop singer Nawal Al-Zoghbi.

The audience was extremely enthusiastic, chanting Kfoury’s name, cheering with excitement and singing along to every song.

Fans said they were very happy to have the Lebanese icon perform in the Kingdom for the first time, and thanked the General Entertainment Authority (GEA) for its efforts to provide high-quality entertainment in Saudi Arabia.

“We’re so happy to have him here. I’m one of his biggest fans. Many thanks to the GEA, which brought us events that we really wanted in Jeddah,” said Dima Rasheed.

Abdullah Qabel said: “We were raised listening to Kfoury’s songs when were younger. We’re very happy to be here and attend his concert in our country. Many thanks to the GEA for making all these events available for us. I look forward to more.”

Ebraheem Moawad said: “It was an amazing experience. I’d like to thank the GEA because I never thought I could see these artists in Saudi Arabia. I always thought I should travel to see them, but seeing them in my country is amazing.”

Mona Abdullah said: “I never thought I’d attend a Kfoury concert in Saudi Arabia. I’d always imagined I had to travel to attend his concerts. I was very excited to attend. Kfoury has been one of my favorite artists since I was 10 years old.”

Lamya Ajaj said: “Kfoury is one of the most significant artists to me, and he has so many fans here. I was so happy he came to Saudi Arabia.

“Jeddah Season’s efforts are unlike anything I’ve ever seen before, from the various exciting shows and organizing, to the professional and helpful volunteers.”