President Trump is carefully weighing a wide range of possible actions against Iran as retaliation for its alleged attack on Saudi oil facilities, it... 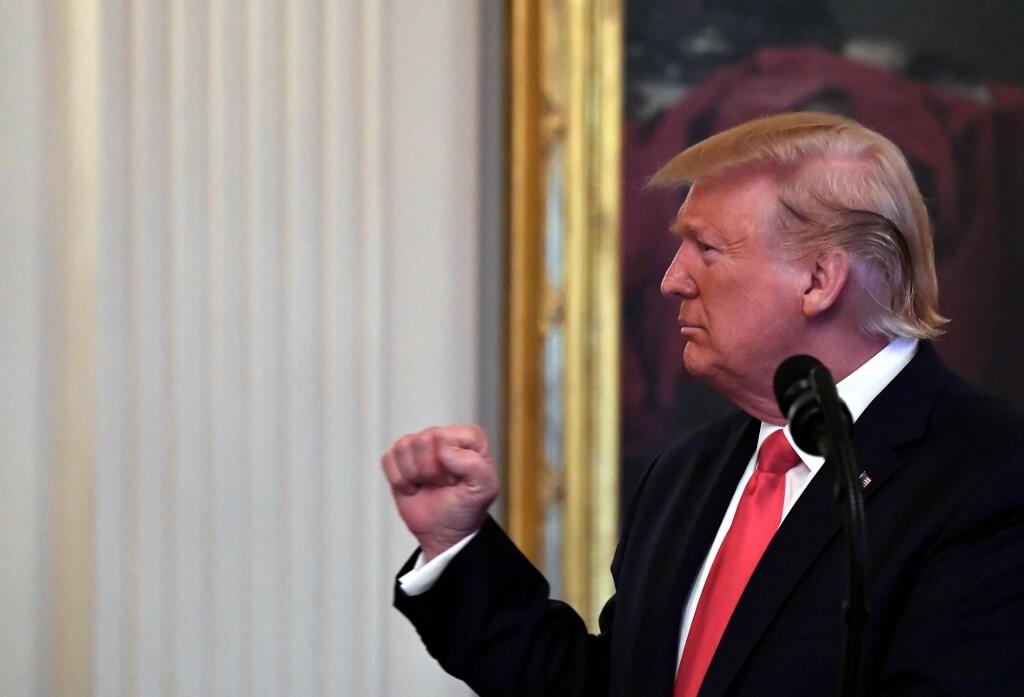 President Trump is carefully weighing a wide range of possible actions against Iran as retaliation for its alleged attack on Saudi oil facilities, it has been reported.

National security officials have reportedly presented the president with a ‘menu’ of options that include military strikes and cyber attacks.

But Trump is said to be leaning toward a ‘narrowly focused response’ that would not entail the United States being sucked into a prolonged military conflict with Iran, NBC News is reporting.

One option being considered by the president and top officials in his administration include background support for a Saudi strike.

This scenario would see the Americans provide intelligence, surveillance capabilities, and targeting information to Saudi forces – though no U.S. personnel would fire weapons at Iran.

These are key sites which are critical to Iran’s ability to process and sell oil.

Since pulling out of the 2015 nuclear agreement, the Trump administration has tightened economic sanctions against Iran.

The Trump administration could also direct the military to strike at sites belonging to the Iranian Revolutionary Guards.

Officials familiar with the planning told NBC News that while no decision has been made, the Pentagon will beef up American troop presence in the Persian Gulf.

Tensions in the region have been high since earlier Tuesday, when American officials laid the blame for the attack on Iran.

Three officials, speaking to Reuters on condition of anonymity, said the attacks involved both cruise missiles and drones, indicating that they involved a higher degree of complexity and sophistication than initially thought.

The officials did not provide evidence or explain what U.S. intelligence they were using for the evaluations. Such intelligence, if shared publicly, could further pressure Washington, Riyadh and others to respond, perhaps even militarily.

Iran denies involvement in the strikes. Iran’s allies in Yemen’s civil war, the Houthi movement, claimed responsibility for the attacks. The Houthis say they struck the plants with drones, some of which were powered by jet engines.

Known for acting on impulse, Trump has adopted an uncharacteristically go-slow approach to whether to hold Iran responsible for attacks on Saudi oil facilities, showing little enthusiasm for confrontation as he seeks re-election next year.

Instead, he wants to wait and see the results of investigations into what happened and is sending Pompeo to consult counterparts in Saudi Arabia and the United Arab Emirates this week.

Trump hinted on Tuesday that he preferred a policy of restraint.

In a Twitter thread, the president’s ally, Senator Lindsey Graham of South Carolina, said that Iran was guilty of an ‘act of war’ by allegedly attacking the Saudi oil fields.

Graham, a Republican who is known to favor aggressive action against Iran, said that the ‘goal should be to restore deterrence against Iranian aggression which has clearly been lost.’

The senator then mentioned the last time there was heightened tensions with Iran – this past June, when a U.S. drone was shot down by Iran’s Islamic Revolutionary Guards above the Strait of Hormuz.

It was widely reported that U.S. fighter jets were in the air ready to retaliate against Iran, but Trump called them back at the last minute.

‘The measured response by President Trump regarding the shooting down of an American drone was clearly seen by the Iranian regime as a sign of weakness,’ Graham tweeted on Tuesday.

But Trump responded to Graham, tweeting: ‘No Lindsey, it was a sign of strength that some people just don’t understand!’

U.S. officials say Trump, who is famously skeptical of his intelligence community, wants to ensure the culprit is positively identified in a way that will pass muster not only with him but with the American people.

‘In responding to the greatest attack on the global oil markets in history, I think not rushing to respond and ensuring everybody is on the same page is where we should be,’ said a U.S. official, who spoke on condition of anonymity.

Trump’s stance today is in stark contrast to 2017, less than three months into his presidency, when he waited only two days before launching air strikes to punish Syrian President Bashar al-Assad’s forces for a chemical weapons attack.

Trump’s caution reflects the America First world view that found support with his base in the 2016 presidential campaign and that he is trying to promote again as he seeks a second term in 2020.

Pillars of that view are that the Iraq war was a waste of blood and treasure, that the end of the war in Afghanistan is long overdue, and that Washington should be reimbursed for deployment of U.S. troops abroad, from South Korea to Germany.

Jon Alterman, a Middle East expert at the Center for Strategic and International Studies and a former State Department official, said Trump also ‘has grown increasingly cautious as the reality of any military actions increased.’

‘There´s a large constituency the president has that thinks it would be lunacy to go to war against Iran,’ he said.

‘There’s a large part of his base that thinks the craziest thing we could do is committing ourselves to endless wars in the Middle East.’

The attacks on Saudi targets have stymied for now what had been an effort to open talks with Iranian leaders to try to get a sense of whether they were ready to strike a deal on their nuclear and ballistic missile programs in response to economic sanctions that have taken a toll on Iran’s economy.

Trump’s willingness to consider easing sanctions on Iran alarmed his national security adviser, John Bolton, when the president raised the idea at a meeting last Monday, a source close to Bolton said.

By the next day, Bolton was out.

A well-known foreign policy hawk, Bolton was said to be furious in June when Trump abruptly called off air strikes in response to Iran’s downing of a U.S. drone.

‘If Bolton were there, he would be saying it was definitely Iran (to blame for the Saudi attack) and we need to strike right now,’ said a former senior administration official.