US Senators to Temporarily Withhold Sanctions on Turkey

Senate Republicans and Democrats hold a news conference about the sanctions bill Washington, DC – Leading US senators who had introduced a...

Washington, DC – Leading US senators who had introduced a bill aimed at imposing sanctions on Turkey over its operation in northeast Syria will temporarily withhold legislative action in order to give diplomatic efforts a chance, Republican Senator Lindsey Graham told Al Jazeera on Tuesday.

After talking to President Donald Trump by telephone at midday Tuesday, Graham said senators would slow the drive in the US Senate to pass economic sanctions against Turkey to “give the administration the space”.

Members of Congress have been angry over Turkey’s offensive in northeast Syria against Kurdish forces.

Turkey launched the assault after Trump ordered US forces to withdraw from the area, prompting sharp criticism from Democrats and Republicans, who accused the president of abandoning the Kurdish-led Syrian Democratic Forces (SDF), one of the US’s main allies in the fight against the Islamic State of Iraq and the Levant (ISIL or ISIS).

Testifying before a US Senate panel on Tuesday, Ambassador James Jeffrey, the US’s special envoy for Syria, described the diplomatic discussions between the US and Turkey.

“We have an agreement with Turkey, that will be as I am speaking, for the YPG forces to withdraw from an area that was controlled by Turkey, that was the term we used, where the Turkish forces have been, essentially central 130 kilometres (81 miles) of this 440-km (273 miles) zone in the north of Syria between the Euphrates and Iraq,” Jeffrey told the Foreign Relations Committee, referring to the People’s Protection Units (YPG), the Kurdish group leading the SDF.

The proposed agreement parallels a deal reached between Turkish President Recep Tayyip Erdogan and Russian President Vladimir Putin after marathon talks in Sochi earlier on Tuesday, Jeffery said. Erdogan and Putin agree to joint Turkish and Russian patrols in a “safe zone” along the border in northeast Syria. 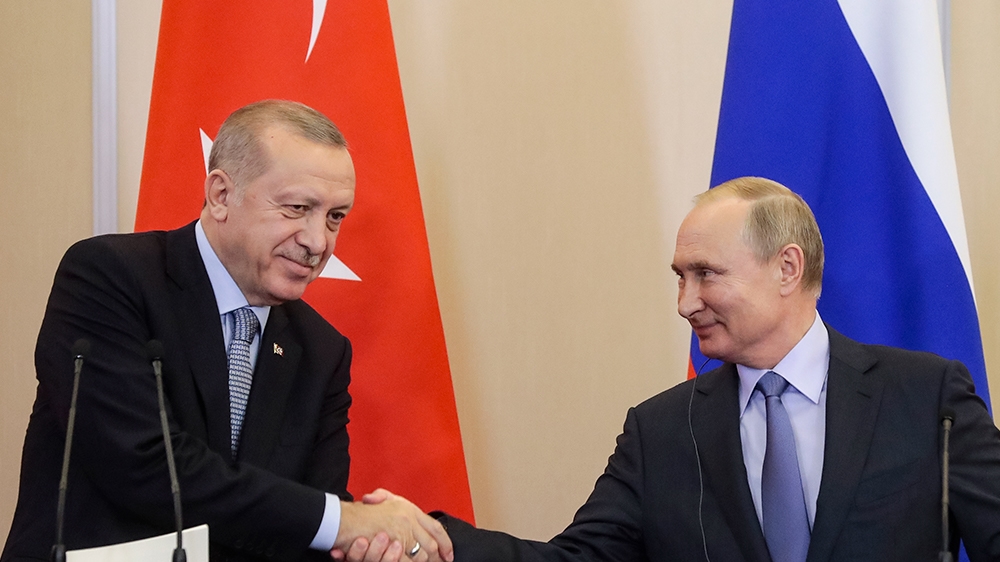 Later on Tuesday, the Turkish defence ministry said in a statement that the US said the withdrawal of Kurdish forces from the “safe zone” was complete, Reuters reported.

Last week, the US and Turkey agreed to a five-day ceasefire in northern Syria. That ceasefire expired on Tuesday.

Jeffrey told the Senate that, with Kurdish withdrawal, Turkey was obligated to halt its operation.

Graham warned that Turkey “must keep its word” to avoid sanctions.

‘Everyone recalibrating their relationship with the US’

Although senators agreed to put a pause on the sanctions resolution, for now, many continued their criticism of Trump over his decision to withdraw troops.

Senator Jim Risch, the Republican chairman for Foreign Relations and leading sponsor of sanctions legislation, said the president’s decisions had led to a “difficult situation” and senators are looking for “constructive” way for Congress to engage.

“It is very obvious that a once strong ally, Turkey, a member of NATO, has really gone in a very bad place,” Risch said.

“Everybody in the region is recalibrating their relationship with the United States,” Senator Bob Menendez, a Democrat, said with “the betrayal” of the Kurds “fully in view” as Erdogan and Putin announced a joint-patrol agreement.

But Senator Rand Paul, a Republican who has supported Trump’s moves to withdraw US troops, told reporters in the Capitol, the US should continue the withdrawal of troops and allow regional players to work out a peace without rushing to impose economic sanctions on Turkey.

“We have had a lot of interesting developments. It would be wise to wait and watch a little bit,” Paul said. “You have Erdogan meeting with Putin. You have Putin allied with Assad. There actually is a chance, a good chance that you could get a more permanent ceasefire and a more stable Syria coming out of this.”

Trump has said that he campaigned on a promise to bring troops home from the Middle East and end “endless wars”. But most of the troops withdrawing from northern Syria are being redeployed elsewhere in the region.

Late on Tuesday, Trump tweeted, “Good news seems to be happening with respect to Turkey, Syria and the Middle East. Further reports to come later!”

For his part, Jeffrey said he was “personally furious” with Turkey’s government for the military action in Syria after the US warned Turkey not to launch the operation.
“Right now, with this government, we have some very serious problems, but not with the state as a whole,” he said.
“There is no doubt that Turkey coming in has threatened all” US objectives in Syria, he added.