US Secretary of State Mike Pompeo has warned that Washington will sanction any country that allows an Iranian tanker previously seized off the coast... 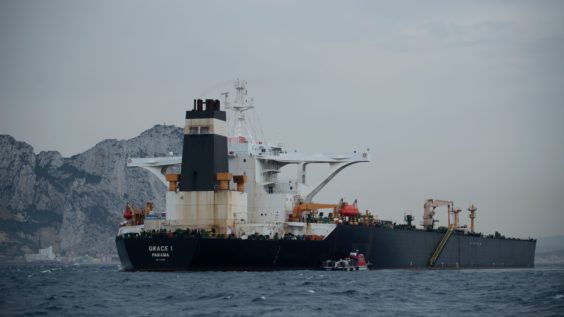 US Secretary of State Mike Pompeo has warned that Washington will sanction any country that allows an Iranian tanker previously seized off the coast of Gibraltar to dock in its territory. In July, the Grace 1 – now renamed Adrian Darya 1 – was seized by British forces over suspicions it was heading to Syria to deliver some two million barrels of oil in contravention of European Union sanctions. The US government made an effort to keep the vessel detained on grounds that it was being directed by Iran’s Islamic Revolutionary Guard Corps (IRGC), which the Treasury Department recently designated a terrorist organization. However, Gibraltar said it could not comply with the request as the EU has not blacklisted the IRGC. Tracking data on Tuesday showed the Adrian Darya 1 heading toward the Greek port of Kalamata, although Athens denied it had received a request to allow the vessel to dock. “We have made clear that anyone who touches [the Iranian tanker], anyone who supports it, anyone who allows a ship to dock is at risk of receiving sanctions from the United States,” Pompeo asserted. “If that ship again heads to Syria, we will take every action we can consistent with those sanctions to prevent that.” Despite the threat, Iran has reportedly sent another vessel, the Bonita Queen, loaded with 600,000 barrels of oil, to Syria. Notably, the Islamic Republic has still not released a British-flagged tanker, the Stena Impero, that IRGC forces seized days after the Grace 1 was held.