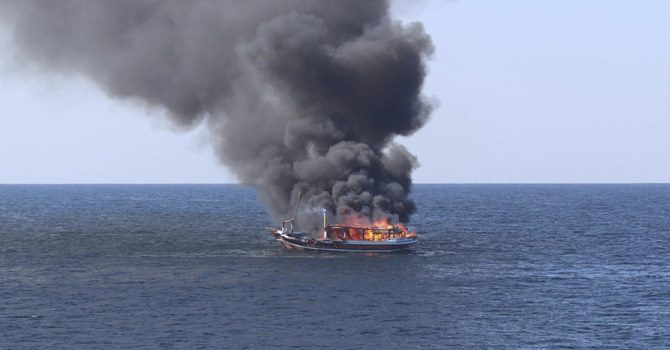 US Navy Rescues Drug Smugglers From Burning Ship off Oman

Iran26
DUBAI: The US Navy said Thursday it rescued five Iranians suspected of smuggling drugs after they apparently set fire to their stash on board... 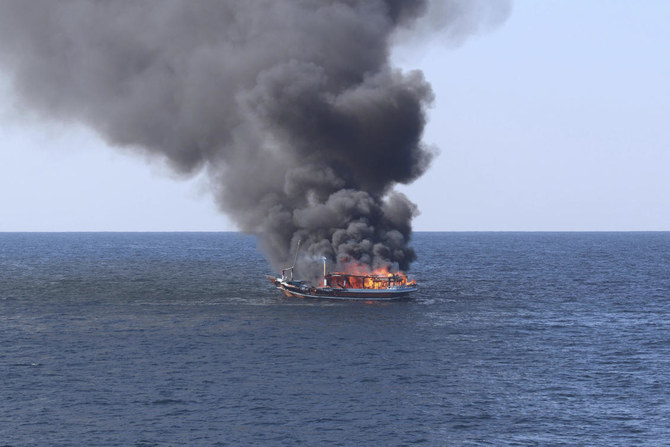 DUBAI: The US Navy said Thursday it rescued five Iranians suspected of smuggling drugs after they apparently set fire to their stash on board a traditional sailing vessel off the coast of Oman, though one remains missing.

The Navy released aerial surveillance footage showing the traditional ship, known as a dhow, as it sailed in the Gulf of Oman on Wednesday. Smoke pours from the vessel after those on board apparently set the fire, with an explosion rocking the ship.

Sailors from the patrol craft USS Sirocco later arrived, rescuing the men. Sailors also recovered over 1,745 kilograms of hashish, 500 kilograms of methamphetamine and 30 kilograms of heroin. The Navy valued the recovered drugs as worth $14.7 million.

Sailors believe that represented only half of all the drugs on board the dhow, with the rest burning up or sinking with the vessel, said Cmdr. Timothy Hawkins, a spokesperson for the US Navy’s Mideast-based 5th Fleet.
The five Iranians rescued from the dhow received medical treatment and have been handed over to authorities in Oman, the Navy said. Iran did not immediately acknowledge the incident Thursday.

The Navy and allied forces in the region conduct anti-narcotic patrols throughout Mideast waterways. Smugglers often use dhows to transport heroin from Afghanistan and other drugs quietly through the region.