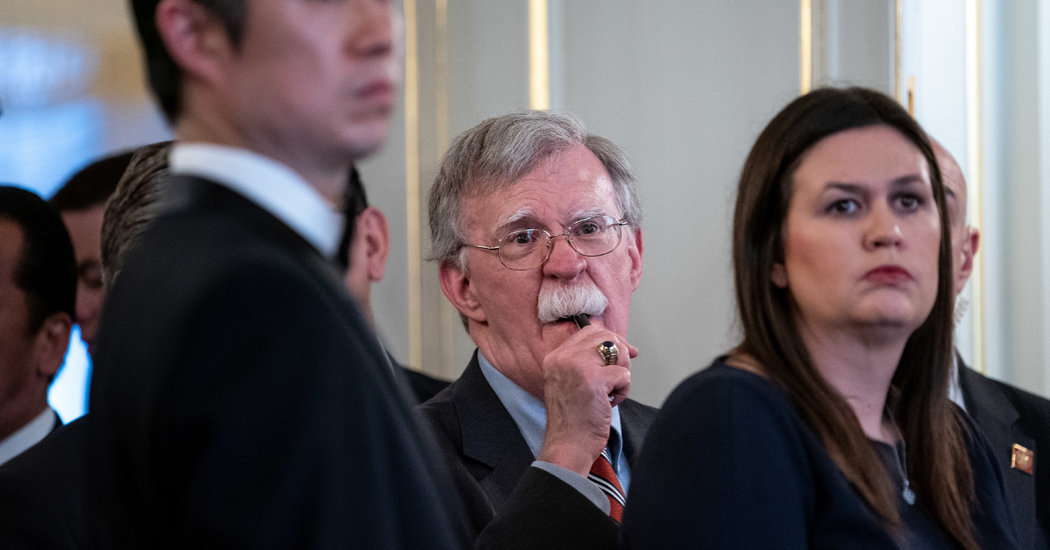 John R. Bolton, President Trump’s national security adviser, on Wednesday accused Iran of playing a key role in recent attacks on ships off the coast of the United Arab Emirates, the latest instance in which he has articulated a more hawkish view than his boss toward Iran.

Ratcheting up his criticism of Tehran, Mr. Bolton tied the attacks this month on four oil vessels at the mouth of the Persian Gulf to “naval mines almost certainly from Iran.”

President Trump withdrew last year from the 2015 nuclear accord that world powers struck with Iran and then reimposed broad sanctions, but in his comments to journalists during a visit to the emirates, reported by Reuters and The Associated Press, Mr. Bolton said there was “no reason” for Iran to breach the nuclear deal unless it were actually seeking atomic weapons.

“There’s no reason for them to do it unless it is to reduce the breakout time to nuclear weapons,” he told journalists in Abu Dhabi, according to The A.P.

Mr. Bolton’s remarks in the emirates, a key American ally in the region, come as Mr. Trump has increasingly taken public issue with some of Mr. Bolton’s more provocative assertions about Iran and its motivations.

For instance, the president said during his just-completed trip to Japan that he was not in favor of regime change in Tehran, an approach that Mr. Bolton had expressed support for before moving back into government.

The tensions over the reported maritime attacks, in which four vessels were said to be damaged this month, raised fears of an armed conflict in the region and concerns about possible disruptions to the world’s oil supplies.

The United States had earlier tightened sanctions against Iran and mobilized an aircraft carrier, bombers and an antimissile battery to the Persian Gulf to deter what the Trump administration has described as a heightened risk of Iranian aggression.

While the reported maritime attacks amplified fears about those escalating tensions, Saudi Arabia, the United Arab Emirates and the Norwegian company whose ships were targeted failed to immediately assign blame.

In his remarks about the maritime attacks, Mr. Bolton also said that a recent attack on the Saudi city of Yanbu, a key oil port, had failed and that Iran was behind that incident as well, although he did not elaborate.

The Trump administration has asserted that Iran is mobilizing its proxy groups in the region in response to increasingly harsh American economic sanctions, but it has not provided evidence to support those claims.

The Iran issue is not the only one in which Mr. Bolton has appeared to be out of step with the president. During Mr. Trump’s four-day visit to Japan, the president also contradicted his adviser on tensions with North Korea.