Trump arrives for a news conference in New York, September 25, 2019, on the sidelines of the United Nations General Assembly Washington,...

Trump arrives for a news conference in New York, September 25, 2019, on the sidelines of the United Nations General Assembly [Saul Loeb/AFP]

After previously resisting calls from members of Congress to release the complaint, the White House sent its contents to the House and Senate Intelligence Committees on Wednesday.

Republican Senator Ben Sasse told reporters that there are “real troubling” things in the report, adding that “Republicans ought not just circle the wagons”.

But other Republicans said they did not see anything that was concerning to them.

“I haven’t seen anything that bothers me,” said Mike Conaway, a Republican member of the House Intelligence Committee.

Reports of the complaint, as well as Trump comments surrounding it, were the basis of Speaker Nancy Pelosi’s decision to announce the House was moving forward with an official impeachment inquiry of Trump.

The complaint was reportedly centred on a June phone call between Trump and Ukrainian President Volodymyr Zelensky in which the US president prodded his Ukrainian counterpart to investigate political rival Joe Biden, who is running for the Democratic presidential nomination. A memo of the phone call was released earlier on Wednesday.

Acting Director of National Intelligence Joseph Maguire had been prevented from giving Congress the whistle-blower complaint by White House and Justice Department lawyers who argued it did not rise to a sufficient level of concern. Maguire is scheduled to testify publicly before Schiff’s committee on Thursday.

Wednesday’s House vote came after the US Senate unanimously approved a similar non-binding resolution with Republicans joining Democrats in support of the measure and putting pressure on the White House to be more forthcoming.

Trump has repeatedly denied any wrongdoing. At a news conference before Wednesday’s vote, Trump denied he had linked delivery of US military aid to Zelensky’s help in investigating Biden.

“I didn’t do it,” Trump said. “You take a look at that call. It was perfect. There was no quid pro quo.”

At the time of the call, Trump was withholding nearly $400m in military aid to Ukraine.

He has called the Democrats’ impeachment inquiry “witch-hunt garbage” and a “hoax”. 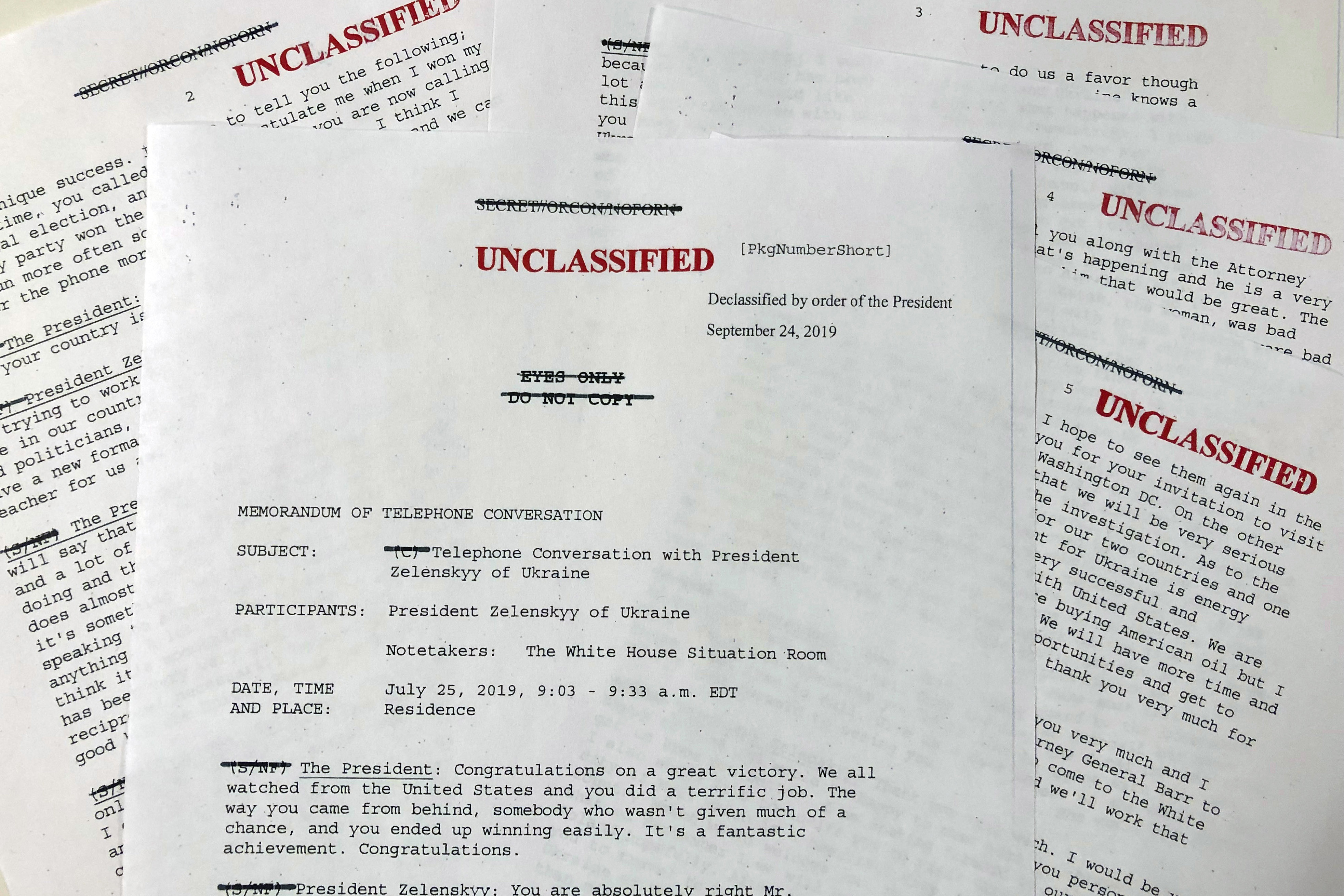 “I respect the responsibility of the president to engage with foreign leaders as part of his job. It is not part of his job to use taxpayer money to shake down other countries for the benefit of his campaign,” Pelosi said in a statement released by her office earlier today.

Schiff told reporters at a news conference the president’s phone call “was a classic Mafia-like shakedown”.

Many House Democrats called the information in the Trump-Zelensky call evidence of impeachable conduct by the president. Others withheld judgment saying the goal of the impeachment inquiry should be to methodically assemble the facts.

“You have to lay out the facts very carefully. We don’t have all the facts yet. That’s why we are going to have hearings because you have to gather the facts, particularly on this Ukrainian situation,” said Representative Donna Shalala, who served in the administration of former President Bill Clinton during his impeachment in 1998.

Republicans sought to discount the implications of what Trump said in the phone call, saying there is no evidence the president was linking the future delivery of US military aid to Zelensky opening an investigation of Biden’s family.

Americans are tired of what they see as political games in Washington, said Representative Dan Crenshaw, a Republican and former US Navy SEAL.

“The Russian collusion thing, all of this stuff, this is so far down the list when it comes to regular voters,” Crenshaw told Al Jazeera.

“They see this as noise in the media. They are exhausted by what they perceive to be political games. And in this case, boy, are they right,” he added. “This is the height of political gamesmanship. This attempt to read-in to some kind of ill intent behind the president’s conversation is beyond the pale. You have really got to squint. You have got to do mental gymnastics.”

Representative Al Green, the first Democrat to push for impeachment earlier this year, said he expects the political dialogue going forward in the US to be divisive as Democrats move forward on impeachment.

The House is preparing to take a two-week break from Washington and members will be going home to their districts where they inevitably will have to face voter’s questions.

“It is very important that members go home and explain to their constituents their thinking,” Representative Steny Hoyer, the number-two Democrat leader, told reporters. “This is a matter of grave importance and the American people need to understand what is occurring.”