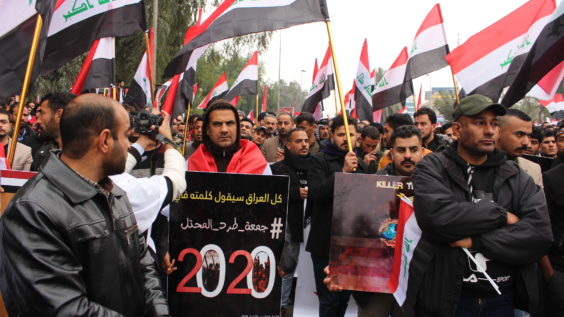 Reports in Kurdish media said installations would be built in North

[ERBIL, Iraq] The US military has denied reports appearing in Kurdish media that it will build new military bases in Iraq’s Kurdistan region.

“The US is not planning on building any new bases in Iraq,” a spokesperson for the US-led anti-Islamic State coalition, officially known as Combined Joint Task Force – Operation Inherent Resolve (CJTF-OIR), told The Media Line.

The United States currently has about 5,000 troops in Iraq to help the country in its continued fight against ISIS. They are stationed at a number of installations alongside Iraqi and other coalition forces.

Their situation became tenuous following the January 5 Iraqi parliament vote to expel American forces from Iraq. The vote came after the US assassinated top Iranian commander Qasem Soleimani on January 3 in Baghdad.

The US also came under pressure when a rocket or mortar shell hit its embassy in Baghdad on January 26. Rocket attacks on the city’s so-called Green Zone, which houses embassies and government offices, are common. However, this strike was unique in that it hit the embassy compound directly, causing at least one injury.

Protests against the US military presence in Iraq, including recent attempts to storm the embassy compound, started in Baghdad late last year and have coincided with mass protests against Iraqi government corruption and the presence in the country of Iran-backed militias. Many of the protesters against the US presence, including those who attempted to take over the embassy, are supporters of these militias.

Amidst this pressure on the US came the claims of plans for new US bases in the Kurdish region, where there are already US forces, and anti-American sentiment is significantly lower.

The popular Peshmerga Facebook page, named after, but not affiliated with, the Kurdistan Region’s military, posted the same claim on January 25, citing “unconfirmed reports.”

Regarding a possible repositioning of troops within Iraq, the CJTF-OIR spokesperson said that any movement would be coordinated with the Iraqis and could not be made public for security reasons.

“All repositioning of forces is coordinated through our partners and must not be released in order to maintain operational security of those conducting the missions,” the spokesperson told The Media Line.

US Secretary of State Mike Pompeo addressed the military’s “force posture” in Iraq during a speech at Stanford University on January 13, saying the US was in talks with Sunni, Shi’ite and Kurdish politicians.

“They won’t all say so publicly, but privately, they all welcome the fact that America is still there executing its counter-terror campaign,” Pompeo said.

Sunni and Kurdish politicians did not show up for the January 5 Iraqi parliament vote to expel US forces, meaning those present and voting were mostly from Iraq’s Shi’ite-majority community.

A Kurdish member of parliament told The Media Line that the US should continue to help Iraq fight ISIS – but not use Iraqi soil to fight Iran.

“We need the US forces to continue working with our forces in the fight against ISIS without violating the mandate by targeting Iranian elements,” Sarkawt Shams, of The Future bloc, said.

The anti-government protesters in Baghdad are largely anti-Iran, which they see as the primary backer of the militias that are accused of using snipers and other gunmen against them. Their opinions on the US are more mixed.

“As protesters, we categorically reject the administration of Iraq in accordance with US or Iranian interests,” Ahmed al-Badri, a protester from Baghdad who fled to Erbil after a kidnapping attempt late last year, told The Media Line.

Badri said he condemned the attacks on the US Embassy, but believes the American invasion in 2003 that toppled the regime of Saddam Hussein is what led to the current political situation, where power is divided along religious and ethnic lines.

“The history of the American interventions in Iraq had a bad effect,” Badri said, “including the creation of this political system based on ethnic and sectarian quotas, which is the reason for all the crises in Iraq today.”

Ahmed Ali, a protester active in Baghdad, also condemned the attack on the US Embassy, blaming it on the Iran-backed militias.

“It is a disgraceful act that weakens the prestige of the Iraqi state,” he told The Media Line.

Ali said he wants the US to remain active in Iraq, but in a non-military way.

“Remain [here], strengthening political and economic relations between Iraq and the USA,” he said.

The US military has made it clear in the meantime that it intends to stay. The coalition’s spokesman regularly uses social media to praise efforts by Iraqi security forces to fight ISIS and other hostile actors in the country.

The parliamentary vote to expel US troops has yet to be enacted, and the US is conducting business as usual – for the time being.