Esper said he planned to meet with Afghan President Ashraf Ghani US Defense Secretary Mark Esper has arrived in Afghanistan where stalled... 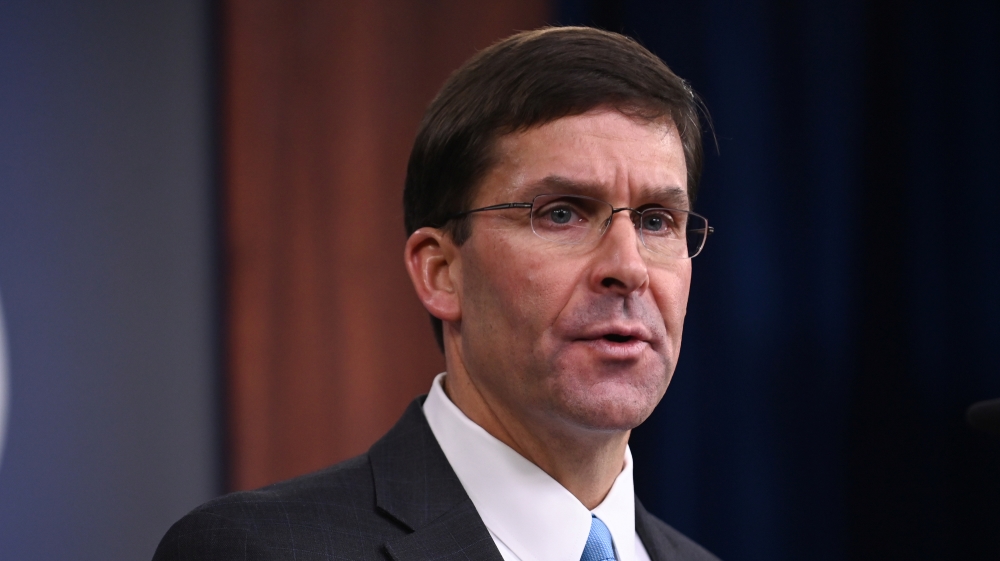 US Defense Secretary Mark Esper has arrived in Afghanistan where stalled peace talks with the Taliban and persistent attacks by armed groups have complicated the Trump administration’s pledge to withdraw more than 5,000 American troops.

Esper told reporters travelling with him that he believed the US could reduce its force in Afghanistan to 8,600 without hurting the counterterrorism fight against al-Qaeda and the Islamic State of Iraq and the Levant (ISIL, ISIS) group.

But he said any withdrawal would happen as part of a peace agreement with the Taliban.

The US has about 14,000 American troops in Afghanistan as part of the US-led coalition.

US forces are training and advising Afghan forces and conducting counterterrorism operations.

President Donald Trump ordered a troop withdrawal in conjunction with the peace talks that would have left about 8,600 American forces in the country.

US envoy Zalmay Khalilzad brokered a preliminary peace deal with the Taliban, but a surge in Taliban violence and the death of an American soldier last month prompted Trump to cancel a secret Camp David meeting where the agreement would have been finalised.

He declared the tentative agreement dead.

“The aim is to still get a peace agreement at some point, that’s the best way forward,” said Esper, who was making his first trip to Afghanistan as defence secretary.

He would not say how long he believed it might be before a new peace accord could be achieved.

In early October, a month after the peace agreement collapsed, Khalilzad met with the Taliban in Islamabad, Pakistan, but it was not clear what progress, if any, was being made.

Both Ghani and his current partner in the unity government, Chief Executive Abdullah Abdullah, have said they believe they had enough votes to win.

Esper also plans to meet with his top commanders in Afghanistan as the US works to determine the way ahead in the 18-year war.