The US ambassador to Israel on Tuesday said Israel’s “secret weapon” was that it was “on the side of God”, local media reported. Ambassador... 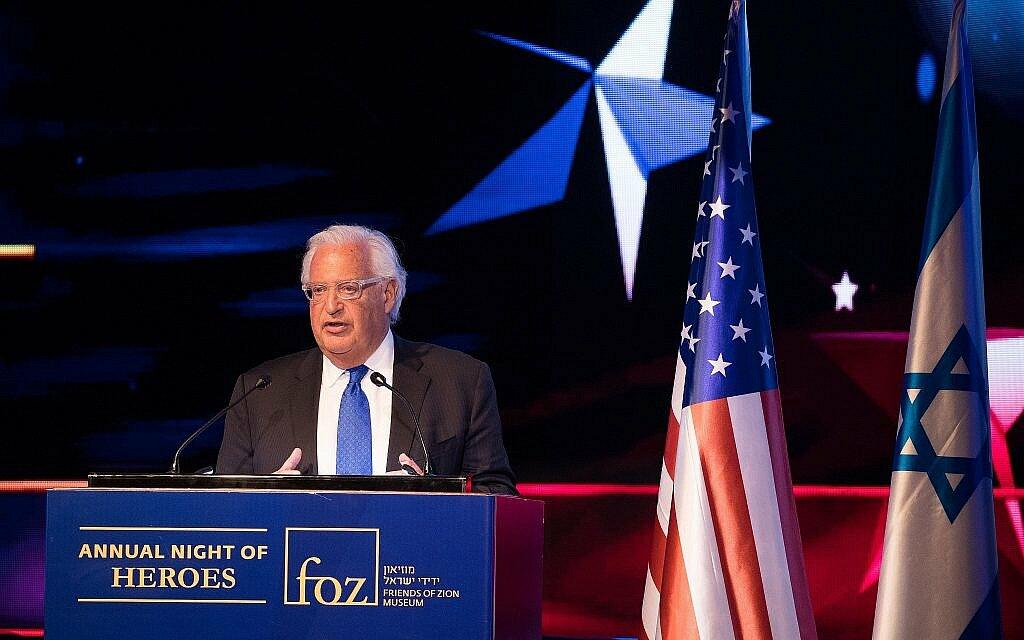 The US ambassador to Israel on Tuesday said Israel’s “secret weapon” was that it was “on the side of God”, local media reported.

Ambassador David Friedman also claimed the embassy, which he described as a “shrine”, had not prompted any violence in Israel or Palestine, despite the killing by Israeli forces of 60 Palestinian protesters on the day of its inauguration last year.

The comments came on the eve of Nakba Day, the commemoration of the mass displacement of hundreds of thousands of Palestinians during the foundation of the state of Israel in 1948, and on the one-year anniversary of the US Embassy’s move to Jerusalem.

“Israel has one secret weapon that not too many countries have: Israel is on the side of God. And we don’t underestimate that,” Friedman said at a Jerusalem gala celebrating the embassy move anniversary on Tuesday evening.

Friedman, a former lawyer and campaigner advisor for President Donald Trump, was appointed ambassador to Israel in early 2017.

Later that year, Trump officially recognised Jerusalem as the capital of Israel and declared the US would move its embassy from Tel Aviv to the contested city.

The US embassy in Jerusalem was officially inaugurated on 14 May 2018 to coincide with the 70th anniversary of Israel’s founding the next day.

Friedman described the embassy as a “new shrine” in the city, which hosts a number of religious sites significant in Christianity, Judaism and Islam.

“We have done something that has not been in quite some time: We have created a new shrine in the ancient city of Jerusalem, and we’re extremely proud of it,” he told gala attendees, including recently re-elected Israeli Prime Minister Binyamin Netanyahu.

Friedman went on to describe the embassy as being akin to a pilgrimage site.

“People get out of the bus and people just stare,” the envoy said.

Ambassadors are typically expected to be politically neutral in the domestic politics of the country in which they serve, according to international diplomatic protocol.

Friedman’s comments come at a controversial time when tensions are on the rise between Palestine and the US.

Relations between the two countries had already been strained by the US recognition of Jerusalem as the capital of Israel, in addition to Trump’s more recent recognition of the Israeli annexation of the occupied Syrian Golan Heights.

The Trump administration is due to release its hotly anticipated “Deal of the Century” Israel-Palestine peace plan next month.

Palestinian political leaders and civilians alike have already rejected the plan following numerous leaks which suggest the peace deal will be heavily weighted in Israel’s interests.

Friedman also rejected claims the embassy move had stoked violence between Israeli forces and Palestinians in his gala speech.

“All the predictions, even some of our own predictions about what could happen, about the risks, about the violence, about the gloom, the doom — the reality is that in the entire city of Jerusalem that day I don’t think more than 20 people got up to protest,” he said.

While weekly protests on the border between the besieged Gaza Strip and Israel over the past year – held under the banner of the “Great Return March” – have focused on the Palestinian right to return, Palestinians in Gaza and the West Bank have also demonstrated against the US embassy move.

Palestinians protesting on the Gaza border against the US embassy move on 14 May last year faced live bullets and tear gas, with 60 protesters killed on that day alone, according to the Palestinian Ministry of Health.

Speaking after Friedman, Netanyahu said Israel – celebrating its 71st anniversary on Wednesday – had had “no better friend in the White House” than Trump.

The Israeli premier thanked Trump for the embassy move, which he called a “politically incorrect” decision.