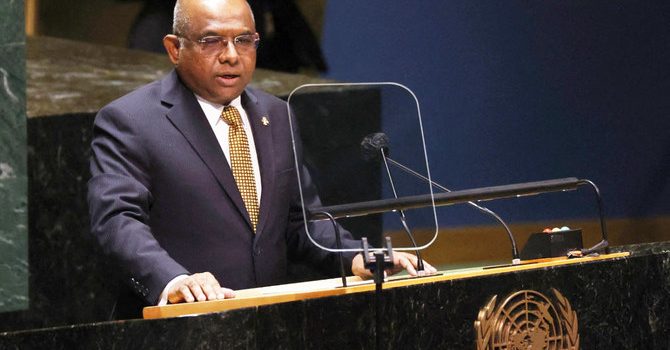 UN Warned Its Credibility Is At Stake Over The Palestinian Question

Israel27 Palestine12
NEW YORK: There is more at stake in the Israeli-Palestinian conflict than peace and security in the Middle East, according to Abdulla Shahid, the... 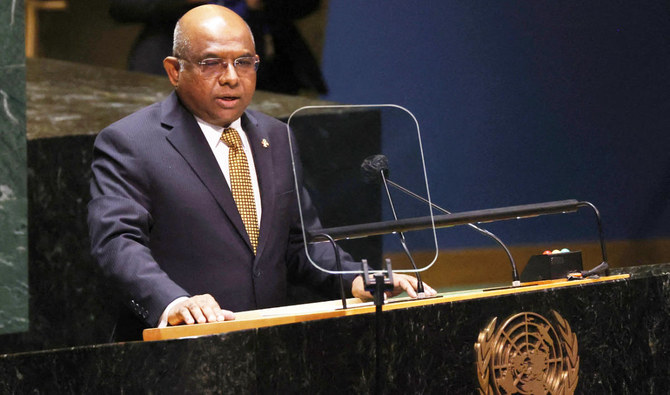 NEW YORK: There is more at stake in the Israeli-Palestinian conflict than peace and security in the Middle East, according to Abdulla Shahid, the president of the UN General Assembly.

The reputation of the global community and its ability to work together to resolve international disputes, in keeping with the founding vision of the UN, is also on the line, he warned.

“That is why we cannot give up hope,” said Shahid as he called on member states to make every effort to join forces to resolve the conflict in line with international human rights and humanitarian laws, and the UN charter.

“We must maintain the credibility of this great institution and push for positive dialogue and engagement between the parties involved.”

Speaking on Wednesday during a plenary meeting of the General Assembly to discuss the Palestinian question and the situation in the wider Middle East, Shahid described as “disheartening” the lack of progress on an issue that has been on the UN agenda since the organization’s earliest years.

The situations in Palestine and the wider region are “deeply intertwined,” he said.

“We have seen time and time again how the spillover effects of the Palestinian-Israeli dispute undermine the stability of the broader region,” he added.

“As long as the Palestinian people are deprived of statehood, as long as illegal settlements continue to be built on land that Palestinians are justly entitled to, as long as Palestinian families are forced to flee the violence and injustices against them and they cannot return home, anger and bitterness will fester.

“This will contribute to a cycle of violence that has gone on for far, far too long.”

The plenary session came days after the 74th anniversary of resolution 181, which was passed by the General Assembly on Nov. 29, 1947. It called for the partition of Palestine into Arab and Jewish states, with the city of Jerusalem a separate entity to be governed by an international regime.

Facilitating a two-state solution based on pre-1967 borders is the “most important thing” the world can do to help resolve the conflict, said Shahid, who called for an acceleration of the multilateral political process to find a just and peaceful settlement.

Turning to key issues affecting Palestinians, he said it is time for the international community to back its words with actions in terms of humanitarian assistance, support for efforts to resolve the conflict, and upholding the dignity of Palestinians.

“Year after year we speak of the appalling humanitarian crisis in Palestine, especially the Gaza strip,” Shahid said. “But words are insufficient. Words cannot substitute for the lack of running water, electricity, proper sanitation, and decent living conditions that millions of Palestinians endure.

“Words can express how COVID-19 has exacerbated these challenges but they cannot resolve them. Words cannot save Palestinian people suffering from decades of occupation, arbitrary arrests and the use of excessive force against them. Words cannot restore their demolished homes or halt the proliferation of illegal settlements on their land.”

More than half of the five million Palestinians in the Occupied Territories are dependent on humanitarian assistance to survive. That number rises to 80 percent in Gaza, where residents “cry out for access to even basic amenities and services,” Shahid said.

The many Palestinian refugees across the Middle East are also in jeopardy, he added, highlighting the large shortfall in funding for the UN Relief and Works Agency for Palestine Refugees in the Near East. He called on the international community to ensure it provides enough financial support to maintain the life-saving work of the agency.

“Let us all come together as an international community and reiterate our commitment to protect the rights of the Palestinian people,” said Shahid.

“Let us grant them what they have been justly demanding for so long: dignity, statehood and respect.”