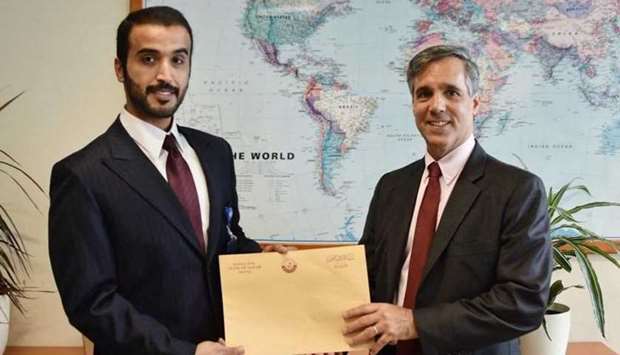 The United Nations has praised Qatar’s support for the United Nations Office on Drugs and Crime (UNODC) in Vienna.
Director, Division for Treaty Affairs at UNODC John Brandolino expressed his sincere appreciation for the continued support provided by Qatar to the activities of the UNODC and to enhancing international co-operation to address the threats posed by the transnational organised crime.
He expressed his hope for further co-operation between the two sides in the future.

This came during a meeting between Brandolino and Qatar’s Acting Charge d’Affaires in Vienna Abdullah bin Nasser al-Fahid (Pictured below).
The official expressed his gratitude for the Qatari government’s approval to extend the World Program for the implementation of the Doha Declaration, launched by Qatar in support of world peace and development, and to strengthen the capacities of states to combat organised crime and related drug crimes, terrorism and corruption and to immunise the public, especially young people, from the dangers of such crimes.