At 23:00 GMT on Friday, January 31, the UK will officially end its 47-year membership of the European Union London, United...

At 23:00 GMT on Friday, January 31, the UK will officially end its 47-year membership of the European Union [File: Andy Rain/EPA-EFE]

London, United Kingdom – After more than three years of political wrangling, the departure of two prime ministers, and dozens of furious protests across the United Kingdom, Brexit is finally happening.

At 23:00 GMT on Friday, January 31, the UK will officially end its 47-year membership of the European Union – becoming the first country ever to leave the bloc, and enter a transition period scheduled to end on December 31, 2020.

Friday’s breaking of the ranks does not signal the end of Brexit, but the start of a new, potentially tumultuous chapter in the saga, leaving the UK just 11 months to negotiate a deal to be agreed by all 27 remaining EU states.

This week saw the final debate over the UK’s departure from the EU take place in Brussels.

After Members of the European Parliament (MEPs) backed the terms of the Brexit agreement, they broke out into song.

The Green Party’s Molly Scott Cato cried as she spoke of her hopes to one day return to the chamber, while the Brexit Party’s Nigel Farage and his colleagues were admonished for waving Union flags.

For about half of the UK population – 52 percent voted to quit the bloc in the June, 2016 referendum, Brexit day is being greeted with long-awaited celebrations.

Street parties are set to take place across the nation.

The Conservative MP for Dover has called for fireworks so spectacular they can be seen from France, and more than 10,000 people are expected to flood the streets of Westminster from 21:00 GMT to mark what Farage, a hard-right figure who campaigned to leave, has called “a huge moment” in the UK’s history.

But for the other half – the 48 percent who voted to remain – it is a day of mourning.

During the 11-month transition period, “nothing in reality will change”, said Jonathan Portes, professor of economics and public policy at King’s College London.

The UK will continue to follow all of the EU’s rules and its trading relationship will remain the same, but it will not be part of EU political institutions and there will be no British members of the European Parliament.

“The vast majority of individuals and businesses won’t notice anything,” said Portes.

The government’s first priority will be to arrange a trade deal for future commercial relations with Europe, if it wants to avoid economic losses with its largest trading partner, but analysts question whether a comprehensive deal can be achieved in 11 months – a deadline Prime Minister Boris Johnson has insisted upon.

“It’s a very quick timeline and not a huge amount of room for a bespoke agreement,” said Marley Morris, associate director at the Institute for Public Policy Research, a London-based think-tank.

“The government is likely to prioritise getting a deal quickly and avoiding delays,” he added.

Portes agreed. “There won’t be a deep, comprehensive trade deal,” he said.

“The timeframe is less of a problem than the politics.”

The key issue is “whether the UK is going to stick to its position of maintaining regulatory autonomy and not agreeing to alignment with EU rules, and what impact that could have on trade deals”.

Sajid Javid, UK chancellor, has ruled out continued alignment with EU regulations, echoing Johnson, who has repeatedly said he wants to break free from the bloc’s rules.

But the EU has said it requires the UK to stay in line if it wants a zero tariffs, zero quotas trade deal.

If no trade deal has been agreed and ratified by the end of 2020, the UK could face World Trade Organization-mandated tariffs on exports to the EU.

“Trade would suffer and some foreign investors would likely pull out of major industries, such as the thriving automotive sector,” said James McBride, a deputy editor at the Council on Foreign Relations.

In October, a joint statement from aerospace, automotive, chemicals, food and drink and pharmaceutical sectors, which contribute a total of 98 billion pounds ($128bn) to the UK economy each year, warned the UK’s Brexit plans could pose a “serious risk to manufacturing competitiveness”.

The UK and EU will also have to negotiate the future of its relationship on law enforcement, data sharing and security, aviation standards and safety, access to fishing waters, and the regulation of medicines.

For example, the UK is set to leave the European Arrest Warrant scheme – which allows British police to arrest EU nationals on behalf of European police services – and will have to agree to a replacement.

After the transition period, the UK will create a new immigration system that will end freedom of movement.

The right of EU nationals who currently live in the UK, however, will not be affected, officials have promised.

The ruling Conservatives have pledged to introduce an “Australian-style points-based system to control immigration”, an approach that will treat non-EU citizens and EU citizens (unless they are Irish citizens) wishing to move to the UK the same.

Earlier this week the independent Migration Advisory Committee dismissed the system as “pointless“.

It is still uncertain exactly how the plan will work.

“In practice, EU citizens will probably find it harder to live and work in the UK in the future,” said Morris.

“The question will come down to: Why are you coming to the UK? What kind of job can you fill? It wants to limit migration into low-paid, low skilled jobs. There’s likely to be a more liberal approach to filling higher-skilled jobs.”

For UK citizens, it will also be harder to live and work abroad – but this ultimately depends on negotiations with individual member states, adds Morris.

Some analysts are concerned that an EU without the UK means a weaker Europe, particularly in a global context in which the US is increasingly protectionist, and China increasingly aggressive.

“Clearly, losing one of the big member states is a significant blow to the EU,” said Portes, “and it does reduce its geopolitical and security clout. It’s hard to know what the medium to long-term impacts will be.” 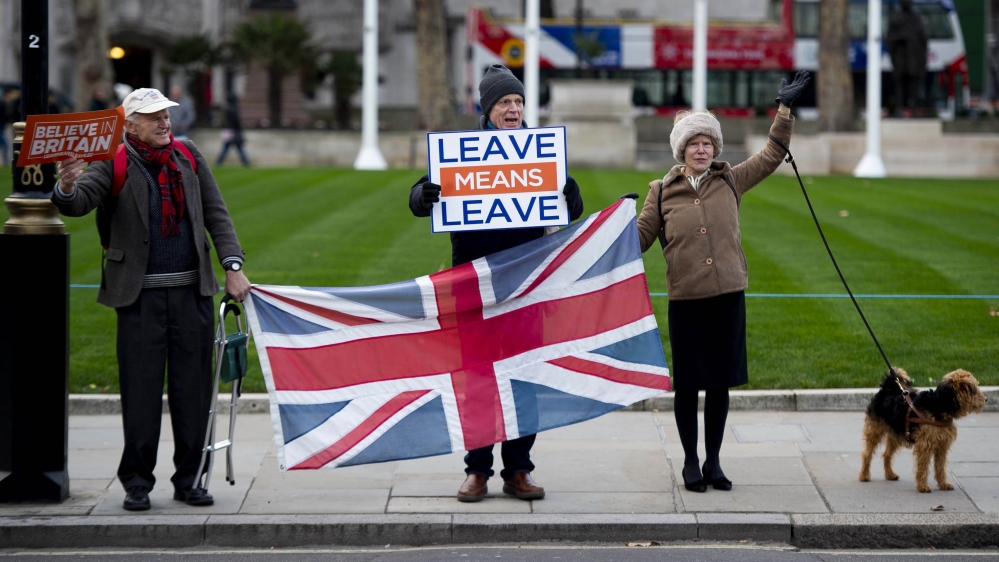 Pro-Brexit protesters stand outside the Houses of Parliament in London, Britain, 14 January 2019 [File: Will Oliver/EPA-EFE]