The United Kingdom does not expect the United States to request it to join in a war with Iran, and London would be unlikely... 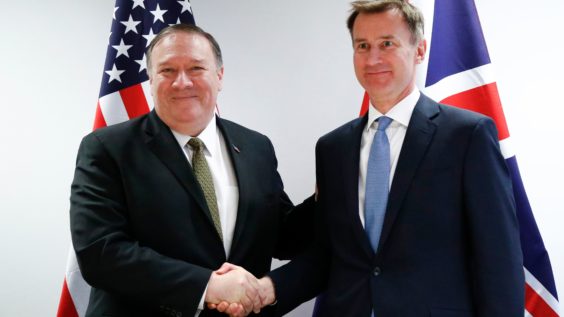 The United Kingdom does not expect the United States to request it to join in a war with Iran, and London would be unlikely to agree to participate, Foreign Secretary Jeremy Hunt said on Tuesday. “The US is our closest ally. We talk to them the whole time. We consider any requests that they say carefully, but I cannot envisage any situation where they request or we agree to any moves to go to war,” Hunt told parliament. He added that regarding the multilateral 2015 nuclear deal with the Islamic Republic, the message being sent to Britain’s partners in the European Union, particularly France and Germany, is that it is “absolutely essential that they stick to that deal in its entirety” in order to have “a nuclear-free Middle East.” Iran announced last week it would soon surpass the limits delineated by the pact on how much enriched uranium it could stockpile. Washington and Tehran have been in a war of words ever since the former withdrew from the agreement last year and reimposed sanctions on the latter. Tensions have further flared over recent attacks against US allies in the Gulf, leading to an increase in the deployment of American troops to the region as well as sanctions on Iranian Supreme Leader Ayatollah Ali Khamenei.