U.S. Withdrawal from Syria Gathers Speed, Amid Accusations of Betrayal

QAMISHLI, Syria — A long convoy of United States troops crossed into Iraq from Syria early Monday, accelerating a withdrawal of American forces from... 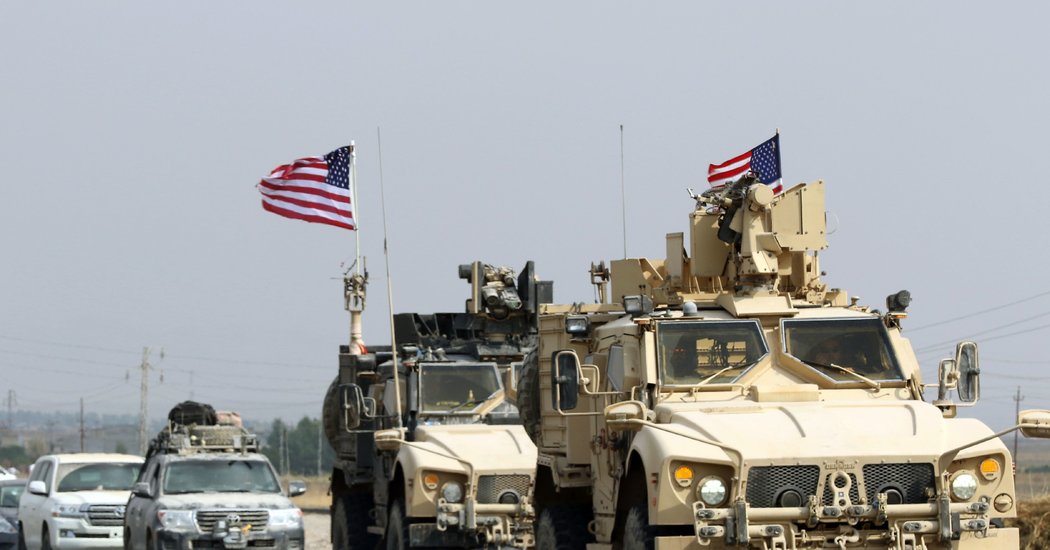 QAMISHLI, Syria — A long convoy of United States troops crossed into Iraq from Syria early Monday, accelerating a withdrawal of American forces from northern Syria that set the stage for the Turkish invasion of Kurdish-controlled land.

More than 100 American military vehicles left Syrian Kurdish territory in the early hours of the morning, according to a cameraman for the Reuters news agency who was at the border crossing.

President Trump’s withdrawal of most American troops from Syria, which cleared the way for Turkey to attack Kurdish forces, has prompted Republicans and Democrats alike to accuse him of abandoning a United States ally. A coalition of Syrian Kurdish fighters, Americans and other foreign troops had fought the Islamic State there since 2014.

Defense Secretary Mark T. Esper confirmed on Monday that the United States was considering keeping a small force in northeastern Syria, alongside the Kurdish-led Syrian Democratic Forces, to prevent oil fields there from falling into the hands of the Islamic State. The Times reported that Mr. Trump was leaning in favor of leaving perhaps 200 troops there.

The withdrawal, which began Oct. 6, has drastically reduced American clout in Syria, ceding more control and influence to the Syrian government, Russia and Iran. It has also raised fears of a revival of ISIS, the extremist group that once controlled an area in Iraq and Syria that was the size of Britain.

Around 1,000 American troops are being withdrawn. Though Mr. Trump has characterized the move as bringing troops home, Mr. Esper said on Sunday that most forces would be redeployed to western Iraq, where they would continue operations against the Islamic State.

In an earlier phase of the withdrawal, coalition forces bombed their own base and arms cache in northern Syria to prevent enemies from using it.

Small groups of residents in northeastern Syria protested the American withdrawal, footage broadcast by Syrian television networks showed. One group stoned an American armored vehicle as it passed through Qamishli, a major city in Kurdish-held territory, while another tried to block the convoy’s progress by standing in its path and holding placards of protest.

“The Americans are running away like rats,” one man could be heard shouting.

Some Syrian Kurds see the withdrawal as a form of betrayal, since it has enabled Turkish-led forces to invade the area and potentially force Kurds from their ancestral homes.

“There will be ethnic cleansing of the Kurdish people from Syria, and the American administration will be responsible for it,” Mazlum Kobani, whose Kurdish-led force fought the Islamic State in Syria, said on Sunday in an interview with The Times.

Turkish officials say their campaign is targeting only Mr. Kobani’s militia, rather than Syrian Kurds at large. Over 200 Syrian civilians have died since the invasion began, while at least 20 have died in Kurdish counterattacks in southern Turkey. More than 170,000 people have been displaced, according to estimates by the International Committee of the Red Cross.

Until this month, northeastern Syria had largely been under the control of the Syrian Democratic Forces, a Kurdish-led militia that had used the chaos of the eight-year civil war to establish an autonomous region that operated independently of both the central government in Damascus and Syrian Arab rebel fighters.

The American-led campaign against the Islamic State, a militant group also known as ISIS, allowed the Kurdish force to expand its territory and take over the governance of land seized from the extremists.

But the creation of an American-backed and Kurdish-held canton along the Turkish-Syrian border became a source of great anxiety for the Turkish government, which considers the Kurdish militia a threat to national security. The militia is an offshoot of a guerrilla movement that has waged a decades-long insurgency against the Turkish state.

The American withdrawal has allowed Turkish troops and its Syrian Arab proxies to seize control of more than 900 square miles of territory once held by Kurds, according to President Recep Tayyip Erdogan of Turkey.

After a stuttering start to an American-mediated cease-fire, Turkish and Kurdish fighters are largely now adhering to a five-day truce that is to last until Tuesday evening. Sporadic skirmishes continue, but Kurdish fighters have been able to withdraw from a strategic town on the Syrian border.

Mr. Erdogan has said that all Kurdish fighters must retreat from a central pocket of former Kurdish-held territory by Tuesday night, and he has threatened to expand the Turkish invasion if any Kurdish fighters remain.

Mr. Erdogan wants to use the land to create a sphere of Turkish influence in northern Syria in which Syrian refugees who currently live in Turkey can be resettled.