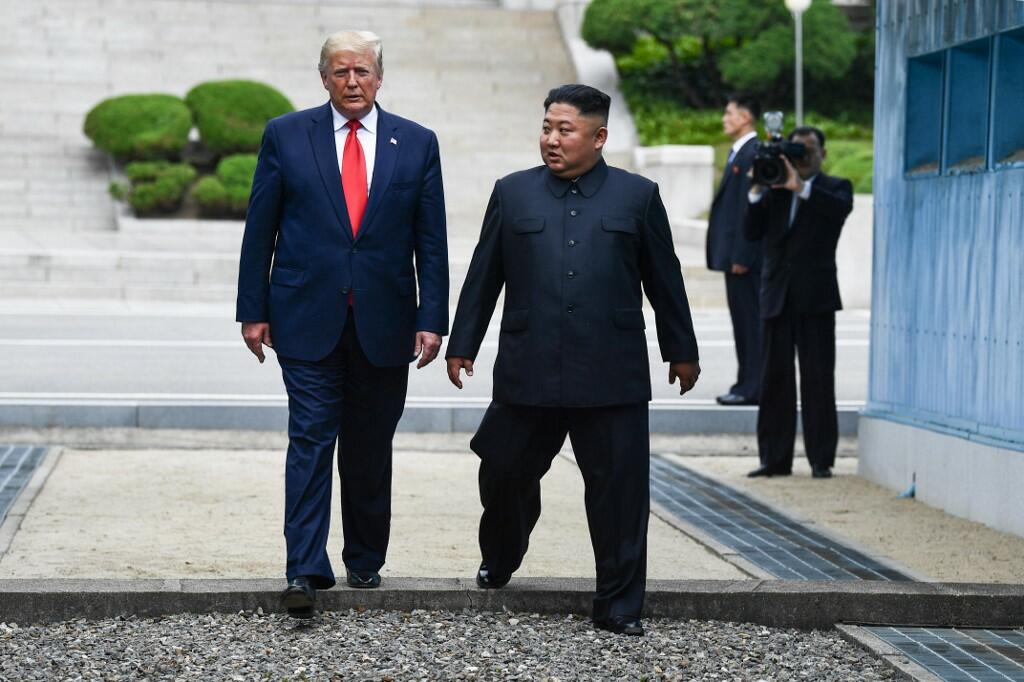 In a brief press interaction, Trump said he was honored to meet Kim at DMZ.

The North Korean leader said that he also wanted to meet U.S. president at DMZ “to leave behind unfortunate past and move into future”.

Trump and Kim are currently holding a meeting at “Freedom House” at DMZ. It has been 45 minutes and the meeting is continuing.

This marks the third summit between the two leaders who seek to seal a deal on denuclearization of Korean peninsula and lifting of sanctions on North Korea.

The meeting between Kim and Trump is the first time that two leaders met face to face since the breakdown of denuclearization talks in Hanoi, Vietnam last February.

Journalists reporting from the spot said that it was unprecedented that no plan whatsoever was in place for the high-profile visit unlike past.

Trump had earlier announced on Twitter that he would like to “say hello” to Kim at the DMZ.

North Korea, for its part, termed Trump’s offer “interesting suggestion”, adding it did not receive a formal proposal for the meeting.

Earlier, four U.S. Presidents have visited the DMZ — a no-man’s land — which divided North and South Koreas since 1950s’ war. DMZ — the divided line between Koreas — is about 250 kilometers long and 4 km wide. It is one of the world’s most heavily fortified borders since 1950s.

The rival Koreas are technically in a state of war since then as the Korean War ended in a truce, not a peace treaty.

The two leaders first met in a historical summit held on June 12, 2018 in Singapore, where they discussed the nuclear disarmament of North Korea and having a lasting peace between countries.

The second summit took place in Hanoi city of Vietnam late February; however, it quickly ended without bearing any fruits.

Later, Trump said talks were not concluded as North Korean leader demanded all sanctions are lifted and the U.S. was not willing to do so.

Trump has been claiming victory in his diplomatic overtures with North Korea saying Pyongyang did not hold any further nuclear tests ever since he started talks with Kim.

The meeting between Trump and Kim comes after U.S. special representative for North Korea Stephen Biegun said in South Korea last Friday that Washington was “ready to hold talks with North Korea to move their denuclearization negotiations forward in a simultaneous and parallel manner”.

All of the previous four presidents wore dark windbreaker jackets when they visited the DMZ.