U.K. Lawmakers Vote Against Leaving EU Without a Deal

Britain’s Prime Minister Theresa May listening to a debate in the House of Commons on Wednesday before the vote on a ‘no-deal’ Brexit. LONDON—British... 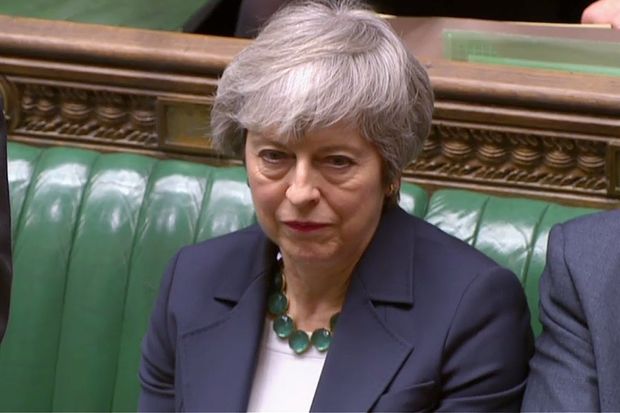 Britain’s Prime Minister Theresa May listening to a debate in the House of Commons on Wednesday before the vote on a ‘no-deal’ Brexit.

The surprise decision, coming a day after Parliament resoundingly rejected for a second time the deal the prime minister negotiated with the EU laying out conditions for the country’s orderly separation from its biggest trading partner, underlined that Mrs. May has largely lost her grip on the Brexit process.

“In the last 24 hours Parliament has now rejected both her deal and no deal,” said Jeremy Corbyn, leader of the main opposition Labour Party. “Parliament must now take control of the situation.”

Despite Wednesday’s vote, under U.K. and EU law the U.K. is still slated to leave the EU on March 29, unless both sides agree to an extension. Mrs. May urged Parliament to figure out what it wants.

“The onus is now on every one of us in this House to find out what that is,” she said.

After Tuesday’s defeat, Mrs. May said she would put a vote before Parliament over whether to rule out a no-deal exit on the currently planned date of March 29. That would have postponed—but not eliminated—the possibility that the U.K. leaves the EU without a deal.

But lawmakers seized on an amendment to Mrs. May’s proposal in an effort to rule out altogether the prospect of a no-deal exit, and passed it by 312 votes to 308. The amendment’s original Conservative sponsor had withdrawn it after the government ordered its rank-and-file lawmakers to oppose it. But the measure was picked up by a co-signatory from the main opposition Labour Party and the vote was allowed.

A final vote showed an even bigger majority of 321 votes to 278 against a no-deal exit.

The outcome likely eliminates the prospect of a chaotic U.K. departure from the bloc that many businesses have depicted as a worst-case scenario for the country’s economy.

While the vote makes it much less likely that Britain will leave the bloc without a departure agreement, technically that outcome can’t yet be entirely ruled out. Other EU countries must first agree to delay Britain’s departure beyond March 29, and then a deal must be reached and ratified before the new deadline.

Wednesday’s political drama played out in an almost surreal and often farcical atmosphere in the House of Commons. Mrs. May and her cabinet colleagues spent the afternoon warning their parliamentary colleagues against the folly of leaving the EU without a deal as they spoke in support of the government’s motion.

But after the motion was amended to rule out a no-deal exit in any circumstance, Mrs. May was forced to vote against her own motion and to instruct her supporters to do the same. Not all obeyed, and some members of her cabinet didn’t vote. Seventeen Conservative lawmakers voted for the amended motion, prompting some pro-Brexit lawmakers to claim that their colleagues had betrayed the result of the 2016 referendum to leave the EU.

Despite the rebellion by lawmakers, Mrs. May appeared to double down on her deal, advancing a motion saying the government would ask for an extension until the end of June—but only if a deal was passed. That makes it likely lawmakers will be asked to reconsider her twice-rejected deal as soon as next week, ahead of a planned meeting of European leaders.

In the short term, the vote may force some anti-EU hard-liners to fall in behind Mrs. May’s deal. That is because the longer Britain’s departure date is delayed, the more likely lawmakers are to force through an exit agreement with much closer ties to the EU than Mrs. May has envisioned—or even set up a second referendum on Brexit.

Lawmakers will now likely vote on Thursday in favor of a further proposal to request a delay in Britain’s scheduled exit date beyond March 29. That would require the unanimous approval of the other 27 EU governments.

Other member states are likely to agree to an extension during a summit in Brussels that starts on Thursday of next week. However, it isn’t clear what length of extension they would prefer and whether conditions would be imposed.

If a further vote on her deal fails, a longer delay now becomes much more likely. That could allow Parliament to force her into negotiating much closer ties to the bloc than the government wants, or even into providing the opportunity for a second referendum.

Earlier Wednesday, the government underlined that a no-deal Brexit was still in the cards by unveiling the tariff schedule the U.K. would apply temporarily to all imported goods in case of a sudden break from the EU.

In a proposal aimed at easing the pain for consumers, the U.K. trade ministry said on Wednesday it would eliminate tariffs on almost 90% of goods imported into the U.K. by value. But it also proposed tariffs protecting sensitive British industries, including car and ceramics manufacturers and meat producers, after which consumer prices would likely rise.

Currently, all goods from the EU enter the U.K. tariff-free, while goods from outside the EU carry a range of tariffs determined by the bloc.

The U.K. also said that in a no-deal scenario, it wouldn’t impose any checks or duties on goods imported into Northern Ireland, part of the U.K., over the politically sensitive border from the Republic of Ireland, an EU member state.

Treasury chief Philip Hammond, a close ally of Mrs. May, highlighted the potential economic benefits of a smooth and orderly exit in a regular budget update to Parliament Wednesday, saying the U.K. would experience a “deal dividend” that would spur growth and boost tax receipts.

“Last night’s vote leaves a cloud of uncertainty hanging over our economy. And our most urgent task in this House is to lift that uncertainty,” he said.

Write to Stephen Fidler at stephen.fidler@wsj.com and Jason Douglas at jason.douglas@wsj.com