Typhoon Hagibis, the worst storm to batter Japan in decades, left a trail of destruction in its wake, with mudslides and flooding over widespread...

Typhoon Hagibis, the worst storm to batter Japan in decades, left a trail of destruction in its wake, with mudslides and flooding over widespread areas.

As of last night, at least 30 people were confirmed dead across 11 prefectures, while another 15 were missing. At least 177 were injured in as many as 28 prefectures.

“I ask the people of Japan to remain vigilant against landslides and flooding rivers,” he said, as he pledged to “exert all-out efforts for the earliest recovery of blackouts, water outages and transportation services”.

Chief Cabinet Secretary Yoshihide Suga noted that the typhoon had caused “immense damage far and wide”. Government data showed that as many as 142 rivers had overflowed.

The bulk of the damage was felt to varying degrees in the 13 prefectures where the highest emergency heavy rain warning, on a five-point scale, was triggered last Saturday.

The alert was first sounded in Tokyo, Kanagawa, Saitama, Gunma, Yamanashi, Shizuoka and Nagano, before being extended to Ibaraki, Tochigi, Fukushima, Miyagi and Niigata, and then to Iwate overnight.

While this warning was not raised in Chiba, strong gusts flipped over a mini truck, killing one, and blew the roofs off several homes.

The storm brought the Greater Tokyo region – the world’s most populous metropolitan area – to a standstill last Saturday. 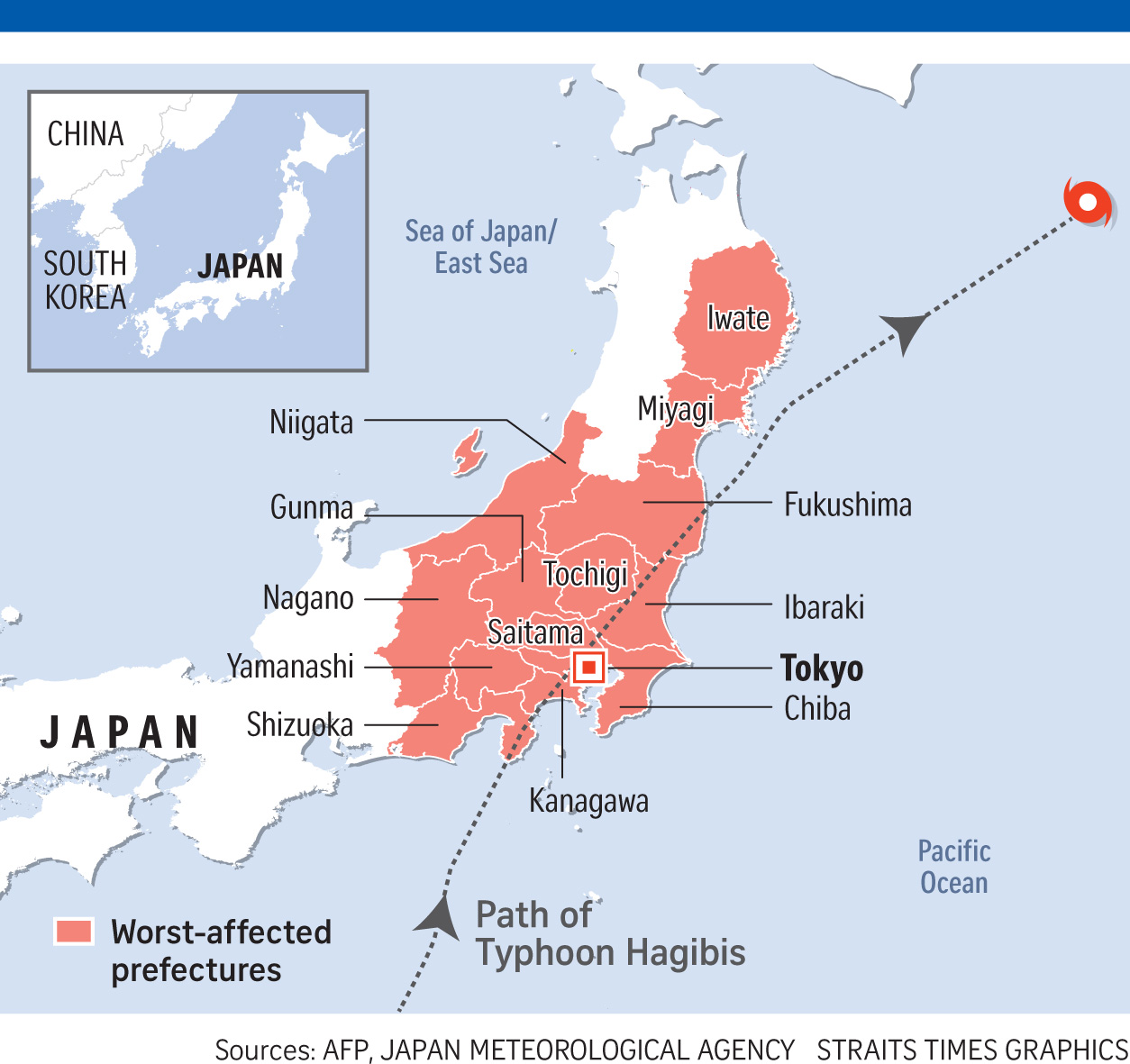 People bracing themselves for the storm largely heeded official calls to seek safety. Supplies were wiped out at many supermarkets and hardware stores, while train services were suspended, and malls and restaurants shuttered.

As a result, the damage was largely contained in central Tokyo, where the subway was up and running by early yesterday morning and stores were quickly reopened.

The same, however, cannot be said of the less cosmopolitan areas of Japan, which are more vulnerable to disasters. Both Chikuma River in Nagano and Abukuma River in Fukushima burst their banks, flooding wide areas with muddy waters at least two storeys deep.

Trapped residents – some cradling their children – had to be airlifted from their roofs by military helicopters.

But the operation went awry in one case, in Iwaki in Fukushima, where a 77-year-old woman fell 40m to her death after rescuers failed to properly attach a harness before airlifting her.

Also in Fukushima, the heavy rain triggered irregular readings at the crippled Fukushima Daiichi nuclear plant. In Nagano, 10 bullet trains on the Hokuriku Shinkansen Line, which connects Tokyo and Kanazawa, were under water.

In mountainous Gunma, Nagano and Fukushima, rescue workers were ploughing through landslide debris in hopes of finding survivors.

Flooding and landslides were also reported at the popular tourist spot Hakone, a hot springs town in Kanagawa prefecture, which was battered with 939.5mm of rain over 24 hours – a new record.

Over at Tokyo Bay, an anchored 1,925-ton Panama cargo ship sank in the violent storm, throwing its 12 crew members – seven Chinese, three Myanmar nationals, and two Vietnamese – into the sea. As of last night, five were confirmed dead while three were still missing. The other four are safe.

The typhoon knocked out power to about half a million homes at its peak, although electricity is slowly being restored. Around 166,220 households were without power as at 5pm local time yesterday, government data showed, while the taps are dry in 120,000 homes.

More than 800 domestic and international flights at Tokyo’s Narita and Haneda airports were cancelled yesterday, but flights are expected to return to normal today.

A Rugby World Cup clash between Namibia and Canada in Kamaishi in Iwate prefecture was cancelled yesterday, after two matches were shelved last Saturday.

Typhoon Hagibis, which means “speed” in Tagalog, made landfall on Izu Peninsula in Shizuoka just before 7pm last Saturday evening. It headed out to the Pacific Ocean early yesterday morning, leaving behind cloudless skies and unseasonably warm temperatures.