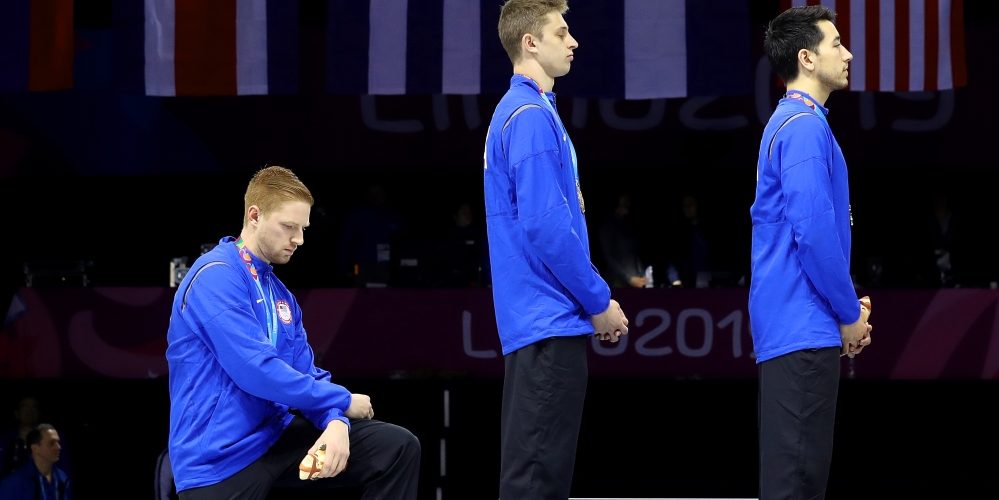 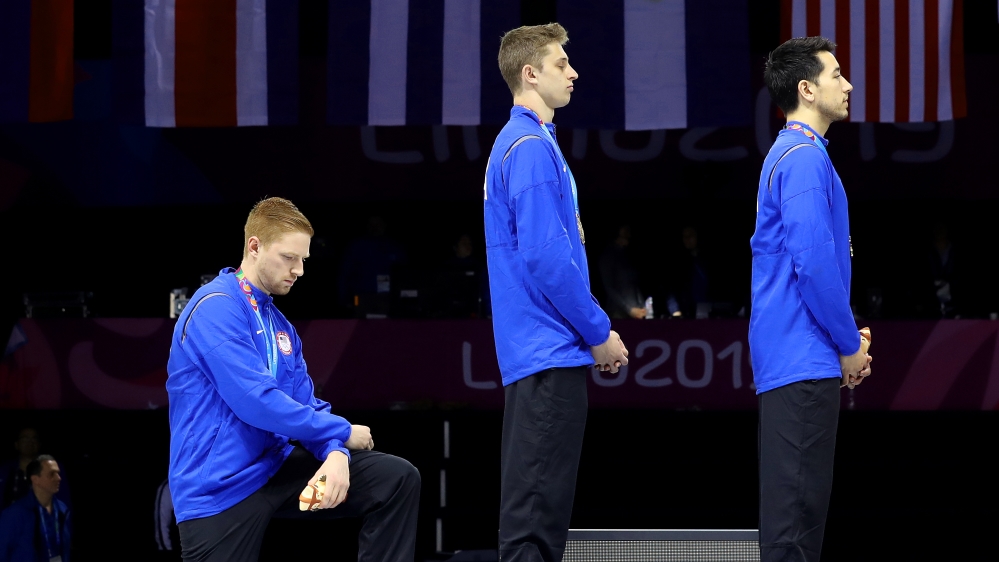 Two US athletes face possible disciplinary action for using their medal-winning moments at the multi-sport Pan American Games in Peru‘s capital, Lima, to draw attention to social issues back home.

Gold medal-winning fencer Race Imboden took a knee during his awards presentation on Friday to protest “multiple shortcomings” of the United States, while hammer thrower Gwen Berry raised her fist on Saturday as the US national anthem played following her gold medal-winning effort.

On Sunday, the US Olympic Paralympic Committee (USOPC) said in a statement that its leadership is reviewing possible consequences.

“Every athlete competing at the 2019 Pan American Games commits to terms of eligibility, including to refrain from demonstrations that are political in nature,” the USOPC said.

“In these cases, the athletes didn’t adhere to the commitment they made to the organising committee and the USOPC. We respect their rights to express their viewpoints, but we are disappointed that they chose not to honour their commitment.”

Imboden, who took home the gold medal in the men’s foil team event, posted a tweet after the ceremony: “I chose to sacrifice my moment today at the top of the podium to call attention to issues that I believe need to be addressed.”

According to Imboden, “racism, gun control, mistreatment of immigrants, and a president who spreads hate are at the top of a long list” of problems in the US.

and a president who spreads hate are at the top of a long list.
I chose to sacrifie my moment today at the top of the podium to call attention to issues that I believe need to be addressed. I encourage others to please use your platforms for empowerment and change.

Meanwhile, Berry also called out US President Donald Trump, saying he is “making it worse”.

The protests have split opinions with some pointing to an athlete’s right to free speech while others say the medal podium at an international competition is no place for politics.

“One thing that makes the US great is that we have this ability to have freedom in a lot of different things, it is a founding principle in our country – freedom of speech, freedom of religion,” US softball gold medallist Monica Abbott said during the Games’ closing news conference on Sunday.

“But as an athlete, it is our opportunity to put differences aside whether they’re political, they’re athletic, to whether it is the way we look to put those aside to celebrate something that can bring the world together,” she said.

For decades, athletes, particularly African Americans, have used professional sports as a platform to highlight social and political issues.

In an iconic silent protest at the 1968 Summer Olympics, American sprinters John Carlos and Tommie Smith raised black-gloved fists and bowed their heads to signal black power and black unity in the US.

The issues have not changed much in the ensuing 50 years.

Quarterback Colin Kaepernick has been out of a job since he knelt during the national anthem before the San Francisco 49ers game in 2016 to protest police brutality and social injustice.

Since then, athletes representing the US have faced scrutiny about what, if any, signs of protest they might show if they land on the podium at an Olympics or any other major sporting event.

Among the issues that have been fodder for possible protests have been race relations, the treatment of the LGBT community, social injustice and disagreements with Trump.