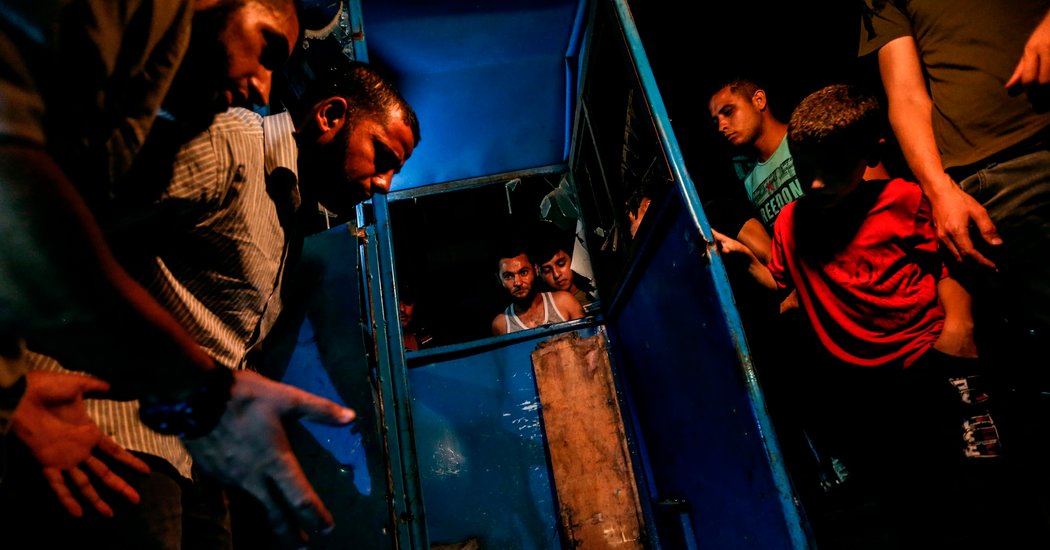 GAZA — Two explosions that ripped through Hamas police checkpoints in Gaza City late Tuesday killed three police officers, security officials said on Wednesday, in an uncommon attack believed to have been carried by forces within the territory.

Two of the officers were part of the armed wing of Hamas, the Islamist militant group that governs Gaza. The group has been mostly engaged in cross-border clashes with the Israeli military. But at times it has faced internal opposition from more stringent Islamist militants aligned with Al Qaeda or the Islamic State.

“The sinful hands that carried out this crime will not escape punishment,” Mr. Al-Bozom was quoted as saying by Reuters.

Several reports, citing security officials, said the blasts, which also injured three civilians, were believed to have been the work of suicide bombers aligned with the Islamic State group, but that information could not be independently verified. Other officials said they believed the attackers were either Islamic State members or collaborators with Israel.

Fawzi Barhoum, a Hamas spokesman, said the attacks “only serve” Israel, describing them as “suspicious bombings” that harmed the armed struggle against Israel.

A spokesman for the Israeli military said he knew of no involvement by Israel in the blasts.

The attack left body parts strewn over the site and puddles of blood covering the ground. Police officers and masked forces from the military wing of Hamas were deployed to the explosion site, blocking roads and imposing traffic controls.

The first blast destroyed a motorcycle as it passed a police checkpoint, witnesses said, according to Reuters. Two police officers were killed and a third Palestinian wounded. It was not immediately clear whether the riders were among the casualties.

The second explosion, less than an hour later, killed one officer and wounded at least two other people at a police checkpoint elsewhere in the city, the Interior Ministry said.

Tensions have been high for several years between Hamas and the Islamic State branch in Sinai, which is fighting the Egyptian military in the area. The Islamic State fighters subscribe to a Salafist ideology that is at odds with the more pragmatic approach of Hamas, which is rooted in the Muslim Brotherhood of Egypt.

Islamic State fighters see themselves as part of a global jihadist movement, while Hamas is part of the Palestinian resistance to Israel. On the ground, the two groups have had violent clashes and political disagreements, most notably over Hamas’s relations with Egypt and control of smuggling tunnels on the border between Egypt and Gaza.

Islamic State commanders, in turn, have criticized Hamas for engaging in talks with Egypt over control of the border between Egypt and Gaza, and have publicly invited Hamas members to defect to their group.

In July 2017, jihadists allied with Islamic State in Sinai participated in an attack on Egyptian security forces in Sinai. That came a year after the Islamic State had tried to scupper talks between Hamas and Egypt by closing off smuggling tunnels between Sinai and Gaza.

Hamas, which took over Gaza after a 2007 civil war with the forces of President Mahmoud Abbas, has clashed with the Israeli miliary as it seeks a loosening of the Israeli blockade of Gaza.

A series of violent clashes and cease-fires has unfolded between the group and the Israeli military. In May, in some of the worst fighting in years, Palestinian militants launched about 250 rockets and mortar shells into southern Israel, and the Israeli military responded with airstrikes and tank fire against targets across the Palestinian territory

More than two dozen people — at least 22 Palestinians and four Israeli civilians — were killed, and homes and businesses were destroyed, in the fighting.

In March, Israel and Hamas exchanged rocket fire, with one striking the village of Mishmeret, about 20 miles north of Tel Aviv, the Israeli military said. Hamas neither confirmed nor denied that it had carried out the attack. Hours later, Israeli warplanes struck back at Hamas targets throughout the Gaza Strip.