ISTANBUL — President Recep Tayyip Erdogan of Turkey warned Western nations that he would continue to release people who were thought to be members... 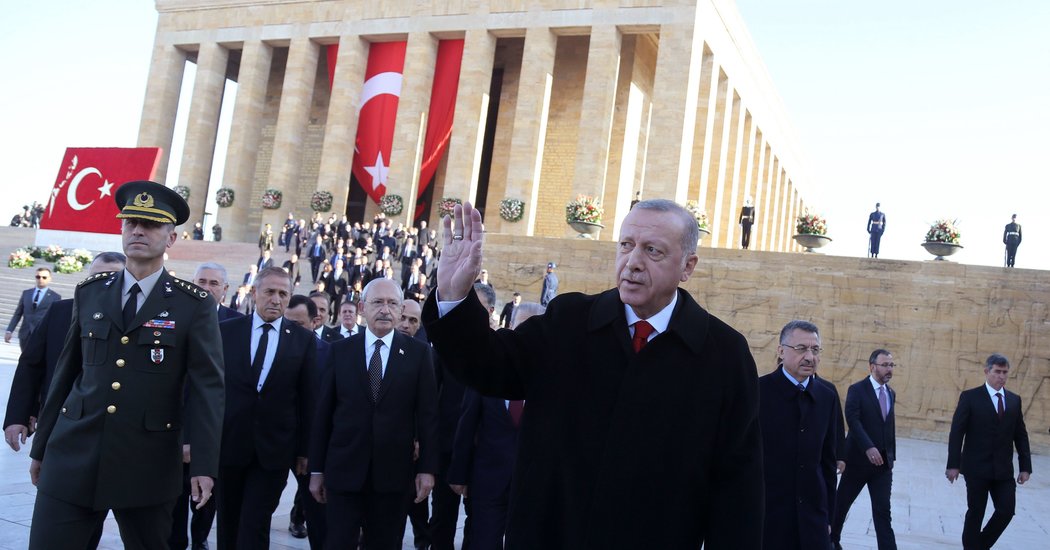 ISTANBUL — President Recep Tayyip Erdogan of Turkey warned Western nations that he would continue to release people who were thought to be members of the Islamic State and send them back to their home countries if governments continued to pressure Turkey with sanctions.

Speaking to reporters on Tuesday shortly before leaving Ankara for a visit to the United States, Mr. Erdogan was mostly aiming the remarks at the European Union, which has proposed a system for imposing sanctions on Turkey over its unauthorized gas drilling in the eastern Mediterranean.

The comments came a day after Turkey said it had begun deporting Islamic State fighters it had captured, starting a program to repatriate the detainees that has strained ties with European countries.

Mr. Erdogan also took a tough line toward an American detainee who was deported by the Turkish authorities on Monday and became stranded at the Greek-Turkish border after being turned back by the Greek border police. Turkish officials said on Monday that the American, who has not been identified, is an Islamic State fighter who was captured last month in northeastern Syria.

“We have started returning Daesh members to their countries and of course there is a serious rush, things are flaring up,” Mr. Erdogan told reporters, using the Arabic acronym for the Islamic State. He added that the onus had been on Turkey to handle the exodus of Islamic State fighters from Syria, and that now their home countries must decide what to do.

“It does not concern us if they are stuck at the border or not,” Mr. Erdogan said, referring to the American detainee. “We will continue sending them, so if they take them or do not take them doesn’t really concern us.”

According to a statement by the Greek police, the man was escorted to a Greek border post on Monday by Turkish officers who cited the expiration of his visa. The man, however, said he did not wish to enter Greece and was sent back to Turkey, the police said.

Later in the day, the man returned alone to the Greek border post and asked to enter Greece, but he was turned back by Greek border guards.

Turkish news outlets aired images of the man waving at the camera from the buffer zone between the two countries. But he is just one of several people whom Turkey has vowed to deport, citing suspected ties to the Islamic State. The procedures to deport 11 French citizens and seven Germans, along with others from Denmark and Ireland, began this week, according to the Turkish Interior Ministry.

The French citizens are four women and seven children, according to French news reports.

Five of the children are younger than 4, according to their lawyer, Marie Dosé, who said the women had asked for years to be repatriated and wanted to be tried in France.

“They have risked their lives and their children’s to join Turkey and be expelled to France,” Ms. Dosé said.

Three of the women escaped last month from the Ain Issa camp in northeastern Syria after the facility was abandoned by Kurdish forces. The women fled to the Turkish border, 25 miles north, and were under an international arrest warrant, according to Ms. Dosé.

It is not the first time that French citizens have been deported from Turkey. Hundreds of Islamic State fighters and their families have been returned to France since the countries signed an agreement in 2014.

In September, Turkey deported three women and nine children, including the niece of Fabien and Jean-Michel Clain, two high-profile jihadists who were reportedly killed in Syria in February.

Mr. Erdogan’s threats to continue releasing Islamic State prisoners and also to open the gates to Europe more generally for Syrian refugees have caused alarm in Europe, the Turkish leader will face different pressures on his visit to the United States.

He is scheduled to meet President Trump in Washington on Wednesday. At the top of the agenda will be Turkey’s purchase of the Russian S400 defense missile system. American officials have pressed Turkey to walk away from the Russian system or face a raft of sanctions.

Mr. Erdogan had initially floated the idea of buying the American-made Patriot missile system as well, but it is not clear if the move would be enough to avoid sanctions.

Mr. Erdogan told Turkish reporters on Tuesday that he would again raise his longstanding demand for the extradition of Fethullah Gulen, an Islamic preacher whom Mr. Erdogan has accused of instigating a failed coup.

The Turkish president will also continue to press complaints against the American support of a Kurdish militia in Syria that Turkey considers a terrorist organization.