IDIL, Turkey — A Syrian protester was killed Friday after a Turkish military vehicle ran him over as it drove through an angry crowd... 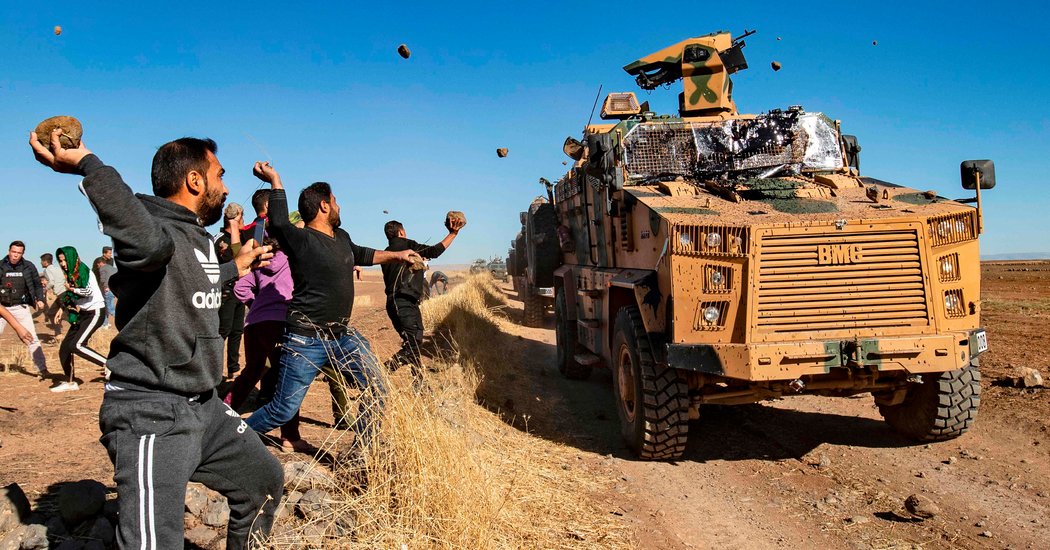 IDIL, Turkey — A Syrian protester was killed Friday after a Turkish military vehicle ran him over as it drove through an angry crowd of protesters, Kurdish forces and a Syria war monitoring group said.

The death reflects the increasingly complicated situation in northern Syria in the wake of the American decision to pull its troops away from the Turkish border. The decision was followed by a Turkish invasion and a deal between Turkey and Russia to jointly patrol a strip of northeastern Syria along the Turkish border.

Many of the region’s Kurdish residents oppose the Turkish invasion and the patrols, which they say amount to ethnic cleansing of Kurdish-populated border areas.

The man killed Friday was among a group of residents who had chased and pelted a joint Russian-Turkey convoy with shoes and stones, prompting Turkish troops to fire tear gas to disperse the protesters.

Ten people were hospitalized, according to the Rojava Information Center, an activist group in Kurdish-held areas.

The Syrian Observatory for Human Rights, a war monitoring group, said the man was run over in the village of Sarmasakh by a Turkish vehicle that was conducting a joint patrol with the Russians — the third such patrol under a cease-fire deal brokered by Moscow.

Videos circulating online Friday show a group of men running after the Turkish-Russian vehicles, throwing stones at them. A man is seen trying to mount one of the vehicles and then men can be heard shouting, apparently after the man is run over.

Other videos from the area show men, women and children pelting armored vehicles as they drive near a cemetery before speeding away.

The Turkish Defense Ministry said the joint patrol from the Syrian city of Qamishli to the town of Derik “has been completed as planned with due care and attention to the safety of our personnel and the public against the provocateurs.” It said the patrols were being supported by drones.

There was no immediate comment from the Russian military about the incident.

The agreement with Russia — and a separate one with the United States — halted the Turkish invasion of Syria last month but fighting continues on the edges of the area now controlled by Turkey.

Nearly 200,000 people have been displaced by the fighting since Turkey invaded last month, and, according to the United Nations, 92 civilians have died.