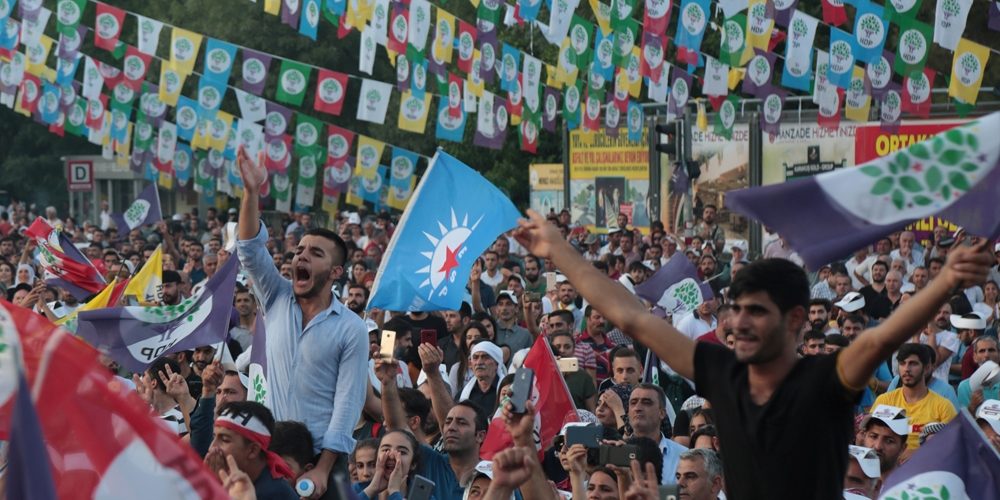 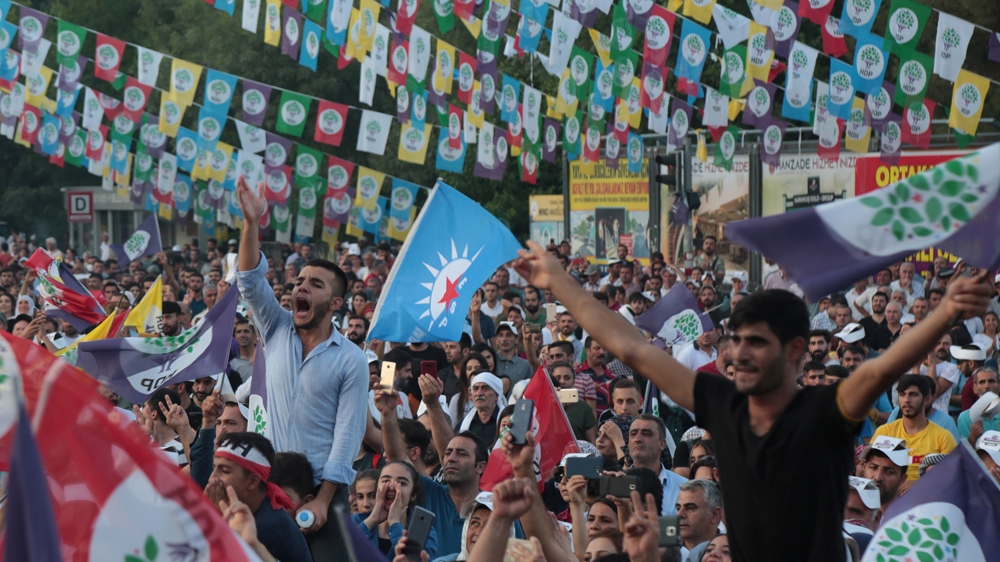 The Turkish government has long accused pro-Kurdish HDP of having links to the outlawed PKK [File: Sertac Kayar/Reuters]

The Turkish government has removed three mayors from office over alleged links to a Kurdish armed group as the government arrests more than 400 people amid a deepening crackdown on the opposition.

The mayors of Diyarbakir, Mardin and Van provinces in eastern Turkey – all members of the People’s Democratic Party (HDP) elected in March – were suspended on Monday.

The Ministry of the Interior said it had active cases against them for “spreading propaganda” or being members of a “terrorist” organisation.

Al Jazeera’s Sinem Koseoglu, reporting from Istanbul, said the mayors have also been accused of diverting money and resources from their municipalities to support the outlawed Kurdistan Workers’ Party (PKK) agenda.

President Recep Tayyip Erdogan has repeatedly claimed that the HDP has ties to the PKK, which has fought a bloody revolution against the Turkish state for much of the past 35 years.

The PKK is designated as a “terrorist” organisation by Turkey, the United States and the European Union.

Erdogan had warned ahead of nationwide local elections in March that elected officials would be removed if they were found to have connections to the PKK.

The Ministry of the Interior said the mayors’ roles would be taken over by their provincial governors, who are appointed by the central government.

Diyarbakir Mayor Selcuk Mizrakli told reporters outside the municipal building that the move “disregards the will of the people”.

The cases against Mizrakli and Van Mayor Bedia Ozgokce Ertan date back to their time as members of parliament.

The Ministry of the Interior in a statement accused the mayors of supporting the PKK through their actions and behaviour “rather than meeting the needs of citizens”.

The HDP denies any links to the PKK but has tried to broker peace talks between the fighters and the government.

Hundreds of its members and around 40 of its mayors are currently in detention.

The former HDP head, Selahattin Demirtas, has been in prison since November 2016 – a case that has been criticised by the European Court of Human Rights.

Our Municipal Co-chairs, who were elected with 63% of the vote in Diyarbakır, 56% of the vote in Mardin and 53% of the vote in Van, have been removed from duty with an Interior Ministry order based on lies. Statement by our central executive board: https://t.co/gBbLhnFUQ3

The government launched a crackdown on opposition politicians as well as the public sector, media and civil society following a failed coup in July 2016.

Although the coup was not directly linked to the Kurdish issue, the crackdown saw 95 of the 102 pro-Kurdish mayors removed from their posts and replaced with central government appointees.

HDP legislator Garo Paylan said on Monday that all parties and the public must oppose this “vile coup”.

“Remaining silent will mean Ankara, Istanbul next,” he said on Twitter, referring to the fact that the ruling party lost control of Turkey’s two largest cities this year.

In Diyarbakir, the municipality building was cordoned off by police, a correspondent from AFP news agency said, with employees being searched by officers as they entered.

The sacked mayors had won with large majorities in the elections held in March.

Mizrakli won in Diyarbakir with 63 percent of the vote, Turk won in Mardin with 56 percent and Ertan took Van with 54 percent.

The HDP said in a statement that the decision was “clearly a hostile move” against the Kurds and called for solidarity between all “democratic forces”.

There was also criticism from the new Istanbul mayor, Ekrem Imamoglu of the main opposition Republican People’s Party (CHP), who was forced to rerun his own campaign this year after being controversially stripped of his initial victory.

“Ignoring the will of the people is unacceptable,” Imamoglu wrote on Twitter.