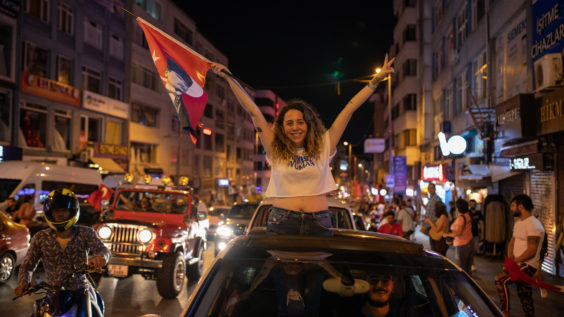 [Istanbul] Turkey’s secular opposition is celebrating a rare and stunning second victory over Turkish President Recep Tayyip Erdogan in the Istanbul mayoral elections in what is one of the worst defeats he has faced since coming to power.

Tens of thousands of supporters of Republican People’s Party (CHP) candidate Ekrem Imamoğlu took to the streets following an announcement of the election results, dancing, singing and setting off fireworks.

“We are happy…. Everything will be good,” said one man driving a car near Imamoğlu’s campaign headquarters while his friends waved flags from the windows.

Dozens of other people drove by, all honking their horns in celebration.

Imamoğlu was ahead by over 800,000 votes – nearly nine percent – against his competitor, Binali Yildirim, a former prime minister and a close ally of Erdogan in their pro-Islamist AK Party (AKP).

The results of the initial March 31 election were nullified by the country’s national election committee after Imamoğlu, a relatively unknown politician, defeated Yildirim by an ultra-slim margin: 48.80% to 48.55%.

Erdogan’s AKP claimed widespread irregularities in that round, insisting, for example, that people working on the election were not civil servants, as required by law. Erdogan himself alleged that there had been connections to organized crime.

After declaring his second victory in the late hours of Sunday night, Imamoğlu went to greet supporters in the outlying Istanbul district of Beylikdüzü, which he formerly represented at City Hall.

One man yelled out Imamoğlu’s campaign slogan, “Everything will be fine,” as a crowd around him cheered and another supporter came over to give him a high-five.

It was Imamoğlu’s effective but low-key governance in Beylikdüzü that led him to become the CHP mayoral candidate for Istanbul.

His second mayoral victory in less than three months is being attributed to the fact that he stuck to a positive message rather than fighting Erdogan, embracing even the president’s supporters, a party communications strategist told The Media Line.

“We have a strategy called ‘radical love,’ and Mr. Imamoğlu has successfully implemented [it],” the CHP strategist said.

The mayor-elect emphasized a message of cooperation during his victory speech, saying he wanted to work with Erdogan. He also thanked everyone who came out to vote in a peaceful manner – and not just his own supporters.

“In this city today, you have fixed democracy. Thank you Istanbul,” he said, according the Reuters news agency.

In the first campaign, Imamoğlu’s inclusive campaigning was in direct contrast to Erdogan’s strong, nationalistic and often negative tone. The Turkish president took a back seat for most of the rerun campaign, but near the end became more vocal. He was not able to sway the peoples’ vote and they punished him severely for choosing to pressure the election committee to cancel the March 31 results, which gave Imamoğlu a majority of just 13,000 votes.

The AKP or a predecessor had been in control of Istanbul, the economic hub of the country, for about 25 years.

Sinan Ulgen, chairman of the Edam Center for Economics and Foreign Policy Studies think tank, told The Media Line that Erdogan’s demand for a rerun emitted a sense of injustice even among his supporters, and clearly backfired.

Imamoğlu, he added, was able to bring in support from people beyond his own party who were disenchanted with the AKP.

“Imamoğlu has been a good candidate. He ran a relatively effective campaign that consolidated even more with the opposition votes… That’s how Imamoğlu won against Binali Yildirim,” said Ulgen.

The mayor-elect was also helped by the struggling economy, which many blame on Erdogan. The president’s choice of his son-in-law as finance minister last year rattled investors, but it was a diplomatic row with the US that delivered the largest blow to the Turkish lira, which went into freefall last year and lost nearly 30% of its value, which led to rising prices felt across the country and the political spectrum.

The lira strengthened after the latest election results.

Nicholas Danforth, a Turkey-based visiting fellow at the German Marshall Fund of the United States, told The Media Line that Imamoğlu’s victory demonstrates the desire of Turkish citizens for some level of democracy.

“It shows that Turkish voters are going to react negatively to having outcomes of elections interfered with [and] Imamoğlu’s voters clearly didn’t take kindly to the government’s attempt to reverse the outcome of an election,” Danforth said. “The fact the government at least initially accepted this result shows that they recognize… the political cost – maybe.”

Despite the CHP candidate’s decisive win in Istanbul, power in the country still rests mostly with Erdogan, whom critics accuse of moving Turkey away from democratic norms.

The Edam Center’s Ulgen says the very fact that a rerun election took place after pressure from Erdogan and his party raises questions about Turkey’s state of democracy.

“It also sends a signal that Turkey’s institutions such as the high electoral board remain under the influence of the government’s authority,” he added.

It remains to be seen how much space the Turkish president will give Imamoğlu to govern the city – where the president’s AKP has a majority on the municipal council.

He will have reason to want to limit the new mayor’s quick rise to political fame: Imamoğlu is already being touted as a future contender for the presidency.