Turkey is among the top five summer holiday destinations for Europeans in 2019, according to TUI Group which analyses holiday bookings with Europe’s largest...

Turkey is among the top five summer holiday destinations for Europeans in 2019, according to TUI Group which analyses holiday bookings with Europe’s largest travel group.

In 2019, Spain remains the top of the list for summer holiday among European tourists, closely followed by Greece.

Turkey is the third most visited destination while Italy and Cyprus Island are fourth and fifth of the list.

Moreover, the report emphasised that Turkey enjoyed the highest increase in the number of incoming tourists among the top five countries.

Turkey’s southern coastal city of Antalya, in particular, is experiencing a tourism boom this summer. 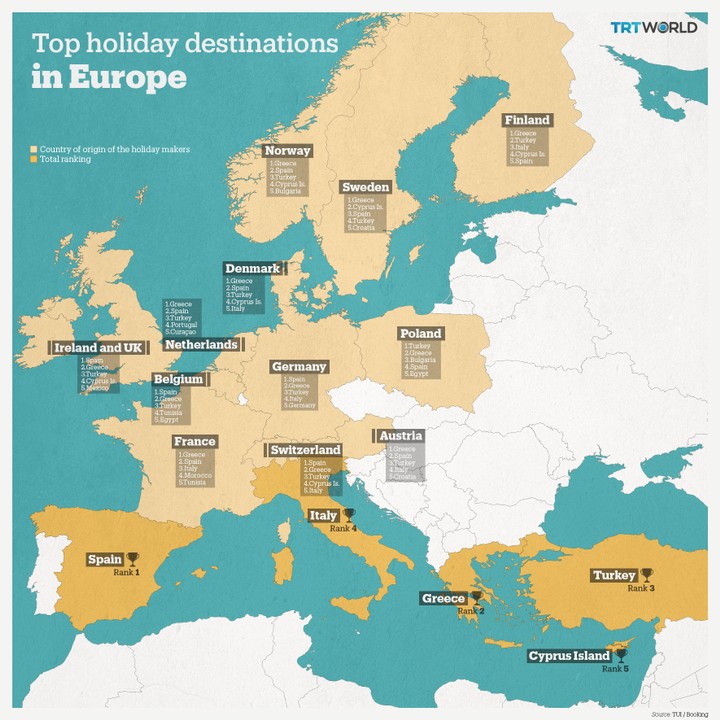 The map shows top summer holiday destinations in Europe, according to TUI Group. (TRTWorld)
More than 95,000 tourists arrived in Antalya by plane on July 13 alone, marking a record for arrivals in a day to the city.

From the beginning of the year to July 13, more than 6.6 million visitors came to Antalya which marked a 16 percent increase on the same period, the previous year.

Turkey’s beaches, especially in the Mediterranean region, are one of the most popular destinations in all of Europe.

The number of tourists coming to Turkey has gone up to more than 45 million in 2018, including Turkish nationals who live in other countries.

Last year marked a record for the country’s tourism sector.

Officials expect to break a new record in the number of arrivals this year.

Turkish Culture and Tourism minister Mehmet Nuri Ersoy said in January that the ministry was working to end the ‘season’ concept in tourism.

Vocational schools for tourism and hospitality sector will be active and effective year around. The concept of ‘seasonal tourism’ is ending, employees will work year around, he said.