Analysts told The Media Line Turkey is trying to maintain a presence in northern Syria to prevent a Russian-back attack on Idlib by the... 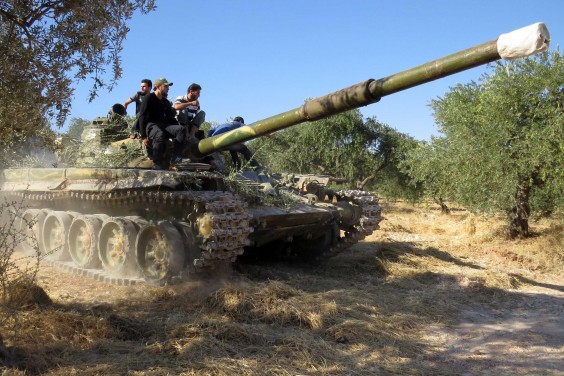 Turkey’s foreign minister warned the Syrian regime on Tuesday that it shouldn’t “play with fire” after a Turkish military convoy was hit by a fatal air strike in Syria. Analysts told The Media Line that it could lead to a greater risk of a serious direct confrontation.

The minister’s comment came one day after his government announced that three civilians were killed and 12 wounded in the air strike in northwestern Syria.

“The regime needs to not play with fire. We will do whatever it takes to secure our troops,” Turkish Foreign Minister Mevlut Cavusoglu stated on Tuesday, according to state media, which described the convoy as a transfer of troops to an observation point in Idlib which has been facing attacks by the Russia-backed Syrian regime. The Turkish foreign minister also stated on Tuesday that the observation point, which was meant to protect civilians and maintain supply routes, will not be moved.

Aykan Erdemir, a senior fellow at the Foundation for Defense of Democracies and former parliamentarian with the main opposition CHP, stated that while Assad seems to be avoiding a direct clash with Turkish troops, this might not always be the case.

“If the Syrian Arab Army continues to win new ground in Khan Sheikhoun, there could be increased risk of clashes between Turkish and Syrian troops, forcing Moscow to intervene to deescalate the crisis,” Erdemir wrote in an email to The Media Line.

The northwestern region, including Idlib province, is the last major stronghold for rebels. It is also home to millions of internally displaced Syrians who could flee towards the Turkish border if there was a severe escalation in fighting.

That would put major domestic pressure on Erdogan. His party’s major defeat in a June election for mayor of Istanbul was partly blamed on Turkish resentment towards Syrians.

In response, the government has told Syrians not registered in Istanbul they have until Tuesday to leave.

But authorities have already started checking people’s identity cards and detaining those without proper paperwork.

While the government says it is not sending people back to Syria, there are reports of deportations to the war-torn country.

Turkey has more displaced Syrians than any other country, with over 3.5 million.

A Russian-backed Syrian regime attack on Idlib would put in peril the developing relationship Ankara has with Moscow, at the same time that relations with the United States have been worsening, especially after Turkey went through with a major arms deal with Russia.

“Where Turkey has sought to balance Russia and America in pursuit of a more independent foreign policy, it now appears to be at odds with both powers in Syria,” Nicholas Danforth, a visiting fellow at the German Marshall Fund in Turkey wrote in a statement to The Media Line.

Kristian Brakel, the Turkey country director for the German-based Heinrich Boll Foundation, told The Media Line that Turkey likely wants to increase personnel around Idlib in order to discourage an attack on the region.

“[It’s] an attempt to signal to Russia and Syria that they can’t retake Idlib.”

However, such moves come with risks, as the Monday air strike showed.

“There could be direct confrontation, that’s for sure,” Brakel said.

He added that an agreement between Turkey and the United States to begin steps to create a safe zone in northern Syria, which has so far stopped an incursion by Ankara, has led Turkey to look to Idlib to maintain a presence in the area.

Turkey says it wants to push the Kurdish militia YPG, which is allied with the U.S., away from the Turkish-Syrian border to avoid attacks into Turkey or sending weapons across the border.

Analysts state that Turkey’s aim is to avoid a Kurdish or YPG-aligned autonomous state develop within Syria over fears it could lead to land claims within Turkey.

According to Turkey, the YPG is connected to the Kurdish militia in Turkey, the Kurdistan Workers Party (PKK), which is classified as a terrorist organization by Ankara, Washington and the European Union.

“What Turks want is to maintain a foothold in northern Syria,” Brakel said.