Turkey Finds Ally in Hungary as Both Move Closer to Russia

Analysts say warming in ties highlights divisions within NATO military alliance The increasingly strong relationship between Turkey and Hungary as they move closer to... 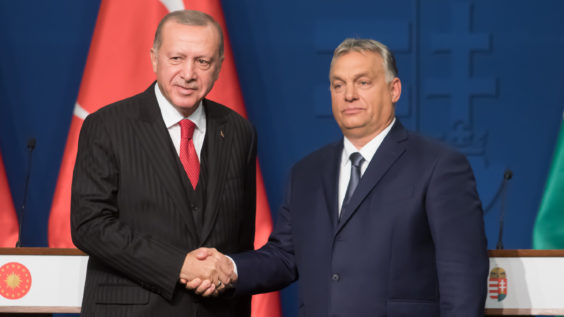 The increasingly strong relationship between Turkey and Hungary as they move closer to Russia could contribute to a fracturing of NATO, analysts have told The Media Line.

The two men are leaders of NATO-member states and have pushed their countries toward authoritarianism, frequently getting into rows with their European allies. They are also moving closer to Russian President Vladimir Putin, who met with Orban in the Hungarian capital a week before Erdogan’s visit.

Kerim Has, a Moscow-based political analyst focusing on Russia and Turkey, told The Media Line he believes Moscow might be pushing Turkey and Hungary to strengthen their ties.

“Ideologically, [the] political styles of Orban and Erdogan and Putin are a kind of reason to have close ties. So there are some political motivations in them that force all of the sides to have close relations,” Has said.

“I do not exclude the possibility that Russia supports [the] Turkish side to build closer ties with Hungary,” he added.

Both countries have made multi-billion-dollar deals with the Kremlin. Turkey purchased an anti-missile defense system, the S-400, while Hungary has a deal with Moscow to expand a nuclear energy plant.

Both are taking part in the Turkstream pipeline project, which Russia uses to send its natural gas to Turkey and countries in Eastern Europe, including Hungary. The pipeline allows Russia to avoid Ukraine.

“It shows that there are some NATO countries that are in a less loyal club,” Kreko told The Media Line, adding that Orban himself highlighted the disunity of both NATO and the European Union with his veto of an EU resolution condemning Turkey’s October 9 incursion into northeastern Syria.

“That is a highly divisible line within NATO itself, and I think that Erdogan could be happy that… an EU-NATO country is supportive,” he said.

Turkey and Hungary can certainly be described as odd allies, as Orban has often used nationalist, anti-Muslim language in his fight against allowing refugees into the country.

“The anti-Muslim rhetoric did not… weaken the Turkish-Hungarian relationship,” Kreko said, adding that Orban also favors Turkey’s entry into the EU despite the possibility that this could lead to a mass migration of low-paid Turkish workers.

During last week’s meeting, the Hungarian leader said he was supportive of Erdogan’s plan to send Syrian refugees back to Syria and a “safe zone” Ankara says it wants to establish in the northeastern part of that country, adding that Hungary would help with reconstruction projects there.

“We have to do everything to avoid masses of migrants arriving at Hungary’s southern border, and for that we need Turkey’s help,” Orban said at a joint news conference with Erdogan.

The Turkish president has threatened the EU that he would “open the gates” to another wave of migration if his plans for a safe zone in Syria are not supported.

“For Turkey, it’s useful to have Hungary on its side,” Wolf Piccolo, co-president of the risk analysis firm Teneo Intelligence, told The Media Line, adding, however, that when it comes to Russia, Turkey has moved much closer, especially in terms of security.

Russian interests in Turkey are far-reaching considering Ankara’s increasing presence in Syria. Turkey is also valuable geopolitically, with a shoreline on the Black Sea, where Moscow has naval bases, and with the Bosporus Strait running through Istanbul, which Russian ships use to head to the Middle East.

Has stated that Turkey would be much more useful in Russia’s attempts to destabilize NATO compared to Hungary, which is more limited due to its membership in the EU. However, he still believes Moscow’s eye is on both NATO members.

“As far I observe Turkish foreign policy,” Piccolo said, “I think there is also a motivational factor of Russia here in Turkish-Hungarian relations.”