A Palestinian man throws back a tear gas canister during clashes with Israeli forces following a demonstration marking “Land Day” in the occupied West... 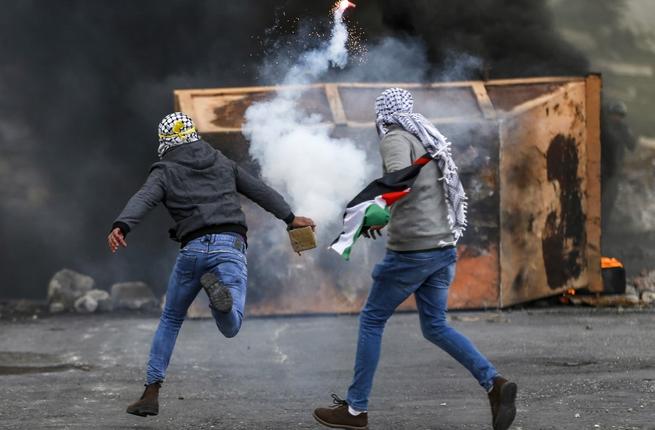 A Palestinian man throws back a tear gas canister during clashes with Israeli forces following a demonstration marking “Land Day” in the occupied West Bank on March 30, 2019. (AFP/ File photo)

“Yet another example of how Netanyahu uses electoral politics to justify occupation and undermine the two-state solution,” presidential spokesman Ibrahim Kalin wrote on Twitter.

“If he is re-elected, will this be a triumph of ‘democracy’ or occupation?” Kalin asked.

“Will western democracies react or will they keep appeasing?” he said, adding: “Shame on them all!”

Netanyahu vowed to annex the occupied West Bank if he wins the general election which is slated for April 9.

He said in an interview with Israeli television: “We will ensure that we are in charge on the ground. And we will impose sovereignty over the settlements in Judea and Samaria [West Bank].”

“Netanyahu’s irresponsible statement to seek votes just before the Israeli general elections cannot and will not change this fact,” Cavusoglu said.

International law views the West Bank and East Jerusalem as “occupied territories” and considers all Jewish settlement-building activity there as illegal.

The Palestinians, for their part, want both these territories — along with the Gaza Strip — for the establishment of a future Palestinian state.