WASHINGTON — President Trump said Monday he would release his long-awaited Mideast peace plan on Tuesday as he welcomed Prime Minister Benjamin Netanyahu of... 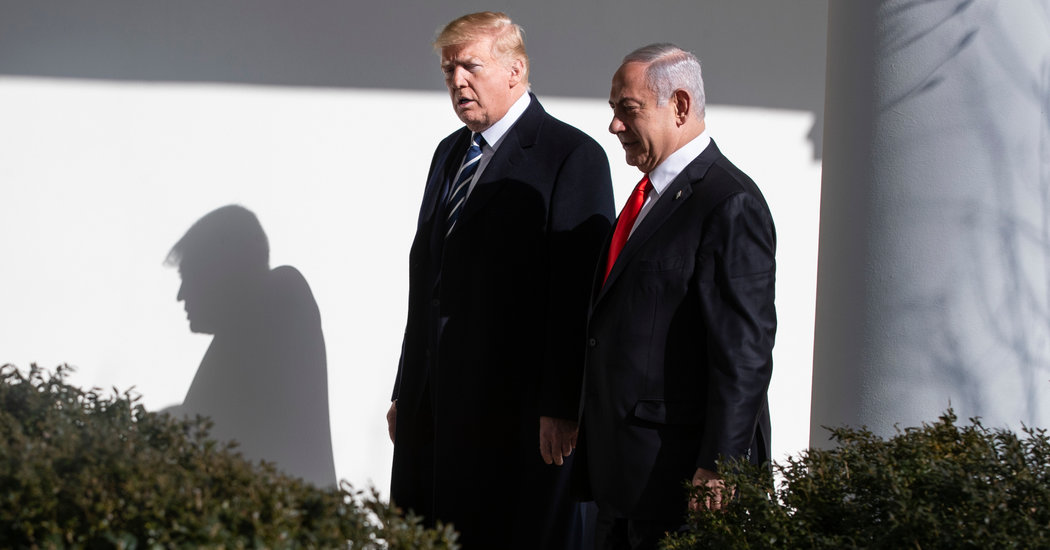 WASHINGTON — President Trump said Monday he would release his long-awaited Mideast peace plan on Tuesday as he welcomed Prime Minister Benjamin Netanyahu of Israel to the White House for two days of meetings.

“Tomorrow at 12 o’clock, we’ll be announcing a plan,” Mr. Trump said, confirming reports that he would unveil a proposal, nearly three years in the making, that aims to resolve one of the world’s most intractable conflicts.

Speaking alongside Mr. Netanyahu, Mr. Trump said that “it’s the closest we’ve ever come” to an agreement between the Israelis and Palestinians, an opinion almost unanimously rejected by analysts and foreign diplomats who see it as heavily weighted in favor of Israel.

While Mr. Trump predicted that “we will ultimately have the support of the Palestinians,” that seems a distant prospect.

Many analysts say the Trump peace plan, developed under the oversight of the president’s son-in-law, Jared Kushner, is relevant mainly for its potential impact on Israel’s upcoming March 2 election, which will decide the fate of the embattled Mr. Netanyahu, and as a distraction from the Senate’s ongoing impeachment trial of Mr. Trump.

Mr. Netanyahu’s opponent in that election, Benny Gantz, is also in Washington and will meet with Mr. Trump on Monday and return to Israel before Mr. Trump and Mr. Netanyahu deliver public remarks together at the White House on Tuesday.

Mr. Gantz’s allies have complained that the joint appearance inappropriately elevates Mr. Netanyahu, who has been a close Trump ally, over Mr. Gantz.

The unveiling of the peace plan will occur as Mr. Netanyahu’s bid for parliamentary immunity from prosecution on corruption charges gets underway in Israel, just five weeks before he faces Mr. Gantz in the March 2 election.

The two are battling in Israel’s third election in a year after ballots in April and September ended inconclusively, with neither Mr. Netanyahu nor Mr. Gantz able to muster a majority government.

“One can’t ignore the obvious domestic political context to everything that is going to happen in the next couple of days, both here in the United States and in Israel,” said Robert Satloff, executive director of the Washington Institute for Near East Policy. “In my view, that drives what is about to happen as much as Middle East peace may drive it.”

Speaking in the Oval Office alongside the president on Monday, Mr. Netanyahu showered his host with flattery.

“You’ve been the greatest man Israel had in the White House,” Mr. Netanyahu said. “I think tomorrow you can continue making history.”

The details of the peace plan are not known, but the proposal is likely to place both Mr. Netanyahu and his opponent in a quandary.

It could force Mr. Netanyahu, who is fighting for his political future and his freedom — he is facing charges of bribery, fraud and breach of trust — out of his risk-averse comfort zone and put his credibility with his supporters, and his legacy, on the line.

Any direct or implicit green light from Washington for unilateral Israeli annexation of the Jordan Valley and Jewish settlements on the West Bank is likely to increase the pressure on Mr. Netanyahu from his right-wing partners to move ahead immediately.

“The time for talk is over — full sovereignty now,” Naftali Bennett, Mr. Netanyahu’s defense minister and the leader of a right-wing party Mr. Netanyahu depends on for support, urged last week on Twitter. “Within two weeks we must impose sovereignty over all the settlements.”

Unilateral annexation, however, is not without risk, and something that Israeli leaders, including Mr. Netanyahu, have avoided for decades.

For one thing, it could undermine Israel’s strategic peace treaties with Jordan and Egypt. It could also fuel Palestinian unrest or a violent reaction, costing lives on both sides.

For Mr. Gantz, leader of the centrist Blue and White party, embracing the plan could alienate his more left-leaning supporters and send them back to their more traditional political home, the left-wing Labor-Meretz alliance, tipping the electoral scale away from Mr. Gantz.

If Mr. Gantz rejects the plan or gives it a lukewarm reception, that could send his more right-leaning supporters back to Mr. Netanyahu’s Likud or other parties in the right-wing bloc, likewise snatching away the chance of a slim victory.

At a minimum, the peace plan will complicate Mr. Gantz’s efforts to focus Israeli voters’ attention on the cases against Mr. Netanyahu in hearings over the coming days about the prime minister’s request for immunity.

As for the weak and ailing Palestinian president, Mahmoud Abbas, acceptance of the plan is impossible since it does not meet the most minimal of Palestinian demands. But refusal leaves his people divided between the West Bank and Gaza, with no state and no road map for the future.

“It is nothing but a plan to liquidate the Palestinian cause,” Muhammad Shtayyeh, the prime minister of the Palestinian Authority, said at a cabinet meeting in the West Bank city of Ramallah on Monday.

Speaking to reporters Monday, Mr. Trump sounded energized by the scale of the challenge before him.