A Turkish army armoured vehicle advances in Syrian city of Tel Abyad, as seen from the Turkish border town of Akcakale ... 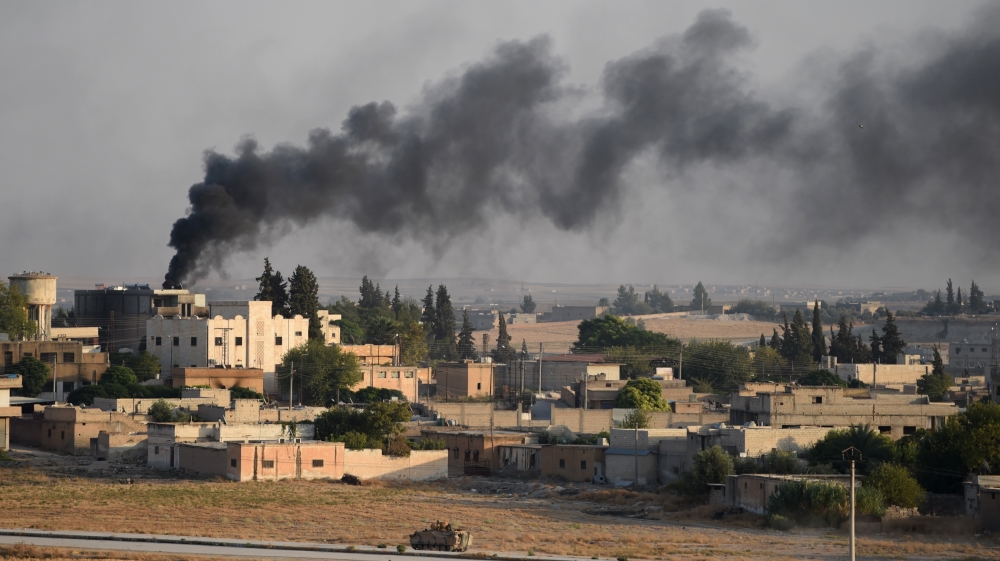 US President Donald Trump on Monday said that in response to Turkey’s operation in northeast Syria he will soon issue an executive order authorising sanctions against current and former Turkish officials, stop negotiations with Turkey on a $100bn trade deal, and boost tariffs on Turkish steel to 50 percent.

In a statement in which he vowed to swiftly destroy the Turkish economy if it continues down “this dangerous and destructive path”, Trump also said that US troops coming out of Syria will redeploy and remain in the region to monitor the situation.

“Turkey’s military offensive is endangering civilians and threatening peace, security and stability in the region,” Trump said in a statement he released on Twitter.

“I have been perfectly clear with [Turkish President Recep Tayyip] Erdogan: Turkey’s action is precipitating a humanitarian crisis and setting conditions for possible war crimes,” he added. “Turkey must ensure the safety of civilians, including religous and ethnic minorities, and is now, or may be in the future, responsible for the ongoing detention of ISIS terrorists in the region.”

Trump’s announcement came as US politicians ramped up their pressure on the administration to take action over Turkey’s military operation against Kurdish fighters in northeast Syria, now in its sixth day.

Erdogan said the offensive is aimed at removing the Kurdish-led forces from the border area and create a “safe zone” to which millions of Syrian refugees can be returned.

Turkey’s move came after Trump announced the US was withdrawing its troops from the area, leaving the Syrian Democratic Forces (SDF), its main ally in the battle against the Islamic State of Iraq and the Levant (ISIL or ISIS) armed group, without US military support.

Trump’s decision was met with sharp criticism from Democratics and many within his Republican Party, with party leaders calling for sanctions on Turkey over its operation in Syria.