Trump in 'No Rush' to Make Trade Deal With China 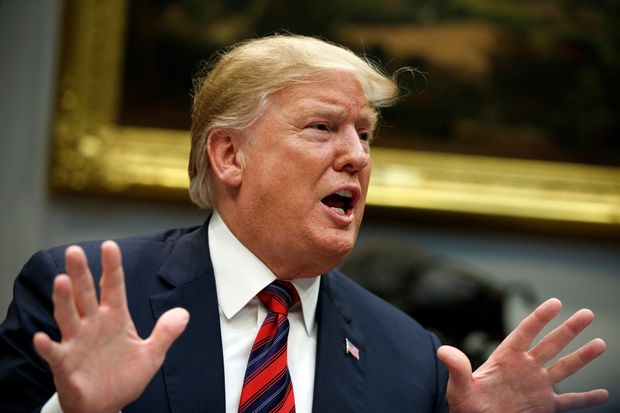 President Trump said Wednesday that China ‘very much wants to make a deal.’

WASHINGTON—President Trump warned Beijing Wednesday that he would not sign off on a trade deal that didn’t meet U.S. demands, in a sharp departure from his recent optimism.

Following a White House meeting with his advisers, Mr. Trump told reporters that he was “in no rush” to make a trade deal, which he contrasted with what he said was Beijing’s impatience.

“China very much wants to make a deal,” he said. Mr. Trump added that Chinese President Xi Jinping understands that he would walk away from a weak offer, as he had done last month in the Hanoi summit with North Korean leader Kim Jong Un.

“Trump can use this for leverage and could also be mindful he would be criticized for a weak deal,” he said.

The Chinese Embassy in Washington didn’t immediately respond to a request for comment.

Prospects for a trade deal have been on a roller coaster of late. U.S. officials are trying to figure out whether special envoy Liu He, China’s vice premier and a close Xi ally, can press the vast Chinese bureaucracy to make the concessions sought by Washington.

Those include firmer protection of intellectual property, a sharp reduction in subsidies and massive purchases of agricultural goods, services, natural gas and other products.

Mr. Trump is following the talks closely. He is meeting regularly with his top trade advisers and keeping close tabs on the progress of videoconferences between U.S. Trade Representative Robert Lighthizer and Mr. Liu.

Last month, Mr. Trump told reporters that a deal was within striking distance, speaking optimistically about a summit with Mr. Xi at his Mar-A-Lago, Fla. estate to finish negotiations by the end of March. “There’s a chance something very exciting could happen,” he said in an Oval Office session on Feb. 22 with Mr. Liu

Now a March agreement looks unlikely, say U.S. officials, who are talking instead of an April date. Mr. Xi is headed for Europe around March 21 and negotiators in both countries had hoped to wrap up an agreement in time for the Chinese leader to tack on a Mar-A-Lago visit at the end of his tour. That could reduce criticism Mr. Xi might receive at home for traveling to the U.S. and agreeing to make concessions to the U.S.

If that schedule doesn’t work out, it isn’t clear when a meeting could be arranged. Mr. Trump is scheduled to travel to Japan at the end of May, and he could add a China trip. Chinese officials had earlier asked him to meet Mr. Xi in the Chinese resort island of Hainan.

But Mr. Trump’s advisers convinced him to turn down the Chinese offer for political reasons similar to those facing Mr. Xi: the country playing host to a signing conference could have an advantage if it puts on the table last-minute demands.

On Tuesday, Mr. Lighthizer said the two sides could be “in the final weeks of an agreement.”

Substantively, the two sides continue to haggle over many parts of what Mr. Lighthizer says is a text of between 110 and 120 pages. Enforcement is at the heart of the dispute.

Mr. Lighthizer has laid out a plan where U.S. companies bring complaints about Chinese behavior to the U.S. government, which would try to resolve them through a series of consultations with Chinese counterparts. Under this plan, if that didn’t work, the U.S. could retaliate with tariffs.

U.S. officials say that they are looking for assurances that Beijing wouldn’t match those tariffs with their own sanctions—a big demand for any sovereign nation, especially one which complains that it was abused by the West for centuries.

Hudson Institute China scholar Michael Pillsbury, who consults with the administration, said that China is unlikely to publicly commit not to retaliate, though a more informal arrangement might occur.

“There is a case to make aspects of the agreement confidential between the US and China,” he said, pointing out that the two nations have signed covert agreements in the past. During the Reagan era, for instance, the U.S. quietly agreed to sell advanced weapons to Beijing so it could become a more powerful counterweight to the Soviet Union.

Write to Bob Davis at bob.davis@wsj.com and Alex Leary at alex.leary@wsj.com