Al-Arabia, Saudi Arabia, July 10 Trump ordered a military strike on Iranian targets but decided to back down at the very last minute because... 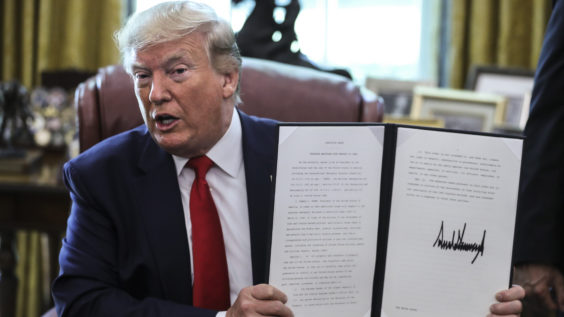 Trump ordered a military strike on Iranian targets but decided to back down at the very last minute because a respected general appeared on Fox News, saying an attack would be a mistake. The name of this four-star general is Jack Keane, and he voiced similar concerns about some of the President Trump’s decisions in the past. For example, Keane strongly criticized Trump when the latter decided to withdraw all US forces from Syria following a phone call with Turkish President Recep Tayyip Erdogan. Both Trump and Keane know very well that the US drone that was shot down over the Strait of Hormuz, which warranted a US response against Iran, was not targeted accidentally. But Keane provided Trump with the right excuse at the right time, given the president’s reluctance to go to war with Iran. This decision was certainly not received well. It resulted in Trump’s critics comparing him to his predecessor, Barack Obama, who in August 2012 threatened to use force against the Assad regime if the latter used chemical weapons against civilians. Assad crossed this red line but the White House did not react. Trump built his reputation as a strong and aggressive man by painting Obama as a weak and cowardly leader. This humiliating comparison, which personally insulted Trump, made him come out in declarations to the press that he was not a dove, not a hawk, but a rational man. Trump may have made a mistake in refraining from striking Iran, but the fact remains that the current administration maintains a firm and decisive strategy to punish the aggressive Iranian regime. This is in contrast to president Obama, who did not have any strategy in Syria and chose, instead, to leave the country in an effort to appease the Iranian regime. The Iranians tried to provoke Trump in more than one way, with statements and slogans, and then by deeds, but the White House remained steadfast in its strategic position to crack down on the mullah regime. Tehran tried to turn Trump’s secretary of state against his national security adviser, and both of them against Trump himself. But this effort did not succeed. After the decision to cancel the strike, Iran’s propaganda machine, with the help of the anti-Trump media and a handful of its loyalists in the western world, began to circulate false reports that the president had been pressured by some members of his administration to strike Iran. The Iranian foreign minister, Jawad Zarif, even mocked Trump for being “manipulated” to enter a war he does not want to enter. But Trump eventually had the last say when, just a few days later, he imposed new sanctions on the Iranian leadership in a clear sign that he was serious and unafraid of escalating the situation with Iran. This step helped him restore his image to an extent. Consequently, the Iranians have lost hope in Trump. They now know that he is fully aligned with his closest aides in his effort to strangle Iran economically in a strong and comprehensive manner. If war with Iran is to take place, it would happen at a time that best suits Trump, not when it is most convenient for Tehran. – Mamdouh Mahini (translated by Asaf Zilberfarb)