President Trump’s acquiescence to Turkey’s move to send troops deep inside Syrian territory has in only one week’s time turned into a bloody carnage,... 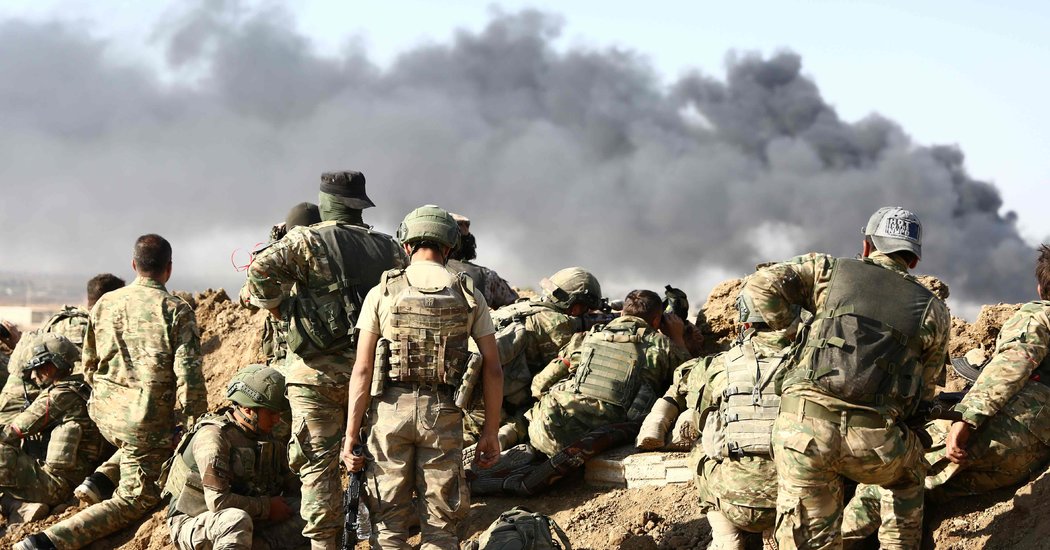 President Trump’s acquiescence to Turkey’s move to send troops deep inside Syrian territory has in only one week’s time turned into a bloody carnage, forced the abandonment of a successful five-year-long American project to keep the peace on a volatile border, and given an unanticipated victory to four American adversaries: Russia, Iran, the Syrian government and the Islamic State.

Rarely has a presidential decision resulted so immediately in what his own party leaders have described as disastrous consequences for American allies and interests. How this decision happened — springing from an “off-script moment” with President Recep Tayyip Erdogan of Turkey, in the words of a senior American diplomat — likely will be debated for years by historians, Middle East experts and conspiracy theorists.

But this much already is clear: Mr. Trump ignored months of warnings from his advisers about what calamities likely would ensue if he followed his instincts to pull back from Syria and abandon America’s longtime allies, the Kurds. He had no Plan B, other than to leave. The only surprise is how swiftly it all collapsed around the president and his depleted, inexperienced foreign policy team.

Day after day, they have been caught off-guard, offering up differing explanations of what Mr. Trump said to Mr. Erdogan, how the United States and its allies might respond, and even whether Turkey remains an American ally. For a while Mr. Trump said he acted because the Islamic State was already defeated, and because he was committed to terminating “endless wars” by pulling American troops out of the Middle East. By the end of the week he added 2,000 — to Saudi Arabia.

One day he was inviting Mr. Erdogan to visit the White House; the next he was threatening to “totally destroy and obliterate” Turkey’s economy if it crossed a line that he never defined.

Mr. Trump’s error, some aides concede in off-the-record conversations, was entering the Oct. 6 call underprepared, and then failing to spell out for Mr. Erdogan the potential consequences — from economic sanctions to a dimunition of Turkey’s alliance with the United States and its standing in NATO. He has since threatened both, retroactively. But it is not clear Mr. Erdogan believes either is a real risk.

The drama is nowhere near over. Out of necessity, the Kurds switched sides on Sunday, turning their backs on Washington and signing up with President Bashar al-Assad of Syria, a man the United States has called a war criminal for gassing his own people. At the Pentagon, officials struggled with the right response if Turkish forces — NATO allies — again opened fire on any of the 1,000 or so Americans now preparing to retreat from their positions inside Syria. Those troops are trapped for now, since Turkey has cut off the roads; removing them may require an airlift.

And over the weekend, State and Energy Department officials were quietly reviewing plans for evacuating roughly 50 tactical nuclear weapons that the United States had long stored, under American control, at Incirlik Air Base in Turkey, about 250 miles from the Syrian border, according to two American officials.

Those weapons, one senior official said, were now essentially Erdogan’s hostages. To fly them out of Incirlik would be to mark the de facto end of the Turkish-American alliance. To keep them there, though, is to perpetuate a nuclear vulnerability that should have been eliminated years ago.

“I think this is a first — a country with U.S. nuclear weapons stationed in it literally firing artillery at US forces,” Jeffrey Lewis of the James Martin Center for Nonproliferation Studies wrote last week.

For his part, Mr. Erdogan claims nuclear ambitions of his own: Only a month ago, speaking to supporters, he said, he said he “cannot accept” rules that keep Turkey from possessing nuclear weapons of its own.

“There is no developed nation in the world that doesn’t have them,” he said. (In fact, most do not.)

“This president keeps blindsiding our military and diplomatic leaders and partners with impulsive moves like this that benefit Russia and authoritarian regimes,” said Senator Jack Reed, the Rhode Island Democrat and longtime member of the Armed Services Committee.

“If this president were serious about ending wars and winning peace, he’d actually articulate a strategy that would protect against a re-emergence of ISIS and provide for the safety of our Syrian partners,” Mr. Reed added. “But he has repeatedly failed to do that. Instead, this is another example of Donald Trump creating chaos, undermining U.S. interests, and benefitting Russia and the Assad regime.”

The other major beneficiary is Iran, perhaps Mr. Trump’s most talked-about geo-political foe, which has long supported the Syrian regime and sought freer rein across the country.

But none of that appeared to have been anticipated by Mr. Trump, who has no fondness for briefing books and meetings in the Situation Room intended to game out events two or three moves ahead. Instead, he often talks about the trusting his instincts.

“My gut tells me more sometimes than anybody else’s brain can ever tell me,” he said late last year. He was discussing the Federal Reserve, but could just as easily been talking foreign policy; in 2017 he told a reporter, right after his first meeting with President Vladimir V. Putin of Russia, that it was his “gut feel” for how to deal with foreign leaders, honed over years in the real estate world, that guided him. “Foreign policy is what I’ll be remembered for,” he said.

But in this case the failure to look around corners has blown up on him at a speed that is rare in foreign policy and national security. The closest analogue may date back to 1950, during Harry Truman’s administration, when Secretary of State Dean Acheson described America’s new “defense perimeter” in a speech, saying it ran from southern Japan through the Philippines. That left out the Korean Peninsula, and two weeks later Joseph Stalin, the Soviet leader, appeared to have given Kim Il-sung, grandfather of the current North Korean leader, permission to launch his invasion of the South. The bloody stalemate that followed lives with the United States today.

At the time, the United States kept a token force in South Korea, akin to the one parked along the Turkish-Syrian border. And it is impossible to know whether the North Korean attack would have been launched even without Mr. Acheson’s failure to warn about American action if a vulnerable ally was attacked — just as it is impossible to know if Mr. Erdogan would have sent his troops over the border if that phone call, and Mr. Trump’s failure to object, had never happened.

It was Mr. Trump himself who, during a presidential debate with Hillary Clinton in 2016, blamed President Barack Obama for a similar error. “President Obama and Secretary Clinton created a vacuum the way they got out of Iraq,” he said, referring to the 2011 withdrawal. “They shouldn’t have been in, but once they got in, the way they got out was a disaster. And ISIS was formed.”

Even his allies see the parallel. “If I didn’t see Donald Trump’s name on the tweet I thought it would be Obama’s rationale for getting out of Iraq,” Senator Lindsey Graham, one of Mr. Trump’s most vociferous defenders in recent years, but among his harshest Republican critics for the Syria decision, said last week.

As James F. Jeffrey, who worked for Mr. Obama as ambassador to Turkey, then to Iraq, and now serves as Mr. Trump’s special envoy for Syria, noted several years ago, it’s debatable whether events would have played out differently if the United States had stayed in Iraq.

“Could a residual force have prevented ISIS’s victories?” he asked in a Wall Street Journal essay five years ago. “With troops we would have had better intelligence on al Qaeda in Iraq and later ISIS, a more attentive Washington, and no doubt a better-trained Iraqi army. But the common argument that U.S. troops could have produced different Iraqi political outcomes is hogwash. The Iraqi sectarian divides, which ISIS exploited, run deep and were not susceptible to permanent remedy by our troops at their height, let alone by 5,000 trainers under Iraqi restraints.”

Mr. Trump may now be left to make the same argument about Syria: That nothing could have stopped Mr. Erdogan, that the Russians would benefit in any case, that there are other ways to push back at Iran. Perhaps history will side with him.

For now, however, he has given up most of what little leverage he had.