LONDON — The tour operator and airline Thomas Cook said on Monday that it had collapsed, leaving hundreds of thousands of travelers stranded and... 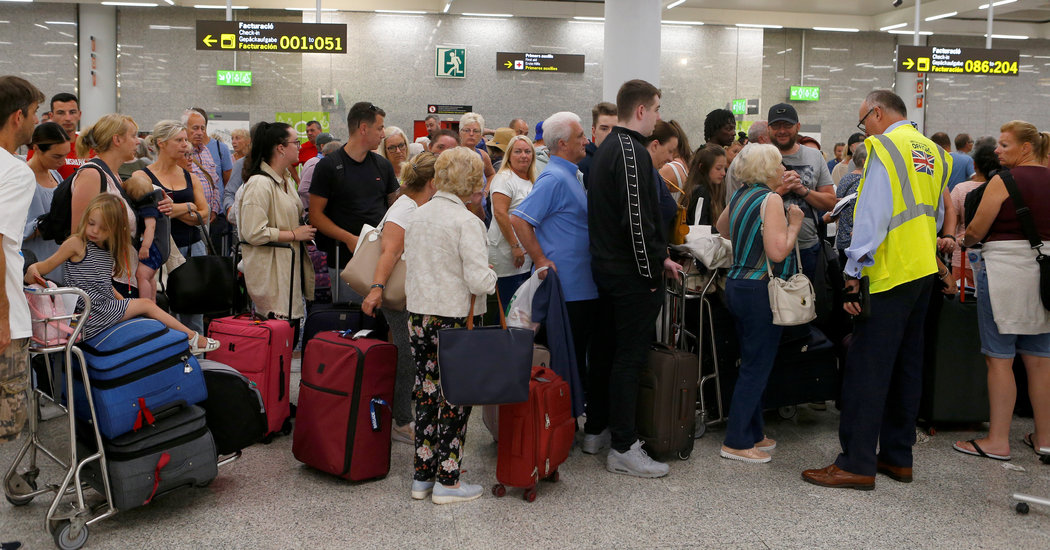 LONDON — The tour operator and airline Thomas Cook said on Monday that it had collapsed, leaving hundreds of thousands of travelers stranded and scrambling to find a way home, after last-minute negotiations to obtain necessary financing for the debt-ridden company fell apart.

“We are sorry to announce that Thomas Cook has ceased trading with immediate effect,” the company said in a post on Twitter, and the Civil Aviation Authority in Britain said that all Thomas Cook bookings, including flights and vacations, had been canceled.

The liquidation of the world’s oldest travel company has set in motion what was being described as the biggest peacetime repatriation in British history, as the government announced plans to bring back 150,000 Britons. An estimated 600,000 people were believed to be stranded around the world, according to the BBC, and it was not immediately clear what would happen to those who are not British.

The tour operator specialized in low-cost package holidays that included flights to and hotels in more than 60 destinations around the world.

The BBC reported that the government had chartered 45 jets to get people home. Airlines including easyJet and Virgin were providing planes, the BBC said, with some being flown in from as far away as Malaysia.

The Civil Aviation Authority said it was working with the government to support passengers scheduled to fly back to Britain with Thomas Cook between Monday and Oct. 6, the agency said in a statement on its website, though the transport secretary, Grant Shapps, cautioned that what is known as “Operation Matterhorn” would not “be entirely smooth sailing.”

The aviation authority told passengers who were booked on Thomas Cook Airlines flights not to go to British airports, “as your flight will not be operating,” and warned that the repatriation effort would not include any outbound flights from Britain.

It also noted that it had contacted the hotels hosting Thomas Cook customers, who booked their accommodation as part of a package, to tell them that the cost of their stay will also be covered by the government. The announcement alleviated fears that travelers would be unable to leave their hotels until payment was settled.

On Saturday, some British tourists described being stopped from checking out of their hotel in Tunisia over concerns the hotel might not be paid.

The company was struggling with debts approaching 2 billion pounds, or nearly $2.5 billion, forcing it to enter negotiations with shareholders and creditors to obtain at least an additional £200 million that eventually failed. With no other choice, Thomas Cook ceased operations.

Before the collapse, Prime Minister Boris Johnson said the government would not intervene to save the airline, Sky News reported, saying that doing so would create a “moral hazard” because the possibility of a government bailout could encourage other companies to take risks.

Speaking to the British television network ITV, Mr. Shapps said that beyond the fact that “governments don’t usually go around investing in travel companies,” a bailout of Thomas Cook would most likely have only put off the inevitable by “stretching things out for a couple of weeks.”

“The company were asking for up to £250 million,” he said on “Good Morning Britain.” “They needed about £900 million on top of that, and they’ve got debts of £1.7 billion, so the idea of just spending taxpayers’ money on that just wasn’t really a goer.”

“Thomas Cook UK Plc and associated UK entities have entered Compulsory Liquidation and are now under the control of the Official Receiver,” the website read, instructing customers to visit a special Civil Aviation Authority website that had been established.

Andrea Leadsom, a Conservative member of Parliament and the current business secretary, said in a statement that the government intended to convene a task force to support the thousands of Thomas Cook employees who will lose their jobs.

“This will be a hugely worrying time for employees of Thomas Cook, as well as their customers,” Ms. Leadsom said. “Government will do all it can to support them.”

The government also said it would push to expedite an investigation into the circumstances around the company’s going into liquidation.